You are here: Home / Fiction / Action & Adventure / Wings of Honor by Jay Williams 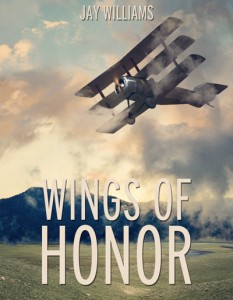 A ruthless, crazed serial killer terrorizes North Carolina. He’s not killing teenagers with a grotesque butcher knife, but instead shooting down unarmed, helpless small planes over the blue Carolina skies while flying a replica of the “Red Baron’s” triplane. If you want a fast-paced action/adventure novel about a battle between two men for the sake of honor, buy Wings of Honor and buckle up your seat belt for an action-packed flight.

What Inspired You to Write Your Book?
In 1978 the movie Halloween slashed its way across America’s movie screens. It concerned an evil killer who butchered innocent teenagers and seemed to be almost invincible. He also always popped up when we viewers least suspected him. We knew little about him except that he had escaped from a mental asylum and a few other details. Although I’m not a fan of slasher flix, when I wrote WINGS OF HONOR the idea of an unnamed, unknown killer intrigued me. However, the killer in my book seems more human than Michael Myers, almost like your neighbor next door. Plus, although he does pop up when other pilots least suspect, he’s not invincible.

I’ve included a few clues about the killer in the book, but they may be hard to find. I mention this because one of the tips we writers often hear is that when we submit work to editors don’t explain anything to them. However, often when I sent this book to an editor I’d get back a note stating —- was wrong (I’m not going to spoil the book). I’d write back “Yes it’s wrong. It’s a clue about the killer!” I don’t think the publishers liked that. Anyway, I hope you do like this book and can find some of these subtle clues.

Something else happens in the book that publishers didn’t like, but I included it because I wanted readers to understand that sometimes life can be random. Especially for the men and women who venture up to touch the sky. We never know what to expect. You’ll figure it out when you get to that part.

Also, there may be a few readers who do not know the odd slang and jargon of pilots. So I’ve included a few explanations and definitions (a glossary of sorts) in “The Pilots’ Lounge” at the back of the book. So buckle up and get ready for the many spins and loops in WINGS OF HONOR.

How Did You Come up With Your Characters?
Many of the characters are based on people I had a little contact with in the past. For example, Dave is based on the guy who taught me how to fly, Paul has a little of me in him, but also a couple of other pilots I used to know. As mentioned above about what inspired the book, the killer came about because of slasher films.

Book Sample
“Damn it, Dallas, idealism went out the window with the Carter administration. This is 1985. Don’t forget that even though we must project a clean, upright image to the public, we are bureaucrats. We do not trample on other bureaucrats’ egos to get the job done.”
The two became quiet again and Dallas moved back to his chair and sat down. He picked up the stack of papers on the right corner of his desk, straightened them out again, then put them back in the exact same place.
“So you want me to stop being so thorough?”
“No, all I want you to do is take it easy. Don’t push so hard when you don’t need to.”
“You mean, don’t push so hard when it might bother someone higher up.”
Fischer stood up, put his hands in his pockets and looked unemotionally at Dallas. “Just play it smart, Dallas. If you feel obligated to put something down that might piss someone off, let me know first.”
“No pissing.”