You are here: Home / Fiction / Historical / The Promise (The Lady Quill Chronicles, #1) by D.D. Chant 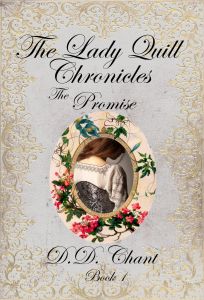 Orphaned as a child, Adele of Berron found herself betrothed to a stranger and hidden from the outside world until the day of her marriage. Forced to leave her home and those who have cared for her since infancy, Adele is thrust into the adventure of her life.
Rafe of Valrek, her companion through the dangerous web of intrigue she faces, has been promised to Adele since the battle for Calis destroyed both of their lives. His reckless decision to conceal his identity from her may destroy all he holds dear. Or maybe in each other they will find the ally neither ever dreamed existed.

What Inspired You to Write Your Book?
I came up with the idea for The Promise while I was writing my first book (Broken City). It didn’t start out as a Saxon romance but as a space opera, I’d imagined it as something like the Dune books. The trouble was that it just didn’t feel right and, after a lot of false starts, I suddenly realised that this story needed to be told in a historical setting. I love reading history books and the Saxon era was a perfect fit.

How Did You Come up With Your Characters?
The characters practically wrote themselves! I knew their back stories and the more I wrote about them the more they took shape on their own. I knew I wanted a strong theme of brotherhood and loyalty in the book. I also wanted Rafe to be extremely uncomfortable around women. So many books have the hero as a ladies man, I wanted to explore what would happen where the hero just couldn’t seem to relax around the heroine.

Book Sample
“It seems to me that you have done this before.”
“You mean setting up camp?”
“T’was more the looking after troublesome novices’ like myself that I was thinking of.” She smiled softly.
“Many is the lad who wished he had stuck to farming after a hard days march,” answered Rafe with a shrug. “I have seen none that handled their discomfort better than you; it takes a brave soul to suffer in silence.”
Eda looked slightly mollified at this utterance in praise of her friend, and Adele flushed with pleasure. Rafe found himself thinking that, after all, he might grow to like this strange girl-bride of his.
He reached out, taking the meat from off the fire. Its savoury smell reminded him that he was still hungry. He wrapped a piece in rye bread and held it out to Adele first, along with a wine skin. She accepted this last a little doubtfully, sipped it cautiously, and choked over the unfamiliar brew. Wrinkling her nose distastefully she handed it back to him before remarking that the pork tasted even better cooked over the camp fire.
“’Tis the cold and being hungry,” answered Rafe, passing a tasty morsel to Eda. “It makes you appreciate comfort more when ‘tis your good fortune to receive some.”
“You speak from experience.”
A statement not a question, said in that quiet husky voice of hers whilst her eyes fixed him in their peaceful gaze.
“I have spent much of my life in army camps, I cannot begin to tell you the wonder a proper bed holds for me!” grinned Rafe ruefully, stirring the fire with a stick.
“How long?” asked Eda.
Strangely he didn’t feel threatened by the question; it seemed the natural progression of the conversation.
“Since I was twelve; I went into battle with my father, and I was more than grateful to have him by my side.” Rafe dropped the stick and pulled up his knees, leaning his arms on top of them. “’Tis a strange thing a battle, most especially your first. When you take part you think ‘twill be glorious. You stand upon the battle lines viewing the magnificent ranks of your enemy, and you feel a strange fear mixed with elation, because it is the day you prove yourself a man and a warrior. Mail flashes in the sunlight, and you feel the nervous excitement of the unknown. ‘Tis an uncivilised emotion that grips you; a kind of thrill.”
He broke off, shaking his head in dissatisfaction. It was as if he could not find the words to express the sights, sounds, and feelings. Adele felt that it had somehow become more than an explanation to him; that since he had begun, he felt a burning need to present a true picture, one without embellishment or omission.
“You only feel it the once with that first battle, after that you are cured.” His voice was bitter, his face strangely haggard and troubled. “All too soon you see the hell of combat; men hacking grimly through the mess of soldiers, stumbling over the bodies of those who have fallen. There is a particular look in their eyes, no matter which side they fight for, of horror and pain… a deadness. Too soon it becomes obvious that there is nothing romantic in the sorry sight. Victory, when finally attained, is not courageous. Its glory, that seemed so bright, is tarnished and dirtied with mud, sweat, and the blood of men that should have been counted too precious to be spilt so rashly.”
He looked exhausted, thought Adele, as though somehow he were twelve years old again and looking at a battle field that had been burnt upon his childish soul, always to remain with him. A horror of youth lost and destroyed, an innocence that would never return.
Rafe told them no more. He told them nothing of the aftermath of battle which was, in its own way, just as horrific. He did not tell them how he had sat down in the mud beside a friend of his boyhood, knowing that he was dying, watching him slip away, but having no power to change the fact.
He had remained there, long after the boy had breathed his last, weary of soul and looking across the field of those slain. He didn’t tell them that it was there that his father had found him, so many hours later, as dusk had approached. Nor did he tell them how he had wept in his father’s arms, tears of bitter disillusionment and sorrow. He had realised it was a waste that would continue, an awful rite of war that would take place again, over and over.
Adele didn’t press him to speak again. He was lost somewhere deep in his own unhappy thoughts, experiencing a pain of which she knew nothing. She felt sudden compassion for him, a wish to comfort that surprised her. Finan of Gournay, of all men, had not seemed to have any need of the more tender compassions of life.