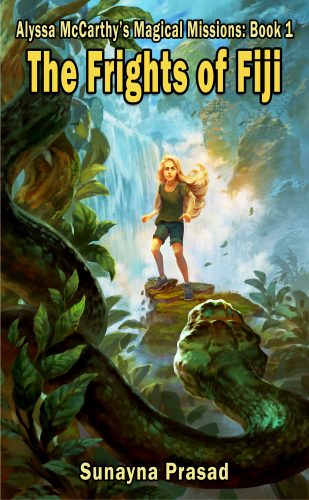 The Frights of Fiji by Sunayna Prasad A world of magic and adventure awaits… Sent to live with her strict, aloof, and uncaring uncle after her parents are killed in a car accident, twelve-year-old orphan Alyssa McCarthy longs for the life she used to have—one filled with fun and love. Then one stormy night, a message appears in the raindrops on the window that will change everything. "Your life will never be the same again, as magic will interfere." Before long, Alyssa is kidnapped by … END_OF_DOCUMENT_TOKEN_TO_BE_REPLACED

The Frights of Fiji by Sunayna Prasad A world of magic and adventure awaits… Sent to live with her strict, aloof, and uncaring uncle after her parents are killed in a car accident, twelve-year-old orphan Alyssa McCarthy longs for the life she used to have—one filled with fun and love. Then one stormy night, a message appears in the raindrops on the window that will change everything. "Your life will never be the same again, as magic will interfere." Before long, Alyssa is kidnapped by … END_OF_DOCUMENT_TOKEN_TO_BE_REPLACED 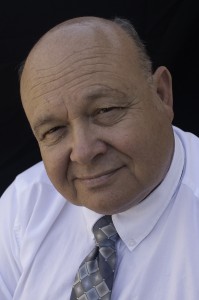 About J Richard Knapp: J Richard Knapp is an internationally recognized American author and speaker from the Pacific Northwest. His education includes degrees from the University of Oregon and Boise State university. Knapp is internationally recognized as a leader in education, bully prevention, and an author of many tween and young adult fiction books. J Richard Knapp is the Founder and CEO of Stop-Bullies.com, Magpye Publishing, and KnappStory.com. What inspires you to write? As a child, … END_OF_DOCUMENT_TOKEN_TO_BE_REPLACED 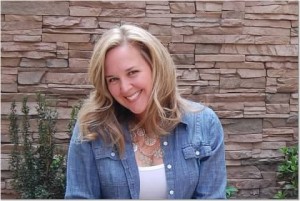 About Kelly Tonelli: Kelly Tonelli is a clinical psychologist working in private practice with patients who are experiencing life transitions, many of whom are teenage girls. She happily relocated from Michigan to Southern California to attend Pepperdine University and fell in love with the sunshine (snow is cold). She’s been fortunate to have spent time working and learning at Children’s Hospital of Los Angeles (CHLA) before going into private practice. She divides her time between her … END_OF_DOCUMENT_TOKEN_TO_BE_REPLACED

In the small isolated town of Richman there were no tall buildings or gas-filled planes to crash into them. When Alf Gant and his men rode through town tossing sticks of dynamite on that fateful day in the fall of 1875, they only destroyed a few buildings and killed a few people. A harmless old preacher. A young couple and their baby boy, who had come to town in a buckboard to do a little shopping. The problem was that the young woman in the buckboard was Sam Good's sister and her husband was … END_OF_DOCUMENT_TOKEN_TO_BE_REPLACED

As young Jim buries his father, a burning revenge rages in him. But what could a young teen in the old west really expect to do against hired gunhands? They called him a nester and after they killed his pa, he started calling himself Jim Nester. But what he needed was a six-gun solution. A tough, mysterious bounty hunter with a score of his own to settle helped him hunt the killers down. But Jim Nester knew that someday he would have to come back and fight the ruthless cattleman who had … END_OF_DOCUMENT_TOKEN_TO_BE_REPLACED

In one of the bloodiest battles of the War Between the States, he became known as Shiloh Stark by outshooting everyone else in his outfit. After the war he roamed the world in search of a peace he did not find. Ten years after the war ended, a tall man wearing dark clothes and two tied-down guns appeared in No Man’s Land, where there was no law and no peace. But Shiloh Stark was no longer looking for peace. He came prepared for war. Warning: Reading a Van Holt western may make you want to … END_OF_DOCUMENT_TOKEN_TO_BE_REPLACED

Heck Martin’s motto was simple. If they left him alone, he would leave them alone. Heck Martin was not pro-Union, like his father and brother. He had joined up with Quantrill to harass the bluebellies and other Union feds that thought they could tell others what they should be doing. But after the massacre at Lawrence, Kansas, he wanted nothing to do with Quantrill and his gang. Thirteen other hard-bitten veterans had followed him, had joined with him, but soon grew to hate him even more … END_OF_DOCUMENT_TOKEN_TO_BE_REPLACED

The War Between the States had just ended. But the war between Jeff Braden and the killers who had murdered his folks was just beginning. What he didn’t know was that the worst killer of them all was a likable young man that no one suspected. Warning: Reading a Van Holt western may make you want to get on a horse and hunt some bad guys down in the Old West. Of course, the easiest and most enjoyable way to do it is vicariously—by reading another Van Holt western. Van Holt writes westerns the … END_OF_DOCUMENT_TOKEN_TO_BE_REPLACED

The long trail means death in the Old West. But it’s a long and dangerous trail that Ben Russell must follow in his search for the men who murdered his father. Then it’s that other long trail for the killers when they go down before his blazing gun—the long trail to hell. Van Holt’s hellbound gunslingers always send the bad guys where they belong. It just isn’t safe for them anywhere in the Old West anymore. Of course, the gunsters and punksters of our own time will feel a lot safer when the … END_OF_DOCUMENT_TOKEN_TO_BE_REPLACED

Another wandering tale of revenge in the Old West begins with the brutal murder of Frank and Pearl Ryden and the wounding of their only son on the lonely Kansas prairie. They had come west after the Civil War looking for peace and safety and a distant farm a mysterious stranger had sold them a deed to. Another mysterious stranger saved young Jim Ryden’s life and taught him how to shoot as well as helped him track the killers all over the West—when he wasn’t too busy making war on a renegade … END_OF_DOCUMENT_TOKEN_TO_BE_REPLACED

The Circle 8 bunch were really just outlaws and rustlers. Their leader, Mort Dudley had a devious plan to get rid of a couple of his newly hired hands before the bunch cashed in the large herd of cattle that had fallen into their hands when they murdered the old man who owned the herd and had hired them on to help with the drive. Their trouble began when they tried to frame a quiet stranger for the old man’s murder. They didn’t know his real name or that he was a deadly gunfighter and the son … END_OF_DOCUMENT_TOKEN_TO_BE_REPLACED