You are here: Home / Fiction / Action & Adventure / The Stranger from Hell by Van Holt 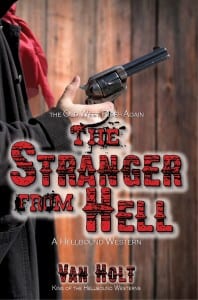 That was what Wade Miller seemed like to the bad guys—the stranger from hell. They were trying to hunt him down, but it soon seemed more like they were just making it easy for him to find them and send them where they belonged.

Miller didn’t know he was doing the devil’s work, bringing the baddies into the fiery fold. But he knew the country would be better off without the sons of bitches who were trying to kill him and lead three wild and beautiful sisters astray. The big stranger figured those girls just needed a man like him to tame them.

How is Writing In Your Genre Different from Others?
This is the real west. No Hollywood gloss overs. Real, barrel-of-a-gun survival in the Old West. Check out Van Holt’s Hellbound Westerns. You won’t be disappointed.

Author Bio:
What some reviewers have to say about Van Holt’s writing: