You are here: Home / Fiction / Fantasy / Soulbound by Christen Stovall 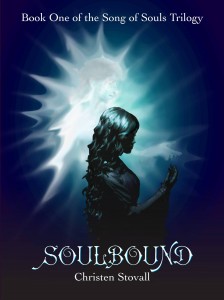 Living in the quaint farming village of Brittendell offered a simple life of home and family. When Aislynn, the daughter of a local farmer, and Rorin, the son of a wealthy horse trader, married, another charming love story enlivened the tranquil town. Aislynn and Rorin were profoundly connected, but their relationship came to a screeching halt when Rorin was killed in a tragic accident. Their bond sends Aislynn into a spiraling depression as she continues sensing Rorin’s presence. Soon, Aislynn finds herself thrust into a dangerous world of magic filled with hobgoblins, elves, and wizards. When Aislynn is captured by the future king of Venallis and forced to help him uncover a mysterious magical artifact she discovers that fate has far greater plans for her than she ever imagined. Perhaps death is not always the end.

What Inspired You to Write Your Book?
Six years ago, at age 28, and after a year and a half of marriage, my husband ended his life. I had always enjoyed writing, but as I progressed through the grieving process this story began to take shape in my mind. It took roughly four years of thoughtful planning before I was ready to begin writing. Once I started, the story seemed to flow from my imagination. It’s my hope that this book, the first in a trilogy, can serve as a legacy for the time I had with my husband.

How Did You Come up With Your Characters?
From my personal experience with loss. I was listening to music and a scene between a young woman and the spirit of her deceased husband began to play out in my mind.

Book Sample
The four companions were silent as they covered the final few yards to the forbidding wooden doors of the keep. To their surprise, there were no locks and no latches, only two enormous metal rings that hung from the mouths of grimacing gargoyle heads in the center of each door. They’re bright eyes were made of sparkling orange jewels that glowed as though filled with ghostly fire.
For several minutes, Aislynn and her friends puzzled over what their next move should be. Lyzandar examined the doors and the stone surrounding them to see if he could find any inscription that would reveal a password or spell, but the wood and stone were as smooth as polished glass. Ciaran attempted pushing against them though no one really expected success with the use of brute force. Even Rorin was at a loss, for when he tried to pass through the stately doors he found that they were as unyielding for him as they would have been when he was corporeal.
“Well, perhaps we should just try knocking,” Aislynn muttered leaning against the wall. It was getting dark and her patience and energy were waning.
Ciaran looked at her incredulously then shrugged and grabbed one of the heavy metal rings, slamming it down hard on the door. There was a resounding boom that they could hear echoing through the tower beyond the thick, sturdy doors. A gust of wind whipped around the four of them as the doors slowly moved inward, creaking on their ancient metal hinges.