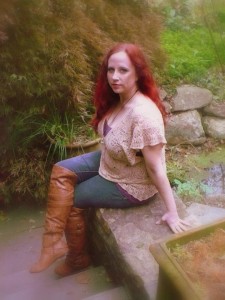 About Christen Stovall:
Christen is an avid reader who enjoys going on adventures whenever she can. Her love of fantasy started at an early age with fairytales and The Hobbit. She lives in Kansas in the home she shared with her late husband, Dustin, and their two dogs, Cora and Sophie. She first discovered a love of storytelling on the stage. In her late teens she began writing, a hobby that helped her through her husband’s death.

What inspires you to write?
I have always loved fantasy and have an out of control imagination. I often conjure up stories and images when I listen to music or need to pass the time. Sharing those stories with people is a truly rewarding experience.

However, Soulbound came from a very personal place. Six years ago I was widowed. I was 28, had been married for a year and a half, and found that the life I hoped to live was ripped away in an instant. It took some time, but eventually I turned back to my love of writing. The fantasy world provided a respite from pain, and a safe place to work through the grieving process.

Tell us about your writing process.
The first, and in many ways most important step in my process is a very large cup of coffee! Then I usually sit and listen to music for a few minutes, letting the sounds inspire my imagination. Then I sit down and begin my outline. I treat each chapter like its own story with points that it needs to hit in order to fit into the whole.

I often mentally cast each character with actors, models, etc. Having the visual aid helps me to write the character.

No matter what, I try to write just a little bit every day. Sometimes i end up deleting most of it, but the important thing is to write.

For Fiction Writers: Do you listen (or talk to) to your characters?
Oh, constantly! I often put myself in their minds and speak their dialogue out loud. It makes me look like a crazy person, but it helps me to get a strong sense of a character’s voice.

What advice would you give other writers?
Write! Even if you feel completely uninspired just write something, anything! It doesn’t matter if it”s good, or if you toss it in the bin, just write something. Writing is like working out, if you don’t keep it up, you backslide.

How did you decide how to publish your books?
I did quite a bit of research on the publishing process, both by traditional means, and independent. I decided to go indie because of the personal nature of my book. Though Soulbound is fantasy, I wrote it in tribute to my late husband. I wanted to retain all the rights and control to the story. I also wanted to get a higher percentage of the royalties.

That being said, I did not want to produce something of poor quality. I hired an editor and told her to be brutal. I swallowed my pride and listened to what she said. It helped me to grow as an author and I consider her a wonderful friend now.

Indie publishing does come with it’s own set of challenges though. It can be much more difficult to market books, and it is challenging to find stores that will agree to stock it. All the same, I think the benefits of having all the rights to my work, and a more frequent pay out, far outweigh the drawbacks.

What do you think about the future of book publishing?
Well, I hope that in the future authors are given more compensation and respect for their work. I think with independent publishing becoming more easily accessed and cost efficient we’ll see authors getting more and more opportunities to share their work with the world.

We’ve already seen a boom in self made celebrities via YouTube and other social media, I think it’s only a matter of time before the literary world sees the same thing.

What genres do you write?: High Fantasy