You are here: Home / Fiction / Fantasy / Journey to Chaos book 1: A Mage’s Power by Brian Wilkerson 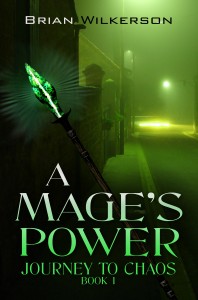 Tasio the trickster god believes that Eric Watley needs a change of vocation. Specifically, a switch from the corporate sector to something more hands on; mercenary. Now instead of wielding a pen and pushing papers, he’s wielding a magic staff and fighting monsters. While he develops his power as a mage, he performs odd jobs such as replacement security guard, caravan escort, and laundry washer. Those in The Trickster’s favor never have quiet lives and Eric is soon swept into a nation-wide conspiracy far above his pay-grade.

What Inspired You to Write Your Book?
I had a number of questions I wanted to answer; writing challenges that I wanted to do. First of all, I wanted to write a “modern magic” story because too often I saw stories about how magic was hidden in the modern age. I didn’t like it. I wanted to see what a modern world where magic was not hidden would be like. Second, I wanted to try a “Zero to Hero” plotline without giving my hero anything exceptional. Third, I wanted to write about the Trickster Archetype because I enjoyed reading myths and fables regarding it.

How Did You Come up With Your Characters?
The characters of A Mage’s Power came from a pool of hypothetical characters I created during pre-writing. This pool came from brainstorming characters to fill up the Dragon’s Lair mercenary company that would have a central role in the plot.

Book Sample
Tiza meet the huge monster’s charge head on. With a yell, she slashed its stomach, but was parried by its talons. The beak came down on her and a screen of solid light intercepted it. Eric grimaced at the impact and fell to his knees; his barrier dimpled and broke. Nolien’s, however, gave Tiza enough time to plunge her sword in the monster’s leg. It reared in pain and tried to rake her with its other leg, but Tiza dodged and stabbed that one too. The Cecri squawked in pain and fell backwards.
Tiza lunged to finish it off, but the Cecri spat gooey liquid at her. Caught off guard, she took it full in the face and screamed in surprise. While she furiously rubbed the gunk out of her eyes, the monster stood on its injured legs and struck with both beak and talon. Nolien blocked the beak, but Eric failed to stop the talon. It tore through his wall and struck her shield, lifting her off the ground and throwing her across the clearing. Her head collided with a tree and she went limp.
“Eric!” Nolien yelled as he ran. “Keep that thing busy!”
I have to fight this thing . . . alone!? Eric shook his head and steadied himself. He pointed his staff at the monster and concentrated. By channeling his mana through his staff, he could create a bolt far stronger than any he threw at Laharg. With a mental yell, he released the gathered energy at the monster.
The Cecri was knocked off balance and squawked in confusion. It turned from the fallen Tiza and towards the new irritant. Nolien used the distraction to chant a healing spell. Eric fired another bolt and sent its head reeling. Feeling confident, he met the monster’s eyes.
Cold fear hit him like a tidal wave. He froze. Couldn’t move, couldn’t think; helpless. Forced to watch that murderous beak come slashing down—
–and clang on a barrier. Eric blinked and the fear was gone. A sigh of relief shook his frame and his legs gave out. Nolien’s staff glowed faintly as he channeled his power through it. Tiza sat next to him, shaking her head. The monster continued to peck and slash the barrier, squawking in confusion when it couldn’t reach its prey. The screen of light cracked under the pressure.
Tiza jumped on the monster’s back and stabbed it. The Cecri let out a piercing shriek and all three dropped their weapons to cover their ears. The monster shook Tiza off its back and she dropped to the mud. It harpooned her. She rolled aside.
Eric looked for his staff, but to his dismay, he saw three. The bird’s shriek scrambled his mind. The Cecri stepped on Tiza’s stomach to hold her in place. Eric lunged for a staff and grabbed air. In horror, he looked to the monster in time to see it strike.
“To protect this friend of mine, make that monster blind! Dark Eye!” Darkness shot from Nolien’s staff and covered the monster’s face. It stopped an inch from Tiza’s neck and squawked in confusion. Tiza was again forgotten in favor of its lost sight. Tiza wiggled from under its talon and scurried to her feet. Is that how spells work? Eric retrieved his staff and improvised a spell.
“From its toe to its head make that monster dead! Death Spell!”
Nothing happened except the monster heard him and darted in his direction. A mana bolt knocked it off balance. It ran toward Nolien and he ran to a new hiding place.
“Attack!”
Eric nodded and fired his own bolt. It changed course again and Tiza fired a bolt from her sword. The monster stopped and lumbered for her. She ran and Nolien fired a second time. They continued their guerrilla attacks until the monster was exhausted.
“Tiza!” Nolien shouted. “Coup de grace!”

Buy Journey to Chaos book 1: A Mage’s Power On Amazon