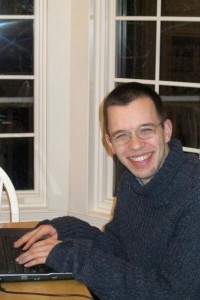 About Brian Wilkerson:
I grew up playing Final Fantasy and watching Power Rangers. Then one day I sat down to watch a programing block called “Toonami” and my life was never the same. It exposed me to Anime and later inspired me to write my first fanfic. That led to fanfiction.net. One night I thought, “I’ll write my own story from scratch. I’ll be a published author.”

What inspires you to write?
I have a playlist that I turn on for writing periods. These are high energy songs that get me moving (in fact, one of them popped into my head while I wrote this) and my creative juices flowing. Enjoying the stories of others (be it book, show or game) also helps. It’s like brain food.

Tell us about your writing process.
I try to outline but it rarely works for me. The stuff that I end up writing is always (always!) different from what I outline. It’s the nut and bolts that shift a story away from what I imagined. On the other hand, purely pantsing doesn’t work either. I had to overhaul the initial draft of Journey to Chaos book 2 because it had no sense of unity; just a series of events happening to my protagonist. I’ve decided to become a hybrid by keeping a rough idea of arcs and plotlines while charging ahead with the characters.

For Fiction Writers: Do you listen (or talk to) to your characters?
Sometimes I feel like I’m a scribe for Tasio the Trickster. It’s an eerie feeling to write his dialogue without knowing where he’s going with it. On occasion, he’ll break the fourth wall.

What advice would you give other writers?
A numbered list:
1. You are not original. Any idea you’ve written about has already been written by a dozen or more people. Tvtropes has established this as unquestionable reality.
2. Hire an editor because you can’t proofread your own work. It’s not a question of willingness to put in the time and effort. It’s a question of distance and authors are too close to your own work.
3. Write what you enjoy; what you would want to read. A trend is likely to pass by the time you publish a work catering to it but if you’re having fun, then readers will pick up on that.

How did you decide how to publish your books?
I was initially attracted to self-publishing by the degree of creative control afforded to independent authors. The typical royalties given to traditionally published authors was another encouragement to self-publish. What finally pushed me over the edge was the length of the process to traditionally publish. The prospect of getting turned down repeatedly by agents and publishers over the course of years was frightening.

What do you think about the future of book publishing?
I think self-publishing will continue to grow. There is infrastructure for them from editing to cover design to distribution of both digital and physical to advertisement. As time passes, “whose your publisher” will be asked less and less because it will no longer be assumed that all authors have one.

What genres do you write?: Sword and sorcery fantasy, urban fantasy, action/adventure,