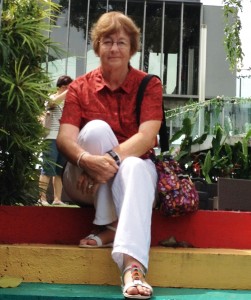 About Lucinda E Clarke:
I’ve been a professional writer for over 30 years, scripting for both radio and television and had numerous articles published in several national magazines. I’ve also written mayoral speeches and advertisements and currently write a monthly column in a local publication here in Spain. I had my own newspaper column once, until the newspaper closed down, but it wasn’t my fault honestly.
I was lucky enough to win over 20 awards for scripting, directing, concept and producing, plus two educational text books traditionally published. Sadly these did not make me the fortune I dreamed of to allow me to live in luxury.
I announced on radio – on one occasion with a bayonet at my throat – appeared on television and met and interviewed some of the world’s top leaders.
Setting up and running my own video production company, I produced a variety of programmes, from advertisements to corporate and drama documentaries on a vast range of subjects.
In total I’ve lived in eight different countries, run the ‘worst riding school in the world’, and cleaned toilets to bring in the money.
We moved from South Africa to Spain where I’m now pretending to be retired, having written 6 books in the last few years. Three of them have been bestsellers in genre on Amazon on both sides of the Atlantic. I give occasional talks and lectures to special interest groups. I am now busier than ever and there is still so much to see and do, I’m worried I won’t have time to fit it all in.

What inspires you to write?
I simply can’t help myself. If I don’t write every day I get these strange withdrawal symptoms and start to twitch. My fingers wriggle and dance around and if I’m out, I gravitate towards other people’s lap tops. I’ve been like that for as long as I can remember. I have all these characters dancing around in my head screaming to be let out. If I live to be another hundred years I would never have the time to write about all of them.

Tell us about your writing process.
Pretty chaotic just about sums it up. I have the backgrounds in my head and a ghost of an idea and then I sit and begin to write. I write very quickly – all those years having to meet broadcast deadlines – but I stop every now and again to fill in a time line and character descriptions. I can’t take any credit for any of my books as the characters take over and tell me what they are going to say and where they have decided to go next.

For Fiction Writers: Do you listen (or talk to) to your characters?
With my main heroine Amie, I find it difficult to get a word in edgewise. She is totally in charge and we have this love/hate relationship. She’s grown a lot in the first two books, but she’s also got a lot bossier. Three of my books are memoirs, so that was easier as I’m used to talking to myself. With my comedy book I was definitely the outsider looking in as I have never aspired to be a member of a royal family, nor live in a hovel as an illiterate peasant. I’m somewhere in between.

What advice would you give other writers?
Write. Just write. It might be good, bad or indifferent, but until you have the first complete draft down on paper you can’t start to improve it. People who keep saying they are going to write seldom do, real writers just go somewhere and write. A professional editor is vital – even after years of professional writing I’ve recently learned I put all my commas in the wrong places. Get the best book cover you can afford and then be prepared to market in one form or another 24/7. Give up all family life, friends, social occasions, celebrations and all other interests. You are now a writer.

How did you decide how to publish your books?
Over 20 years ago I had 2 books traditionally published by the big 5 – my royalties were pathetic. Yes, I had a nice advance, but I didn’t know then they take out all costs from future royalties before you see a penny. When I realized it was possible to self-publish (NOT vanity publishing) I was thrilled. This way I have complete control over copyright, promotions, covers and changes. Since you have to market even if the big 5 take you on, you might as well do it yourself from the beginning. In fact I have turned down one small publisher. It’s hard work but I don’t have to share my royalties with anyone.

What do you think about the future of book publishing?
I don’t think paper books will go away within the next 50 years – after that who can say? The rising trend is to buy books on line to match the immediate gratification generation. I think more and more writers will self publish, especially if the public mindset changes to see those authors as ‘real’ writers. I think there will be another large online book retailer who might give Amazon fierce competition. Monopolies seldom last forever.

What genres do you write?: Memoirs – literary fiction – humour/fantasy