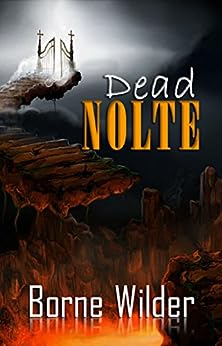 Dead Nolte is a strange and funny look at death and greed and the dimensions beyond our own. In the book, I pull no punches, nor make any apologies.

Nolte is among the foulest humans to ever walk the Earth and has been his entire life. The candidate least deserving of a final reward has learned how to cheat the system, avoid judgement and live forever, but before he can be raised from the dead, he has to die. Once he’s dead, everyone wants him to stay that way.

Nolte’s not about to let twenty-five years of planning go down the tubes without a fight, all he has to do to make his plan work, is throw the Reaper off his trail, double-cross a Canaanite deity, cheat Satan, avoid a team of Archangels, stave of Armageddon and retrieve the secret ingredient from his thieving sons. The good news is that he has three whole days to do it, the bad news is, he’s stuck in an adult diaper and shower shoes.

Despite its dark and gritty look at the ugly side of human nature, it’s impossible to read this book without laughing out loud.

What Inspired You to Write Your Book?
The death of my father. The character in the book pales in comparison to the real Nolte.
All the other characters are fictional, but Nolte is real.

When I was writing my first draft, I couldn’t keep from laughing, so I sent a copy to my brother. Having grew up around Nolte, he thought it was the funniest thing he had ever read. He didn’t really notice the abundance of profanity. I also sent a copy to a couple of reader friends, they too, thought it was hilarious, but had never seen a novel that contained so much profanity.

It took a lot of work to clean up Nolte and keep him real.

How Did You Come up With Your Characters?
As I said, Nolte was a real life troll, the rest I had to scrape up. I use people I know for characters, then I repaint them to fit the tale.

The wicked stepsisters are both loosely based on three women that I dated in the past. The angels are based on vampires from a TV show, the brief appearance of Satan is based on a guy that mugged me in a movie theater. The “stupid husbands” I’ll keep a secret, I don’t want to hurt anyone’s feelings.

“Junior-Junior.” The kid answered, bringing a grubby hand to his crotch, to pluck at himself.

“Imagine that.” It was obvious to Charlie, from the kid’s pixelated stare, that mommy let this one go right from the milkers to the video games. “Should you be out here by yourself, without a helmet?” Charlie asked as he brushed past him and up the steps to the back door.

“Are you Charlie?” the kid asked, sucking snot again. “My mom doesn’t like you.”

Charlie paused with his hand on the doorknob, “That’s okay kid; she told me she doesn’t like you either.”

He walked into the house without knocking; no one noticed. Either the overlapping chatter masked his arrival, or nobody could see him around Junior-Senior’s portly frame. It wasn’t long before the smell of cut onions and stale sweat, wafting off Junior, was encroaching on the same air-space Charlie’s nose was trying to use.

“Cute kid out there, is he yours, Jethro?” Junior startled forward. “He’s a chip off the ol’ block, isn’t he?” Charlie peeked past the curtains on the door to see the kid blowing his nose on the front of his shirt. “Yep, the apple didn’t fall far from the tree with that one, did it, Junior?”

Junior stepped further into the room trying to put some distance between him and Charlie, his size thirteens kicked the chair, Alice sat in. Whatever she had been smiling at was quickly forgotten, her facial expression changed fast enough to cause injury to her cheeks. She shared her immediate scowl between Junior and Charlie; Junior for not warning her of Charlie’s presence and Charlie for existing.

Charlie looked around the room, from face to face. Everyone in the kitchen looked back at him with the look one might have after discovering half a cockroach in the peanut butter, all but Ron, who was grinned from ear to ear.

“How was your bus ride?” Alice sneered, bum-rushing the high-ground with an air of superiority. I hope it wasn’t too bothersome.”

“Too bothersome?” Charlie repeated, chuckling. “Look at you, gittin’ yer hill talk all fancied up.” He purposely bumped the back of her chair reaching for the bottle of beer Ron held out to him. “I was presented with the opportunity of a more desirable mode of transportation.” Charlie guzzled the beer, washing some of the road out of his throat. “So this is what a hillbilly wake looks like? Y’all got a Sin-Eater a’comin’ to wash Nolte’s soul clean and shiny with Twinkies and Doritos?” Charlie glanced over at Junior and RJ, who were now side by side, Junior was attempting to form a solidarity with the larger male. “I ‘spect the onliest thing that’s missing from this wake, is lap dances from yer sisters, Fellas, when do they start?”

RJ’s face reddened and Junior looked even more confused than usual. Charlie looked at the bottom of his beer bottle to check the status of its contents and brushed past the two idiots, making himself at home in Nolte’s refrigerator. Taking a fresh one from the ‘beer shelf’, he handed his empty to Junior.

Junior’s everyday expression of confusion deepened, as he juggled with the complications the empty bottle had presented him. Should he set it down? Should he throw it away? His mind had not yet resolved the lap dance insult and now he had this damn bottle to contend with. He knew this was not a time for him to appear indecisive. Alice had warned him about looking stupid in front of the brothers. Junior tried to hand the bottle to RJ, who waved it off. Junior was stuck with it. His mind raced.

Junior seemed to have cataloged three facial expressions during the span of his life. Confusion, Nervous Confusion and the one that he used when confronted with multiple options, Deep Confusion. The latter, the one someone might expect to see on the face of Einstein, as he worked out the details of the atomic weight of space, was used by Junior when choosing socks or verbs. His mental limitations were a constant source of irritation to Alice. Charlie figured the poor son of a bitch was one life insurance policy away, from a nap in the freezer.