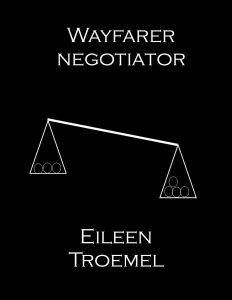 Adara faces a variety of negotiations starting with riots on a space station between Wayfarers and shop keepers. With Decker, Adara has to negotiate terms in their relationship. Avin gets his first case a murder which becomes three. Decker’s parents arrive to visit. Adara has to negotiate with his mother to get her to like her. Decker proposes, Chaos reigns – until Adara negotiates a settlement.

What Inspired You to Write Your Book?
In continuing the story of the crew of the Pritchard, I wanted to develop and round out Adara’s character. She keeps saying she’s just a pilot but she’s more than that. In Clans, I brought in her family. In Immemorial, I expanded to make Decker a bigger role and some of the other crew. In Negotiator, Decker and Adara hit some bumps in their relationship . She withdraws because it’s always worked for her but in this one, she has to learn how to grow and deal with conflict.

How Did You Come up With Your Characters?
The unfriendly mother – Decker’s mother doesn’t like Adara. I know it can be a cliche but I wanted Penny to be snotty, aloof, and not like Adara at all. The conflict between the two helps Adara grow and face some of her own insecurities. It also forces Decker to step up in a different way to protect her.

Book Sample
The office was grimy, furnished minimally with battered metal furniture most of which was in disarray. The windows covered with old, faded and torn curtains. The walls yellowed and dingy. In the center of the room, a body lay on the floor. Adara gasped, taking a step back. Franklin put a hand on her arm. “Not seen a dead body before,” he asked.
“Not like this,” she said. She swallowed hard taking several long slow breaths. “I’m all right.”
Avin, careful of any evidence, walked around the body. “I can smell the same suspect who was at the last scene. The pattern of wounds is the same. The mask with the tape on the mouth is the same. I believe she was drugged like our previous victim. I think more heavily than the first victim or perhaps repeatedly.” The tech, recording the scene, panned around the room slowly. He centered on the body while Avin stepped back.
“He took more time with her,” Avin said. “I smell more of him. He lingered longer. I don’t sense sexual assault but the scent of him is stronger.” He moved away from the body to different areas of the room. Stopping at an overturned cabinet, Avin said, “He sat here for a time. There’s the scent of something sweet, like a flower but not one I recognize.”
“Is it possible he smoked something,” Franklin asked.
“It’s not the common tobacco substitutes or illegals,” Avin said. He walked around the area several times, circling the cabinet. “It’s a unique scent, one I’ve not experienced before,” Avin said. “He returned to this spot often.”
“Is it possible she passed out several times, so he sat there waiting,” Adara asked. She tried not to look at the body on the floor.
“There are smudge prints here,” Avin said. “It’s possible.”
“He brings her here,” Franklin said. “He drugs her, tortures her, and has to wait because she keeps passing out. Why didn’t someone hear her scream?”
Adara looked at the body. She said, “She’s wearing a skirt. With this drug would she feel him touching her?”
“Yes,” Franklin answered.
“It’s obvious then,” Adara said. “He probably threatened to rape her. Look at how straight her skirt is, like it was pulled down to cover her. What if he brought her in, she’s gagged or maybe unconscious. He wants to question her but he can’t risk someone hearing her scream. He pushes her skirt up or maybe shoves his hand under it and threatens her with rape to get her to cooperate.”
“Why would she keep quiet,” Avin said. “Her only hope is to call out and get help.”
“She’s immobile. She can’t move or even breathe. Screaming is going to take a lot of her remaining air but more the only way she can hope to get him to stop whatever he’s doing is to talk him out of whatever he’s doing,” Adara said shuddering. Now she had looked at the woman, she couldn’t look away. Flashes of her own torture ripped through her.
“So he has her gagged,” Franklin said. “He gives her a demonstration of how ruthless he is by hurting her.”
“When you’re frightened, there doesn’t need to be pain,” Adara said. She tried to shake off the memories. “Even today, one in four women experiences some sort of sexual assault. Rape is a very real fear for a lot of women. This woman worked in a mining camp where she was outnumbered. She probably dealt with a great deal of sexual harassment no matter how good the company is at protecting their employees. He’d only have to push her skirt up, put his hand on her legs or her vaginal area to make his point.”
Franklin and Avin stared at her. Placing a comforting hand on her arm, Avin asked, “Were you assaulted?”
“In the care home,” she said. “Girls were raped by the foster father in the house. I was lucky and was only molested.”
“So he threatens her,” Franklin said clearing his throat. “As a show of good faith he pulls down her skirt to cover her up.”
Adara nodded, “He can take off the gag and question her. He has the two tools, stabbing her and raping her to threaten her with.”
“He doesn’t get the answers he wants,” Avin said. “Otherwise she wouldn’t be dead.”
“Or maybe he does and it means he has to kill her. She’s seen his face. I don’t see a way for her to survive this. Or maybe she bleeds out faster than he expects,” Adara said.
“He took his time. It could be he enjoys torturing women more than men,” Franklin said.
“He took time to sit here and indulge in whatever it is I’m smelling,” Avin said. “She’s lying on the floor maybe begging for her life, offering to tell him anything and he’s getting pleasure from it.”
Adara wrapped her arms around herself. “Or she’s not telling him what he wants and he’s getting angry about it but knows he needs to keep his cool. Is it possible whatever this is you’re smelling is something to calm him?”
Without thinking, Avin asked, “Is that what you would do? Wouldn’t you tell him anything to make him stop?”
Adara stared at the floor. Franklin said, “Avin, she didn’t.”
Avin started to apologize realizing his gaff. Adara put a hand on his arm. “This isn’t about me. It’s about her. We don’t know what she would have done. Can you track him or the scent of whatever he indulged in?”