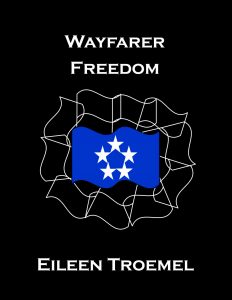 Following the loss of the Pritchard, Adara and Decker get great news only to be faced with a more loss. Struggling with loss and grief, they return to Command. Decker wants a bigger ship with more people. Adara’s afraid she won’t be able to protect their people. Pulled into negotiations, training, and prepping for a new ship, Adara couldn’t possibly have time for more but there is always more.

What Inspired You to Write Your Book?
What do pilots do when they aren’t flying? This book is about how Adara fills her time when she doesn’t have a ship to fly. She is out of her normal environments and adjusting to her new situation.

How Did You Come up With Your Characters?
Often in life we are faced with many griefs hammering at us at once. In this book, I wanted to show how Adara and Decker could face those. I also grounded them. This book is almost entirely set at Command station where Adara is not flying at all. This is a stressful situation for her. Stress upon grief can have a severe affect on a person and this is what I wanted to explore with Freedom.

Book Sample
Adara strode across the market place. Decker caught his breath seeing her compact curves, bright face, and smile just for him. As soon as she saw him, her face lit up. She started to rush until Paul put his hand on her arm holding her back as a group of people cut them off. Frowning, Decker watched as Paul shifted Adara between himself and Erica. Concern gripped his gut, he worried she’d had problems.
As soon as the group of people passed, Adara waited for Paul’s nod and hurried to Decker. “Hi,” she said as she leaned down to kiss him. “How was your morning?”
“Meetings, interminable meetings about the ship,” Decker growled but he eyes twinkled with excitement.
“You love it,” she teased. “Paul, you and Erica are going to eat right?”
“Yes, ma’am,” Paul said as he saw Erica seated at the table nearest Decker and Adara. “I’m going to patrol and I’ll be back.”
“Did you have problems,” Decker asked.
“No,” Adara said. She leaned in to quietly ask, “Did you know Frey has a secret door into her offices?”
“No,” Decker smiled, “But it doesn’t surprise me. How did your meetings go?”
“Good,” Adara said looking at the menu. “I’m going to take on all three of the negotiations.”
“What are these about,” Decker asked rubbing her back, needing to have his hands on her.
“I’m working with the Delphinians on a trade negotiation, three Avis pilots would like assistance with negotiating their contracts, and the third one is a personal negotiation,” Adara said. A tall thin blond woman in black pants and shirt approached their table to take their order. Decker and Adara rattled off their preferences.
“What’s the personal one about,” Decker asked.
Grinning she said, “You know these are confidential.”
“Uh huh,” Decker said. “Is it some top secret business deal?”
“No,” Adara laughed. “A husband wants to negotiate with his wife.”
“For what,” Decker said incredulous.
“A second child,” Adara laughed. “I meet with the wife in a few days.”
“You already know what the problem is,” Decker said.
“Yes,” she said. “I love you.” She leaned over, kissed him.
“I love you, too,” he said surprised. “Is there a particular reason?”
“You don’t have old fashioned ideas,” Adara said. Erica rose as a man approached their table. She stepped between Adara and the man.
“Excuse me,” he said to Erica. “I know I’m intruding. Could I have a minute with Lieutenant Commander Stone?”
Erica didn’t move, stood with her hand on her weapon. Adara frowned, “It’s all right, Erica. Mr. London, what can I do for you?”
Erica stepped aside allowing the tall man to greet Adara. “Captain, Lieutenant Commander,” Martin London said. “I know you probably want nothing to do with me but let me assure you, I’ve severed ties with my previous employer.”
“You no longer work for the ambassador,” Decker said, he gestured to a chair. Martin took a seat.
“No,” he said. “I know you’re busy, I won’t take up much of your time.”
“What can I do for you,” Adara said.
“I’ve been in my position for a long time, not just with the ambassador but with a variety of people,” Martin said. “Some of them I’ve liked and some I’ve had solely a professional relationship.”
“Is this your way of saying you didn’t like them,” Decker asked.
Martin only stared at Decker not acknowledging his statement. “I understand you probably associate me with the ambassador,” Martin said. “I hope you can overlook my previous employer. I’d like to offer my services as an assistant.”
Adara leaned forward, “Why aren’t you working for the ambassador?”
“We parted ways,” Martin said, red washing into his cheeks.
“Why did he fire you,” Decker asked.
“I didn’t say,” Martin said he stopped abruptly. “I have to maintain a professional demeanor with my employers. I’ve worked with a variety of people but I couldn’t go along with his current behavior.”
“You spoke up for me and he fired you,” Adara said quietly.
Shrugging Martin said. “I want to work with someone I can respect. I heard you needed an assistant, I’d like to put in for the position.”
“How did you hear about it,” Decker asked.
“I have a friend who works in Admiral Chesnik’s office,” Martin said.
Decker looked at Adara. She said, “I did what you asked.” Their order arrived and the server asked if their guest wanted anything.
“I don’t want to take up any more of your time,” Martin said. Handing a crystal to Adara he asked, “Here’s my data. I think we could work well together.”
Adara reached out a hand to shake his. He took her small hand in both of his. “I’ll review your data and be in touch,” Adara told him softly.
As he walked away, Decker said, “You’re going to hire him, aren’t you?”
“I’m going to review his data,” Adara said.