You are here: Home / Fiction / Historical / The Sons of Brabant by Michael Bolan 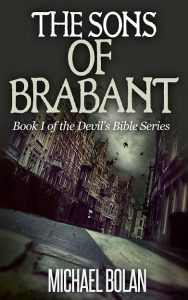 Europe is on fire. Fuelled by religion, politics and power, war rages across the continent, pitting father against son, and brother against brother.

In the wake of such conflict come horrific famine and deadly plagues. Rumours begin to surface of the End of Days, of the Four Horsemen of the Apocalypse and the violent Renaissance of Mankind.

As Europe burns, betrayal and feuding rages in the Brabant family. Why does Reinald, the powerful yet dishonest Duke fear his younger siblings so? How will headstrong Leo and noble Willem outsmart their older brother, and take back what is rightfully theirs? And what of Isabella, their troublesome younger sister, whose fiery temper lands her in love and in trouble…

Vowing to put right the wrongs of their family and bring an end to their brother’s deadly plans, Willem, Leo and Isabella must chart a course through war, famine and pestilence.

Meanwhile Reinald forms an unlikely and deadly alliance with a megalomaniac, a warmonger, and a deranged yet brilliant scientist, hell-bent on seeing their holy mission through to its grisly conclusion.

Can the Sons of the King of Brabant survive? Help appears from the most unlikely of places…

What Inspired You to Write Your Book?
I grew up I a culture of story-telling, surrounded by monuments that predate the Pyramids, so it was only natural that I wanted to share my stories. When I started travelling, I learned that everyone has their own stories, and the weird things is that they all overlap, sooner or later. So I decided to write a story which would be (more or less) believable, and cross some of the borders that exist only in out minds and on maps.

How Did You Come up With Your Characters?
My characters are usually a mishmash of people I have met in my travels, or representations of the best and the worst of what mankind has to offer. Each of them has a little of myself inside them, but they have started to misbehave – they’re doing things on their own without me telling them…

Book Sample
“Tell me more of the book. What do you know?” asked the cleric in fevered tones.
“Well, it currently resides in the Royal Palace Library, in the heart of Prague castle, well-protected, well-defended, and with good reason. It is known as the Devil’s Bible and it is the key to our task, for the tales surrounding the book say that it will unlock the power of Armageddon,” responded Reinald. Seeing the look of confusion on Janssens’ face, he explained, “I had my informants prepare an overview of the book’s history for me. Somehow I could feel it was important.” The cleric nodded in approval.
Reinald continued, “Hundreds of years ago, in a small Bohemian monastery town two days’ ride east of Prague, there was a monk called Bohuslav, which means ‘Praise God’, who was a gifted scrivener. His artistry brought pages to life, glorifying God in the most pure manner. Bohuslav himself was a slovenly monk, given to earthly pleasures, who was protected by the other monks because of the beauty of his writing. However, the time came when his sins could not be ignored, or expiated, and the local Bishop sentenced him to be interred alive in the walls of the monastery.
“Bohuslav was desperate and made a bargain with the Bishop: if he could scribe a Bible which would glorify the Bishop for all of eternity, in one night, he was to be released from his sentence and from his monastic vows and allowed to leave as a free man. Knowing that this was but a stay of execution, the Bishop agreed. Bohuslav was left alone in the scriptorium, with ample food and light and such materials as he might need for his task.
“In the dim light of the writing room, the errant monk realised that he would never be able to complete his task and set himself to pray. When his entreaties to our Lord fell on deaf ears, in his desperation, he cried out to Satan, Lucifer, Azazel and the hosts of the Fallen to aid him. In return for their help, he offered his immortal soul.
“In the morning, Bohuslav was found, sleeping soundly by the fireplace. The monks could not believe that he had completed his task, but the evidence was hard to ignore. A massive book lay on the writing table, too big for any of the working stands. A clothyard in height, as thick as a man’s foot, it contained hundreds of sheets of fine vellum, upon which was written the entire Bible in Latin, and more; more work than a gifted scrivener could hope to produce in ten years.
“Bohuslav was released unharmed, with a prayer for his immortal soul from the Bishop, and went his merry way, at least for as long as he was in the mortal realm. Afterwards, I doubt his time was pleasant, if he really did make a covenant with Satan. It was only on further examination that a picture of Lucifer himself was discovered on one of the latter pages, directly opposite a picture of heaven. The monks realised that the Bible had been completed with demonic assistance and that this page had been added out of gratitude. The monks were fearful of the book’s power and immediately contacted their superiors in the Church, who determined that the book should be moved to the safest location that anyone knew of.
“To this day, it has been held under lock and key in a sealed vault within the stronghold of Prague Castle. The Swedes, the French, the Emperor – it seems that everyone is after it; that they are all aware of its power, although I doubt that any of them have the lore to unlock its secrets. If your visions are to be trusted, all of our plans must lead towards our acquiring the book, for it will be the vehicle through which we bring about the Second Coming.
“We must have the Codex Gigas. At all costs.”

Buy The Sons of Brabant On Amazon