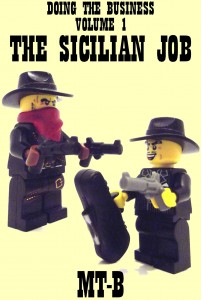 Business isn’t all about bottom lines, P/E ratios, gross margins, office affairs and IPO’s. No Siree! Sometimes it involves avarice, absurdity, paraphilia and an oddly distinctive Prince Albert. Such is the case in this comic tale about the titanic clash between two competing business models, one a Texan telecommunications company (a gung-ho bastion of capitalist gunocracy) the other La Cosa Nostra (a deeply conservative citadel of crime and corruption).

The bullets fly, as do pigs. The shit hits the fan and the fan fights back. The Indians are relaxed because the cowboys are preoccupied looking for an Italian take-out in the ultimate spaghetti western. But events do not begin deep in the heart of Dixie nor in Sicilia, that partially deflated football being kicked by Italia’s boot out of the Tyrrhenian Sea toward the Western Mediterranean, but in the decrepit post-industrial town of Middlehampton in the English Midlands.
After surviving the week from hell it was early one fateful Friday evening when Memphis Bell, the European CEO of Texan American Telecom (TAT), received an unexpected phone call from an unknown Sicilian. The caller conveyed a business proposition that he simply couldn’t refuse…..but then again Memphis didn’t want to.

Forget all those “phony” telco wars where companies “surfed” and “slammed” in order to steal customers from one another in this battle of the businesses the stakes are actually higher than some of the participants.

Along with their boss Silas Marshall TAT’s cowboys from the companies ‘Aching Butt Ranch’ ponied up, mounted up and moved on out across the pond to tackle the Mob. They were not intending to see Naples and die but they were going to Sicily to PROSPER! They were hot on the trail of George Custer, the company spy and his mysterious buddy Mister Smith both of whom had gone missing after leaving a trail of wreckage in their wake the scale of which inspired the Cosa Nostra to create their first reality TV show.

Meet the show’s stars as the Mafia get medieval on their ass. The get-rich-quick delegates of PROSPER! (TAT’s multi-level marketing subsidiary) wreak their good-natured havoc in Catania. The cowboys bring the Wild, Wild West to Italy’s deep South as they mingle and fraternise with the locals. Meanwhile TAT’s Executives scheme, plot and plan the weirdest anti-Mafia strategy yet conceived by man. Of course, not everything goes according to plan. In fact very little of it does……….Now read on!

What Inspired You to Write Your Book?
Just as Nature abhors a vacuum so I loathe the dearth of utterly puerile but funny literature and feel compelled to fill the void. When not altruistically motivated I mostly write to prevent terminal boredom. Earlier this year I learned that the rest of the world regarded me as too old for employment. Time hung heavy on my hands and no amount of scrubbing would remove it. What were my options in this age of austerity? A life of crime beckoned but the competition was stiff and well-established. A life of debauchery held immense appeal but, if anything, the competition was even stiffer than crime. My lack of computational and mathematical prowess precluded a life of Pi. So writing it had to be. I dutifully dusted off my words, jokes, cobwebs and dingoes and set about the task of creating an assemblage of words that I decided to call …. a book.

How Did You Come up With Your Characters?
Many of the characters are loosely based on, and hugely embellished, by many of the people I have had the great pleasure of working with during the course of my previous business career. Others are completely fictitious because they are essential to the plot. But….who is who?

That Was the Week That Was

At 18:15 on a Friday evening, Memphis “Telephone” Bell sat alone in his office contemplating a flying pig. Even by the exacting standards set by Texan American Telecom (TAT) it had been a particularly gruelling week and he felt the need for a moment of solace and reflection. Apart from his long-serving and long-suffering PA Josie “Calamity” James and a few members of the IT team, who apparently economised on accommodation expenses by living in the office, the place was empty which suited Memphis’ need for tranquillity just fine. Led by Charity Beaver the Marketing team had long since abandoned the workplace in favour of ‘The Sozzled Hog’, the local tavern where he was told they did their best creative thinking. Where they did their best drinking more likely retorted Memphis. Shortly after Charity’s merry marketeers had led the vanguard, nearly all of TAT’s other employees followed suit to impassioned cries of ‘TGIF’. Had he wished, he could have fired a cannon down the office’s main thoroughfare without endangering human life. Then again, firing a canon didn’t accord well with his desire for peace, quiet and introspection. Instead of unleashing an artillery fusillade he needed to ponder the week that he had just experienced.

Mondays were always hectic with the executive team ‘kick off’ meeting, the weekly report to his American bosses and the Board, one-to-one meetings with his remotely based executives and cash flow, switched traffic data, billing data and fraud reports to be reviewed. But this past Monday’s frantic routine had been enlivened, definitely a tastelessly chosen word he mentally chastised himself, by a jumper. Not a jumper in the form of a garish Christmas sweater with a festive jolly Santa or reindeer motif but a jumper in the form of a suicidal human being plummeting past the office windows onto the exit ramp of the parking lot eight stories below. For someone hell bent on self-annihilation the woman had chosen wisely and jumped head first thereby giving her about a five percent chance of failure. Failure, in this instance, being survival. Morticia Mordant, as she had been known to her Goth associates, had been addicted to meth, earned a crust as a ‘sex worker’ and had recently learned that she was HIV positive. Enough was enough she decided, it was time to make her mark on the world which she duly did last Monday. Literally considerate to the last Morticia had timed her swan dive to oblivion for mid-afternoon, the parking lot’s least busy period, so as not to inconvenience too many departing shoppers or office workers heading homeward at the end of their shift. However, Felicity ‘Grim’ Reaper, one of Memphis’ Human Resources team, had the misfortune to witness Morticia’s fall from grace. Her eye caught by the unexpected motion of Morticia’s flailing legs unwittingly drew her to the windows to catch her headlong Althusserian collision between the abstract and the concrete. Felicity found the spectacle so traumatic that her own human resources deserted her and she had to be taken home suffering from shock. It had been an impactful start to the week.