You are here: Home / Fiction / Romance / The Great Succession Crisis by Laurel A Rockefeller 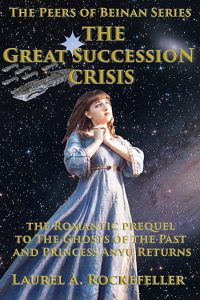 She never wanted to be a political pawn. She only wanted to succeed her mother on the throne.

Now more than just the Gurun dynasty is in danger as rival houses conspire to take the throne — at any price. Will Princess Anlei survive the Great Succession Crisis?

Romantic prequel to The Ghosts of the Past and Princess Anyu Returns.

What Inspired You to Write Your Book?
The Great Succession Crisis, The Ghosts of the Past, and Princess Anyu Returns were originally one book, a fan fiction story based on a 1980s television series. As I developed planet Beinan and wrote core portions of the story I discovered that what was emerging was something very different and unique to my imagination. I broke the single book into three — a two part mystery-thriller that became The Ghosts of the Past and Princess Anyu Returns — and a prequel young adult romance telling the primary back story to Ghosts and Returns that is The Great Succession Crisis.

Besides the world building (which is lavish and scientifically grounded), GSC is a fusion of Frank Herbert’s Dune and Cinderella rooted in my knowledge of medieval Britain. So it’s this beautiful mix of all three.

How Did You Come up With Your Characters?
The entire Peers of Beinan Series is grounded in everything I love best about classic science fiction. Characters in GSC in particular are rather archetypical. Lord Knight Corann could easily emerge from the pages of Arthurian legend if he were an Earth human. Princess Anlei emerged as a blend of several medieval noblewomen and princesses that I as a biographical historian have researched. Most of the other characters formed organically from the world building process itself and from my early love of the classics like Star Trek, Buck Rogers in the 25th Century, and original Battlestar Galactica.

Anlei smiled at the song. Blushing, she took his left hand, “Do you mean the words of the song, Corann?”
Corann played with a lock of her hair, “I think you know the answer to that, Your Highness.”
Anlei blushed, “I do; if only things were different. If only I dared believe that someone like me can have someone like you….”
“Take heart, Your Highness. Your life is not over yet. This great succession crisis has only just begun. Not even the wisest knows for sure how this will end up.” Noticing a signal from Bevin and Eisiq to head indoors for medical treatment, Corann bowed, “Now if you will excuse me, my liege, Lady Healer Cara is waiting for me.” Anlei nodded her consent and watched him leave.