You are here: Home / Interviews With Authors / Interview with Author – Laurel A. Rockefeller 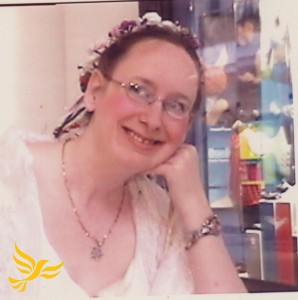 About Laurel A. Rockefeller:
Born, raised, and educated in Lincoln, Nebraska USA Laurel A. Rockefeller is author of over twenty books published and self-published since August, 2012. A dedicated scholar and historian, Ms. Rockefeller is passionate about education and improving history literacy worldwide. That is why her Legendary Women of World History Series biographies are absolutely free to schools and classrooms of six or more students upon request.

With her easy to understand fireside storytelling style, Laurel A. Rockefeller is the historian for people who do not like history.

In her spare time, Laurel enjoys spending time with her cockatiels, attending living history activities, travelling to historic places in both the United States and United Kingdom, and watching classic motion pictures and television series.

What inspires you to write?
I want to make the world a better place through my writing. Though many authors I know are motivated by money and write what they feel sells, I am motivated much more by artistic and educational considerations. Partially because I am visually disabled, my work has to sound beautiful to my ears before I will allow anyone else to read it or hear it (as is the case with my audio books).

Long before I put prose to paper, I wrote music and poetry. As a matter of fact my first national publication was a sonnet published by the American Tolkien Society’s “Minas Tirith Evening Star” in January, 1991 called “Why Bilbo?” So that poetic quality saturates my work. My narrative voice is often described as velvety or as fireside storytelling which is why my work translates so readily to audio books.

I really like sharing what I’ve learned and helping people learn something new without realizing they are learning anything, provoking thought and civil dialogue through educational and very socially responsible fiction and non-fiction. The world can be a better place and writers have such power to make it so. I am the historian for people who do not like history and the novelist whose subtle use of science and social science helps make learning fun again. I really love helping people and making their lives better and I write in large part to achieve that goal.

Tell us about your writing process.
My writing process really depends on whether I am working on fiction or non-fiction. With non-fiction history in particular, the first step for me is to familiarize myself with the time and place I am working with. For example, on my biography “Mary Queen of the Scots,” I started out knowing next to nothing about Scotland and Scottish history. So I began by watching documentaries about Scotland and its history — anything and everything I could find from reputable sources. I had to orient myself to what life in Scotland is really like and the cultures from across history that have at one time or another called that beautiful country home. Interestingly enough I learned more about pre-Roman Britain during this stage of the work than I did writing “Boudicca: Britain’s Queen of the Iceni” in March 2014.

Once I have my foundation in place, I move more and more specific to the people and events directly covered by that specific biography. I collect all my sources together in a rough version of my “suggested reading” list (which I later refine and organize to make it easier to use by readers) and I almost always write out the timeline. This is a useful resource for readers, but its primary purpose actually is to outline the book. History is not about dates for me and I am no better at remembering dates than you are. So the timeline is key to the writing process, allowing me to understand what happened, when, and how events relate to each other.

With the timeline in place I simply begin writing and the rest of it is not consciously planned, though continuously research. I follow where the data takes me.

Now with fiction, it does work differently. In general I have a plot outline in my head before I start and I may in fact write it out in a physical notebook, along with other details I develop (eg., how different characters are biologically related to one another, a subject that gets very complicated whenever I’m dealing with a feudal monarchy such as in the “Peers of Beinan” series books). However, what I write in the outline and what the final version of the book becomes can be radically different.

I think with “Ghosts of the Past” I followed my outline more closely than with any other books/novellas in the Peers of Beinan Series — but that goes with writing the middle chapter in a trilogy. Middle chapters in trilogies are the fastest and easiest to write because you have a clear starting and ending point and story arc to follow. To put this in perspective, Ghosts of the Past is around 400 pages long — but it took me only about six months to write it. However both books one “The Great Succession Crisis” and three “Princess Anyu Returns” took well over a year each to write despite being around 150 pages. The difference is the writing process — neither of those books had nearly as clear cut story arcs as Ghosts of the Past. And to be perfectly honest, if I had to pick just ONE of the Peers of Beinan Series books I consider “must read” it actually is Ghosts of the Past which is the very complicated, heart-pounding science fiction mystery where absolutely no one is guaranteed to survive to the end. GSC introduces you to the PoB universe and Returns tells you who did it and why — both of which are important, but not nearly as much fun, especially if, like me, you are a fan of “Sherlock” starring Benedict Cumberbatch and Martin Freeman.

Having written both fiction and non-fiction I actually think I listen to and talk to the real people whose lives I am exploring much more than I do with characters coming out of my imagination. With minor characters (an epic like “Ghosts of the Pasts” have dozens of minor characters) my interaction with them is rather minimal. They become like the “red shirt” characters in the original Star Trek series and I do not really form any attachment to them.

That’s in huge contrast with the real people I study for the biographies. For example, I studied Scottish Protestant reformer John Knox for both “Mary Queen of the Scots” and “Queen Elizabeth Tudor: Journey to Gloriana.” Knox became very much alive in my mind and my imagination, especially because I so fiercely dislike him over his blatant and shameless misogyny and the way he had no difficulty at all recommending casually killing women. So yes, while I worked I found myself yelling at him at times, making counter arguments against his and gaining a real sense of the complicated relationships both Queen Elizabeth Tudor and Queen Mary Stuart found themselves in with Knox.

What advice would you give other writers?
Never stop learning. Never stop growing. The subjects you think do not matter to your life are the ones you find yourself exploring as you work. So learn everything you can about as many things as you can. That includes hands-on learning. One reason I travel so much to historic places and attend so many living history events is because there is no substitute for first hand seeing and experiencing something. The more you know, the better you write and the more respected your work becomes by your readers.

How did you decide how to publish your books?
I always found traditional publishing very intimidating. My entire life I wanted to be published and wanted a career in writing, but I never really could figure out how to make that happen. Making the matter worse, my blood relatives have a very poor opinion of writers, artists, and other creative professionals so my whole life I heard that getting published was too difficult so don’t bother trying. I’m sure you’ve heard the same things.

Fortunately for me I decided to take the plunge and pursue this as my career just as technology made self publishing easy. Way back in 2003 I had looked into self-publishing a children’s book I wrote about a little coqui frog in Puerto Rico, but the costs to doing so were astronomical because the only available formats were paperback, hardback, and audio (via compact discs). Today’s digital media has changed all of that. Once I decided to write my first book, “The Great Succession Crisis,” the decision to self-publish became a no-brainer for me and I’ve been self-published on most of my book titles ever since.

What do you think about the future of book publishing?
Paperback books are definitely making a comeback and I think will continue to do so. I personally prefer a real book or an audio book over ebooks. Since I read a lot of non-fiction I find paperbacks easier to navigate.

Print on demand publishing is now king with independent authors and I think will continue to do so. I actually would like to see print-on-demand kiosks at shopping centres over the mega-bookstores that really only offer books from big name publishing houses. There are numerous examples of really terrible books becoming commercial successes from the big name publishers.

Part of the reason is a lack of brick-and-mortar access to independent authors. Print-on-demand kiosks could really change that with digital sampling through which a person can order a physical book printed on site in a matter of minutes. A fusion technology like this offers limitless book choices in a small commercial space easily accessed by the public.