You are here: Home / Bargains and Freebies / Bargain Books Under $3 / The Chronicle Gate Vol. 2: Alphine by N. Lang 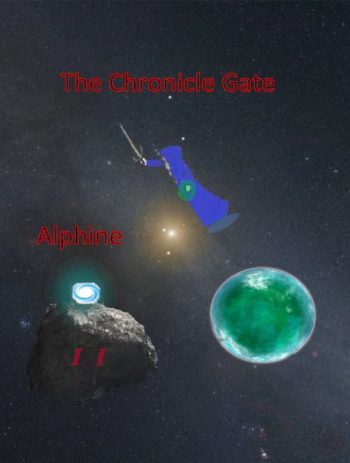 What if what once was beliefe… is now truth?

Sinya and Taylinn go off into space in search of Taylinn’s father, Jasper, and Sinya’s home world Earth. Along the way they meet new friends and explore new worlds by way of The Chronicle Gate but when Taylinn’s sister and friends from Ethereal get pulled into the battle of Mer-Dragons they all must learn to do the one thing they were taught was against the Fay Goddess law: Fight! Or Ethereal may be doomed to destruction. In order to learn to fight though they have to travel to Alphine, the plain of the Fay! Discovering a mystery about the Elousen race.

What Inspired You to Write Your Book?
I first had the idea when a friend of mine bought me “Inkheart” by Cornelia Funk then after that series I began reading other middle grade fantasy books like “Fablehaven” by Brandon Mull “The Chronicle of Narnia” by C.S. Lewis and became hooked. Other fantasy books inspired me too like “Magic Kingdom of Landover” series by Terry Brooks, “Gatemage” by Orson Scott Card and “Books of Umber” by P.W. Catanese. I started working on this trilogy in 2006 after I wrote my urban fantasy novel “The Lost Angels.”

How Did You Come up With Your Characters?
When I was in Jujitsu at twelve, I remember seeing kids as young as five years old taking lessons so drew and mixed from those experiences. But instead made my characters around seven and eight.

Book Sample
1 : Beyond the Gate

With his face to the glass, Sinya’s heart sped up. “Mom, Dad. I’m home,” he whispered. While the planet got closer, his eyes got bigger. He could see the houses in his mind right now. See his parents’ faces. His mother, head of curls, would shower him with kisses. His tall dad, compared to his mother, would be in his suit and top hat, embracing him. His babysitter would demand to know what happened to him at once, most likely. She and Karla are almost the same, he thought. A hug from the teen and a stern lecture.
Sinya didn’t care. He was home. Taylinn steered the ship at an angle so they could make out a cluster of shiny stars
near the planet that looked as if they didn’t belong. A creepy feeling crawled up Sinya’s back. “Are those stars?”
Sinya looked at Taylinn who stared out the window.
“Ships. I think I’ll stay on this side.” She looked at him. “I thought your parents build ships?”
“Only on other planets. Never seen a ship up close before except this one.” They descended toward the left side of the planet. Sinya’s stomach lurched as the ship fell from space. Vast colors swarmed in front of Sinya. Neon blue, piercing white light. He blinked to adjust his eyes until they could see the clear sky and the bright sun he had to shield his eyes. Approaching the earth’s surface, he stared out in the distance to see blue and pink colors. Tips flashed from the reflection of the sun. The lush green grass of the clearing that they headed, he saw the same group of silver stars. Or, as Taylinn called them, ships. Sinya wiped tears from his eyes as the ship came to rest on the field. His hand print was left on the window when he took it away and
ran down the ramp as it lowered toward the ground. I can’t believe I’m home! At least there’s people here. Most of all I miss my parents and friends though.
Sinya felt more tears coming to his eyes as he looked around. To his left the emerald field stretched across the land. To his right, the cluster of silver, pointed ships. On closer inspection, Sinya noted they had a green moon symbol on all six of them at the bottom.
“Stay away from them,” Taylinn ordered. Sinya spun to see her coming down the ramp, holding a cloak in her hand. She tossed it to him. “Put it on, so we’re somewhat hidden.”
“Hidden from what? I’m human.”
She looked toward the darkened path before them. “Something doesn’t feel right. My tail can sense it.” She went on ahead.
Sinya threw on his cloak and followed.
They trudged on through the grass and some mud, which Sinya slipped in a couple of times. The sun was low, the moon to their left appeared faded, waiting to become full. Sinya looked ahead and saw that they approached a city. His heart swelled, and he burst into tears. He could already feel the fuzz of his father’s jacket. Smell a sweet fragrance coming from his mother’s dress when he hugged them both. He wiped his cheeks and smiled. Mom, Dad, I’m coming, he thought.
Taylinn froze and held her arm out to stop Sinya from going any further. “We’re not alone,” she whispered. A fog appeared and swarmed around them. Sinya grabbed Taylinn’s arm. He became very cold. When the fog departed the children were surrounded by humans wearing black shirts with a symbol. A circle of rings. They all held their palms out toward the kids. Sinya squeezed Taylinn’s arm. He began to shake and whimper.
A couple of the humans spoke in different languages.
Sinya swallowed. We’re going to die, he thought. Sinya felt Taylinn slip her hand underneath her cloak then stopped when a man in a hat spoke.
“What do you think, general, Kal? Think they’re spies?” one of them asked in basic language.
“They’re only children.” A female with blond hair lowered her hand. Then she spoke in another language.
A man with sunglasses stepped toward Taylinn and sized her hand. “They may be children, but they could still be spies.” He held her hand up and took the ring. “See, stolen property. And it’s not even human,” he said, throwing off the hood of her cloak to reveal her fur. “As I thought. Spies.”
“Run!” Taylinn ordered.
Sinya panicked and before he knew it a group of the people were on top of them. Sinya kicked and screamed but it was no use. Taylinn bit and clawed but still they dragged them off and threw them into a metal cage.
“Take them to the Crystal Palace. The Emperor will know what to do.”
The cage began moving. Below the cage, Sinya saw robotic legs moving forward. His stomach flipped flopped as they moved toward the darkness. A Crystal Palace?

3 : The Emperor of Earth