Thirty years passed since Britannia voted to throw off the Roman yoke. Now, the old world crumbles. Pirates roam the seas, bandits threaten the highways, and barbarian refugees from the East arrive on Britannia's shores, uninvited. The rich profit from the chaos, while the poor suffer. A new Dark Age is approaching - but all is not lost. Ash is a Seaborn, a Saxon child found on the beach with nothing but a precious stone at his neck and a memory of a distant war from which his people have fled. … END_OF_DOCUMENT_TOKEN_TO_BE_REPLACED 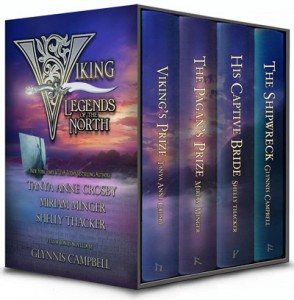 Conquering lands, enslaving hearts... Four fierce Vikings from the frozen north find warmth at the hearth of their enemy. Three full-length bestselling Viking romances and one bonus novella by New York Times and USA Today Bestselling authors Tanya Anne Crosby, Miriam Minger, Shelly Thacker, and Glynnis Campbell. THE SHIPWRECK by Glynnis Campbell With his wife and children dead, Viking marauder Brandr has nothing left to live for, so he sets sail on one last voyage. But when he's … END_OF_DOCUMENT_TOKEN_TO_BE_REPLACED