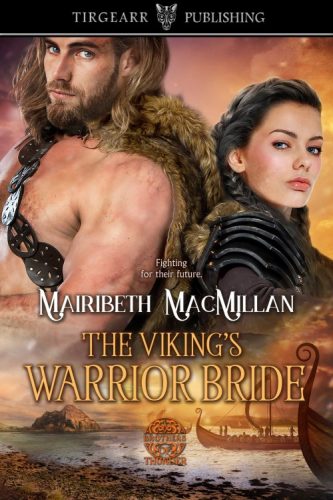 Bjorn and Ylva. Two warriors who fight side by side. Two lovers who avoid commitments. But their convenient relationship just got complicated.

Determined to redeem her father’s name through her own brave deeds as a warrior, Ylva has no desire to give that up to be a mother. On the eve of returning home to the Norselands to find a foster family for her child, she is injured in an attack by a mysterious group of mercenaries. When Bjorn discovers her secret, everything changes. He has never wanted a family, his own father’s betrayal has seen to that, and yet he begins to wonder if there is anything else truly worth fighting for.

After a series of attacks by mercenaries on the fort they have been guarding, they’re asked to disguise themselves as traders and travel up the River Clyde to gather information. As they travel the situation grows stranger with every village they visit and Ylva begins to wonder what she is fighting for. All around them they find missing villagers, a mysterious bard and a population unhappy with their king and his choice of allies. When they visit the supposedly abandoned former royal residence at Alt Clut, a mysterious woman and her son stow away on the trade boat, putting all their lives in danger and prompting them to make a final stand but how much are they willing to sacrifice for their future?