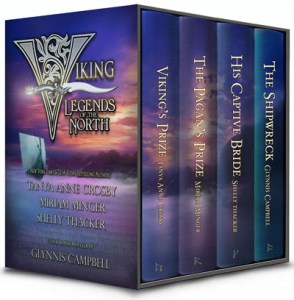 Conquering lands, enslaving hearts… Four fierce Vikings from the frozen north find warmth at the hearth of their enemy.

THE SHIPWRECK by Glynnis Campbell
With his wife and children dead, Viking marauder Brandr has nothing left to live for, so he sets sail on one last voyage. But when he’s shipwrecked on enemy shores, he finds himself at the mercy of Avril, a warrior maid with a half-Viking daughter, who takes him captive. Avril refuses to fall victim to a Northman again…never imagining that soon her fiercest foe will earn her trust, invade her heart, and enthrall her senses.

HIS CAPTIVE BRIDE by Shelly Thacker
Abducted from a trade fair by a mysterious warrior, Lady Avril de Varennes awakens on Asgard Island, an enchanted paradise cloaked in mists and mystery, kept secret from the world for centuries. Against her will, Avril weds her arrogant captor, Hauk Valbrand–even as she vows to escape. Hauk believes himself beyond the reach of love, until his fiery captive bride begins to melt his heart of ice. But soon he must reveal the stunning truth about Asgard and its people–and Hauk and Avril must choose between love and honor, duty and desire… now and forever.

THE PAGAN’S PRIZE by Miriam Minger
Bold Viking warrior Rurik travels alone on a mission of conquest, never counting on the golden-haired captive, who inflames him with longing. Taking up his sword to defend her, Rurik swears to claim her for his own. But betrayed by treachery, Russian Princess Zora spurns the man who holds her prisoner, vowing never to yield. But the fates lead them to a fiery passion–a greater prize than any kingdom.

VIKING’S PRIZE by Tanya Anne Crosby
The conquered becomes the conqueror in Viking’s Prize. Jarl Alarik Tryggvason seeks revenge against the French count who betrayed him, but he never bargains on the dark-haired beauty with haunting violet eyes. Beguiled by Elienor and her fiery spirit, Alarik is captured, body and soul… but in a land full of strife, the powerful jarl risks everything to love the enemy–a woman whose prophetic dreams hold their future in thrall.

What Inspired You to Write Your Book?
With the popularity of the History Channel series “Vikings” come readers eager to immerse themselves in the wild and lusty world of the warriors of the North. But Viking romances haven’t been easy to find, which is why the four of us decided to assemble this special collection of bestselling and beloved romances set in the Dark Ages. And this boxed set is coming at just the right time, as Season 3 kicks off!

How Did You Come up With Your Characters?
For my story in the collection, “The Shipwreck,” I was intrigued by the idea of reversing the roles of the invader and victim. But in order to make that work, Brandr, the broad-shouldered giant of the North who washes up on enemy shores as a castaway, had to have a sense of moral justice and the ability to use reason. And Avril, the beautiful Pictish lass who discovers and captures him, had to have a sturdy backbone and nerves of steel. Then, just for fun, I threw in Kimbery, a sprightly little girl who wreaks havoc and tugs at the heartstrings of the most hardened warrior.

Book Sample
He was staring at her again with his penetrating eyes. She didn’t think she’d ever seen eyes so blue—as blue as a summer sky, nay, a robin’s egg. Rattled, she turned aside to add another log to the fire.

“I think your arm is broken,” she mumbled. Why she’d told him that, she didn’t know. After all, it didn’t matter. She wasn’t about to fix it for him.

“It’s a wonder my head isn’t broken,” he said with a humorless smirk.

She blushed at the reminder of her unchivalrous blow and picked up the poker again, eager to change the subject. “How is it you know my language?”

“I learned it from a Pict slave.”

She clenched her teeth. A slave? She jabbed at the glowing coals, but refused to rise to the bait. Maybe she should turn him into a slave.

As if he’d read her mind, he asked, “What do you intend to do with me?”

She’d been asking herself that same question all morning. For the moment, she’d hold him hostage. If any of his men turned up alive, she might be able to bargain for her safety with his life. But she wasn’t sure there were survivors. Even if there were, there was no telling whether he was of any value to them. The Northmen didn’t seem to have the same regard for life as her people did.

“I haven’t decided yet,” she said.

She frowned. Kill him? In cold blood? Obviously, he knew nothing about chivalry. She straightened with pride, planting the poker between her feet like a blade. “I can’t do that. Unlike you, my sense of honor prevents me from slaying unarmed men.”

He lifted a brow in mockery. “Give me a blade then,” he suggested.

Avril gave him a sardonic smirk. She wasn’t so foolhardy as to think she could easily triumph over a gargantuan Northman. But she didn’t appreciate his insulting attitude. “I may be honorable, but I’m not soft in the head.”

He half-smiled. “You look soft to me.”

Her composure slipped, but only for an instant. “I assure you, you wouldn’t be the first man I sent limping from the field of battle.”

His eyes narrowed suggestively. “And you wouldn’t be the first woman I laid out flat on her back.”

About the Author:
GLYNNIS CAMPBELL is a double RITA finalist and a USA Today bestselling author of swashbuckling “medieval action-adventure romance.” Romantic Times calls her “a fresh, exciting voice who knows how to stir a reader’s blood.”

TANYA ANNE CROSBY is a New York Times bestselling author and a 5-time nominee for a Romantic Times Career Achievement Award. She is best known for stories charged with emotion and humor and filled with flawed characters.

MIRIAM MINGER is the winner of several Romantic Times Reviewer’s Choice Awards–including Best Medieval Historical Romance of the Year for The Pagan’s Prize–and a two-time RITA Award Finalist for A Hint of Rapture and Captive Rose.