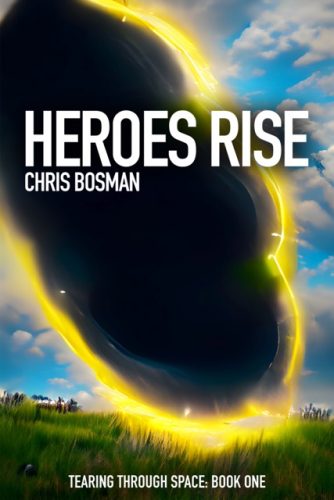 The year is 2211. In the aftermath of a brutal war that brought the Solar System to its knees, Chris Thomson and his friends are just trying to survive in the run-down, nameless town they call home. But their routine is interrupted when Chris makes an exciting discovery that changes everything - a mysterious rock that lets them travel instantly through space. The four young adults are soon thrust into an unfolding plot with sinister implications: another war is brewing. One that could be even … END_OF_DOCUMENT_TOKEN_TO_BE_REPLACED

About Riley Tune: A native of Virginia, Riley Tune originally wanted to be an actor. His decision to be an actor would eventually lead him to wanting to learn how to read a script. Shortly after, he had the idea to try and write a screenplay of his own. That single idea, was the spark that would ignite the fire inside him that fueled him to be a writer. In the years that followed he wrote various screenplays, short stories, and novels before publishing his Warper series. He has told many … END_OF_DOCUMENT_TOKEN_TO_BE_REPLACED

Was it possible that Farrah Conway lived to be 21 years old without knowing him? He was her soul mate—her twin brother. Everything she doubted about herself was brought to light the night she met Jamie. He was her other half and, as an orphan, until they met, she had never known what she truly was. With him by her side, they had the ability to manipulate any and all objects. They could transport not only themselves from place to place with the blink of an eye but they could kill the human … END_OF_DOCUMENT_TOKEN_TO_BE_REPLACED