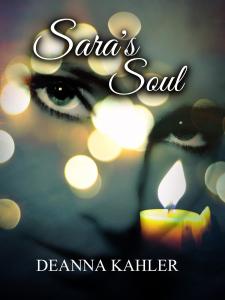 Sara sees death. Everywhere. It haunts her in her sleep. It appears as visions. And now death beckons her to join it.

Psychic since childhood, Sara is convinced she’s living a curse. Instead of foreseeing uplifting life events, she’s haunted by images of other people’s demise. Her mother, who has been long deceased, once told her she could communicate with spirits and that a beautiful paradise awaited those who passed. But Sara never saw that. Now an adult, she’s certain that death is the end, and the overwhelming pain and sorrow she feels has convinced it’s her time to end her own life. The only problem: life keeps getting in the way.

A mysterious stranger appears just when she needs him the most. And no matter how hard she tries to escape this world, he won’t let her go. What starts as a magnetic attraction becomes a race against time, as he fights to save not only her life but her very soul.

What Inspired You to Write Your Book?
I became fascinated with the paranormal and the afterlife after having a few of my own experiences. I published my first paranormal romance novel, “Echoes of Paradise,” in 2014. After great interest from readers, I wrote “Sara’s Soul.” Both books focus on the afterlife and the power of love.

How Did You Come up With Your Characters?
The main character, Sara, represents anyone who has struggled with life and has given up hope. Through Sara, I wanted to illustrate the dark, sad parts of life and how they can affect a person. The other character, Chip, represents that ray of hope and encouragement we all look for at our lowest points. Sara and Chip’s encounters show the full scope of the human experience and also reinforce the ability love has to transform everything.

Book Sample
Sara clutched the bottle of pills in her left hand, tears streaming down her face. The pain, the sadness, the despair—they were all too much for her. She had reached her breaking point. She knew that better days had once existed, but they seemed so far away now. All she could see were the many haunting images of suffering and death that plagued her mind like a disease. Death had always followed Sara since she was a child. She tried to escape it, but it gripped her tight. No matter how hard she fought, she could not free herself from its iron-tight clutches. Death was all there was for her. And what better way to beat death than to join it? Then she would finally be free.

Five years had passed since that horrid day, the day her mother had died, when Sara was just fifteen years old. To her, it felt like yesterday. Sara could still see her kind smile and smell her lilac perfume. She remembered the way her mother’s crimson hair lit up like a wildfire in the sunlight. And Sara would never forget that magical sparkle in her mother’s blue eyes whenever she would talk about spirits and “the other side.” But most of all, Sara remembered her love. The kind of love that can only be shared by a mother and a daughter. Star was Sara’s whole world. And then, in an instant, she was gone. Cancer had claimed her body, and for years Sara had hoped it hadn’t claimed her soul, too.