You are here: Home / Faith and Religion / Christian Fiction / Rise of the Unmarked: Spiritual Revolution Book 1 by J. Michael Krivyanski 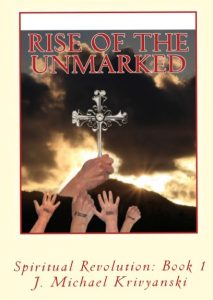 In the world’s future, there is one governing body. All individuals are given a mark on their right hand at birth so the government can monitor them. They are told to only trust technology and what it tells them.

People are not taught they have a soul. They are unaware of the intense spiritual warfare occurring around them. The effort to collect human souls is a well-guarded state secret. People are encouraged to only worship a single religion. The worship of any other religion requires official permission.

Christians and Jews fight against this terrifying evil. They have been called upon to save humanity or be responsible for its destruction.

How Did You Come up With Your Characters?
I saw the characters, as I saw the story. I could see them interact in my mind. There were elements of people I've known in the past in many of the characters. Most of them are just based on my ideas.

Buy Rise of the Unmarked: Spiritual Revolution Book 1 On Amazon