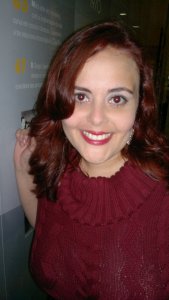 About Vivian Wolkoff:
Vivian Wolkoff has always been in love with words – even before she could read them. So, it should be no surprise she turned to writing and reading very early in life. She first self-published a poetry book at the age of 13, followed by two honorary mentions in contests promoted by a small publishing house in her native Rio de Janeiro, Brazil. Then, she decided to do some living and find out what else she loved. After college and moving cross-continent twice, Vivian decided to turn to self-publishing again. She is the author of Showmance, the first book in a trilogy about a fake celebrity couple and their crazy fans, and, now, Love You To Death.

What inspires you to write?
When I was a little girl, I loved making up stories. My family has some great storytellers and I wanted to be like them. I don’t remember when I started telling stories. I just remember I started doing it, too. My dolls were always living adventures in distants corners of the world or were CEOs knee-deep in intrigue or they were saving worlds using magic or piloting spaceships. I used to tell myself stories all the time – and I’m still telling them.

Tell us about your writing process.
When it comes to building the narrative, I’m a tweener. I plot heavily, but I’ll take detours… I’ll see where the characters takes me. I have a general idea of who the characters before I start writing, but it’s through the first draft that I really get to know them. It’s like meeting real people. It takes us a little while to really know another person. By the end of the first draft I really know my characters. Then, I just go back and make the plot fit them. Usually, I don’t have to tweak with the plot too much, just minor details.

For Fiction Writers: Do you listen (or talk to) to your characters?
I was never the type of writer who had people trying to burst out of my mind. I have friends who are like that. Sometimes, they have a story nicely plotted and the character just refuses to follow the plan. I don’t have that. I have something else. I met this artist a few years back who did these amazing sculptures from solid blocks of wood and he said that when he looked at the block of wood he could see the sculpture in there… he just had to get everything else out of the way. I know other artists have said similar things about their process over the years.
That’s how I feel about my characters. I feel like they are already there, in the story world, I just need to remove all the clutter and reveal them to the world.

What advice would you give other writers?
I’ll repeat something my college professor used to say: people are giving you something precious in exchange for your story. They’re giving you money and, more importantly, time. So, make it worth their while. Tell them a good story – and tell it well.
Once you have that, everything else falls into place.

How did you decide how to publish your books?
I decided to self-publish after an agent told me she loved my novel, Love You to Death, but couldn’t see a way to sell it. I kept reading about authors who had heard similar things from agents and editors and I just couldn’t believe that was possible. Then, it happened to me. And I decided to follow in the footsteps of those writers, and sell my work myself. Going indie is incredibly empowering. Sure the risks are all yours and you have to do all the work (or find the people to do it for you), but you’re in charge of your career. You’re not dependent on external approval. It’s very liberating.

What do you think about the future of book publishing?
I think publishing is finally following in the footsteps of the movie and music industries.
I think it’s about time the legacy publishers stop fearing indie publishing. They should take a leaf out of the film industry’s book. Indie filmmaking is an environment where you see different approaches to storytelling; where you see artists taking risks the establishment can’t take because it needs a profit, it needs to play safe. Indies feed the establishment with new talent and new ways to tell stories. Indie publishing is, in fact, already breathing life into mainstream publishing. Hugh Howey and Amanda Hockings are perfect examples of that.

What genres do you write?: Fantasy, Sci-Fi, Psychological Thriller