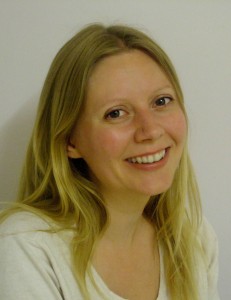 About Rosie Blythe:
Rosie Blythe lives in London (hence all those crazy British spellings) and when she’s not writing, works as a stylist in television and film. She is the author of The Princess Guide to Life series, self-help aimed at smart, sassy women (and fabulous men).

What inspires you to write?
I’ve always enjoyed self-help books – everything from dating manuals to spiritual advice – and I wanted to write something that was genuinely helpful but also fun and light-hearted. I was tired of reading the kind of faux-empowerment you get in women’s magazines where they tell you to be confident, and then on the next page they have tips for hiding your thighs! I wanted to encourage my readers to have fun with their lives, be bold enough to set boundaries in their relationships with other people, and to be aware of the positive impact they can make on the world around them. The best compliment I’ve had was when a reader said that my book was her “comfort-read” and it made her feel ready to take on the world – that’s exactly what I set out to achieve.

Tell us about your writing process.
When I have an idea, I’ll let it marinate in my head for a while before starting to scribble down a basic outline. My first draft will generally be a mass of notes, which I’ll then slowly form into coherent sentences!

I’m a big believer in leaving a book for as long as possible in between drafts; I work on something else or give myself a break. That way I’ll come back to it feeling refreshed and able to read it objectively, almost as if it had been written by somebody else. It took me two years to complete The Princess Guide to Life, but only about six months of that was actual writing. The book went through twelve drafts, and after each edit I would let it rest for as long as I could stand before I was itching to get back to it.

During the editing process, my key words are simplicity and clarity. If there’s the slightest chance of misinterpretation I’ll re-write the sentence until the meaning is clear, and if I find a paragraph of waffle I’ll have a stern word with myself: “What EXACTLY are you trying to say here?” My trick for the final edit was to imagine I was a really snarky reviewer, trying to find anything I could tear to pieces and ridicule.

For Fiction Writers: Do you listen (or talk to) to your characters?

What advice would you give other writers?
I always find it comforting to remember that the first draft of anything is crap! The most important thing is making a start; you can worry about refining it later. Like they say, you can’t edit a blank page. And keep all your drafts; that way if you don’t like the way revision number three has turned out, you can always go back to an earlier version.

I think the two most important things for cultivating your skill as a writer are reading and writing as much as you can. By writing a lot, you’ll be developing your voice and learning what methods and routines work for you. But I think it’s almost MORE important to read a lot, because learning from the masters is how most of us improve.

And finally, don’t worry if every part of the writing process takes twice as long as you expect it to.

How did you decide how to publish your books?
I did a lot of research into the industry, and for me, it was a no-brainer to form a publishing company of my own (Hallsworth Press Ltd). I wanted total creative control; I hated the idea of handing over the reins to someone else and letting them make decisions about the editing, cover design, and blurb. Marketing may be a lot of work, but I’d rather get stuck in than sit around twiddling my thumbs while I wait for someone else to tell me how it’s going.

Having said that, running a small business has been a learning curve and I can understand why people prefer to let someone else take care of the admin while they get on with writing the next book. I think the secret is to have realistic expectations about what traditional publishing can do for you, rather than getting swept up in the idea that signing with an agent is your golden ticket to success.

What do you think about the future of book publishing?
Amazon was a real game changer when they allowed people to upload their books and start selling; the fact that companies like Createspace and Ingram Spark have made it possible to print single paperbacks on demand is just amazing.

Judging by my local bookshop, traditional publishers are mostly releasing books by authors who already have a great track record, celebrity chefs, and people who have millions of fans on Youtube. Occasionally they’ll choose an unknown to launch into the stratosphere as “the next big thing”, but I think independent publishing allows the cream to rise to the top in a more organic way, with word of mouth building up sales over time. The big 6 are unlikely to take a chance on some avant-garde first-time novelist while they’re still pumping out money-spinning variations on The Hunger Games, so as a reader, I’m thrilled that authors are no longer dependent on gatekeepers allowing them to unleash their stories on the world.