You are here: Home / Interviews With Authors / Interview with Author – Kathryn Meyer Griffith 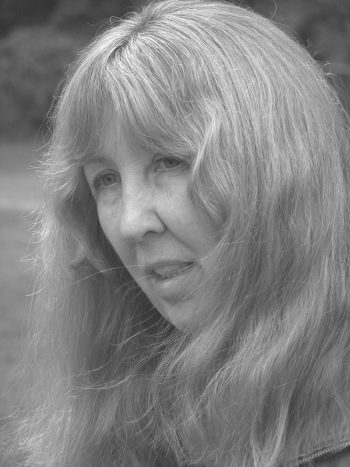 About Kathryn Meyer Griffith…
Since childhood I’ve been an artist and worked as a graphic designer in the corporate world and for newspapers for twenty-three years before I quit to write full time. But I’d already begun writing novels at 21, over forty-eight years ago now, and have had twenty-nine (nine romantic horror, two horror novels, two romantic SF horror, one romantic suspense, one romantic time travel, one historical romance, five thrillers, one non-fiction short story collection, and eight murder mysteries) previous novels and twelve short stories published from various traditional publishers since 1984. But, I’ve gone into self-publishing in a big way since 2012; and upon getting all my previous books’ full rights back for the first time in 36 years, have self-published all of them. My five Dinosaur Lake novels and Spookie Town Murder Mysteries (Scraps of Paper, All Things Slip Away, Ghosts Beneath Us, Witches Among Us, What Lies Beneath the Graves, All Those Who Came Before, and When the Fireflies Returned-which will be out in December 2020) are my best-sellers.
I’ve been married to Russell for forty-two years; have a son, two grandchildren and a great-granddaughter and I live in a small quaint town in Illinois. We have a quirky cat, Sasha, and the three of us live happily in an old house in the heart of town. Though I’ve been an artist, and a folk/classic rock singer in my youth with my late brother Jim, writing has always been my greatest passion, my butterfly stage, and I’ll probably write stories until the day I die…or until my memory goes.
2012 EPIC EBOOK AWARDS *Finalist* for her horror novel The Last Vampire ~ 2014 EPIC EBOOK AWARDS * Finalist * for her thriller novel Dinosaur Lake.
Novels and short stories from Kathryn Meyer Griffith:
Evil Stalks the Night, The Heart of the Rose, Blood Forged, Vampire Blood, The Last Vampire (2012 EPIC EBOOK AWARDS*Finalist* in their Horror category), Witches, Witches II: Apocalypse, Witches plus Witches II: Apocalypse, The Nameless One erotic horror short story, The Calling, Scraps of Paper (The First Spookie Town Murder Mystery), All Things Slip Away (The Second Spookie Town Murder Mystery), Ghosts Beneath Us (The Third Spookie Town Murder Mystery), Witches Among Us (The Fourth Spookie Town Murder Mystery), What Lies Beneath the Graves (The Fifth Spookie Town Murder Mystery), All Those Who Came Before (The Sixth Spookie Town Murder Mystery), When the Fireflies Returned (The Seventh Spookie Town Murder Mystery, which will be out in December 2020), Egyptian Heart, Winter’s Journey, The Ice Bridge, Don’t Look Back, Agnes, A Time of Demons and Angels, The Woman in Crimson, Human No Longer, Six Spooky Short Stories Collection, Forever and Always Romantic Novella, Night Carnival Short Story, Dinosaur Lake (2014 EPIC EBOOK AWARDS*Finalist* in their Thriller/Adventure category), Dinosaur Lake II: Dinosaurs Arising, Dinosaur Lake III: Infestation and Dinosaur Lake IV: Dinosaur Wars, Dinosaur Lake V: Survivors, Memories of My Childhood and Christmas Magic 1959.

What inspires you to write?
I've been writing for over 49 years now and have had 30 novels and 13 short stories published since 1984. I write because I cannot NOT write. I was born a storyteller.

What authors do you read when you aren’t writing?
Since I started out as a horror writer…Stephen King, Dean Koontz, Michael Crichton, Ray Bradbury, Edgar Allen Poe, Anne Rice.

Tell us about your writing process.
I get an idea, a concept or even a character and then form the story around them.
I've always been a seat of the pants writer…I tried early on to outline but always quickly went off of it. The characters told me who they are and what they are going to do. I write on a laptop; but began my writing career in 1971 on an electric typewriter. I like computers much better.

For Fiction Writers: Do you listen (or talk to) to your characters?
Sure, I talk to them and they talk to me all the time. When I start a book or short story it's as if I am living the story and it's as real as my own life for as long as I am writing it. If I see or read the book years later it's as if it's a child of mine that has grown up…I sometimes barely know it anymore.

What advice would you give other writers?
If you are called to write, and I believe it is a calling, you write, write, write. You write for yourself, not for wealth and fame. You write because you can't not write. Also, don't ever give up; and keep learning your craft always, grammar, spelling, and characterizations.

How did you decide how to publish your books?
I started out in 1971 chasing the legacy publishers and my first 15 novels were with traditional publishers. Since 2012 I strictly self-publish -I'm a proud Indie!- after having learned how to format eBooks, paperbacks and work with cover artists, and narrators for my audio books; I learned how to submit these different formats to the Internet. I do it all (though as I said I have a great cover artist).

What do you think about the future of book publishing?
It's an open universe. I LOVE that I can now self-publish. I LOVE that there are eBooks, paperbacks, and audio book opportunities. I think there is a place for printed books, traditional publishers and self-publishers. "The future is wide open." People will always love and need novels and short stories…and what would the television programs and movies do without the novels they base their stories on? We creative writers are here to stay!

Your Social Media Links
Goodreads
Facebook
Twitter
Pinterest
LinkedIn
All information in this post is presented “as is” supplied by the author. We don’t edit to allow you the reader to hear the author in their own voice.