You are here: Home / Fiction / In a Latitude of Temperance by Ichabod Temperance 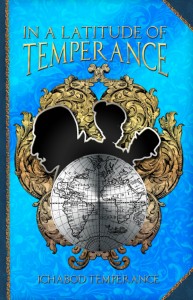 “Gee, whiz, Miss Plumtartt, these here are sure enough an odd assortment of characters you and I have run up with.”
“Indeed, Mr. Temperance, and at the risk of disclosing any ‘spoilers’ for our dear readers, I suspect that we have allowed ourselves to fall into the clutches of a Nosferatu brood.”
“Nosfer-who-who?”
“Nosferatu, Mr. Temperance, undead fiends that gain sustenance be slaking their unnatural thirsts on the manna of the living.”
“Oh my Goodness! You mean we are prisoners of a bunch of bloodsucking Vampyres? That’s terrible!”
“Quite, but what is even more troubling is my suspicion that they are brewing a conspiracy that could threaten life at every level all over planet Earth!”

What Inspired You to Write Your Book?
I wanted to write a whimsical Vampyre story and pay humorous homage to my favourite Vampyres and Vampyre slayers. As it turns out, it is an opportunity to be friends with many of these charming personalities.

How Did You Come up With Your Characters?
I chose a few of my favourite Vampyres from film and television to be my cast. I am sure that there are many delightful blood-suckers that I neglect to include, therefore I apologize to any Vampyres, or Vampyre slayers that feel slighted at being left out.

Buy In a Latitude of Temperance On Amazon