You are here: Home / Fiction / For the Love of Temperance by Ichabod Temperance 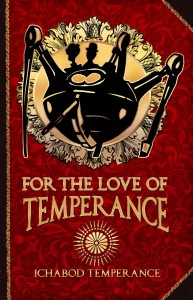 “Golly, Miss Plumtartt, the Earth is getting pummeled with meteorites!”
“I say, if only these projectiles were organically based, Mr. Temperance, I would not be of such a troubled mind, but I fear that the flaming flotsam are revealing themselves to be warcraft from the planet Mars. Their weapons are uncanny and easily defeat the greatest of Terras resources. These invaders wish to strip our beloved planet of her native sovereignty!”
“Holy Red Planet Invaders, Miss Plumtartt, you’re right! I reckon it’s gonna be up to you, me, and this charming cast of characters to save the Earth in this War betwixt the Worlds.”

What Inspired You to Write Your Book?
This book is a humorous homage to H.G. Wells, science fiction classic, ‘The War of the Worlds’. I have always enjoyed this story and all of its re-tellings; including Orson Wells notorious radio show. Normally, ‘War of the Worlds’ is a grim tale, but this version contains a whimsical, steampunk element.

How Did You Come up With Your Characters?
Participating in an on-line acting project, I virtually met some wonderful actors and actresses. I incorporate fanciful recreations of these charming people in this adventure.

Buy For the Love of Temperance On Amazon