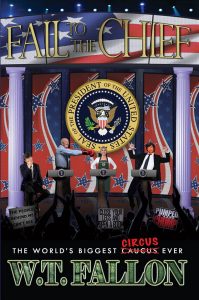 But it doesn’t take long for the contestants to start digging up dirt of their own and throwing it back at him–literally, in the case of billionaire candidate Ronald Chump when he’s challenged to dig his own moat along the Mexican border. To make matters worse, Bryan’s producer pressures him to be nicer to the candidates, and his former crush, now an experienced political correspondent, shows up–and shows him up at every turn.

When a cheating scandal rocks the show, Bryan suspects it’s just the tip of a very underhanded iceberg. Will exposing the plot to wreck the most hysterical–er, historic–election of all time cost him everything? Or lead to an even bigger reward he never anticipated.

What Inspired You to Write Your Book?
When I came up with the idea for my novel, Fail to the Chief, I was running on the treadmill, and the TV was on a 24-hour news channel. I realized election coverage is a lot like a reality show—candidates are followed 24/7, commentators yell questions at them, pundits "judge" everything they do, and just when you think you know who's going to win, someone throws a wrench into things and everything changes.

So if it's pretty much just like a reality show anyway, why not let people vote from their couches, like we do for other reality shows? I read years ago that more people voted for American Idol than voted for president in the last election. Wouldn't voter turnout be better if people didn't have to drive to the polls and stand in line?

What would this reality show look like? I immediately pictured the shows I watched, but with candidates for contestants. There's the usual reality show host, the likable guy in a tuxedo introducing the contestants, giving them a shoulder to cry their totally fake tears on, and trying to ask tough questions without appearing too opinionated.
Then there were the contestants. This was in December of 2015, so there were about a dozen real candidates on both sides of the aisle for inspiration. I imagined various characters competing on this reality show to find a president. What could happen on a reality show that couldn't happen in real life? What would we learn about the candidates if we really followed them around with cameras 24/7?

I started thinking about all the things I'd always wanted to see in a debate. You know those drinking games they have for presidential debates? Take a shot when so-and-so lies, take a shot when so-and-so says such-and-such trite phrase? What if it was the candidates who had to drink every time someone lied or said something eyeroll-inducing. How much more fun would that be? How much more honest would they be?
Speaking of honesty, what if we had a debate where all the candidates were hooked to a polygraph, with real-time reporting on whether they were being truthful or not? Who hasn't wanted to watch that in a debate?

How Did You Come up With Your Characters?
My book is fiction, and I have an extensive imagination (ask anyone who's ever read my resume). So obviously my characters are not based on any real people who have ever run for president. I did try to use characteristics often associated with politicians—self-importance, being out of touch with reality, blathering on about their accomplishments.
Let's see, there's a billionaire named Ronald Chump running for prez in my book. But unlike any real presidential candidates, he only threw his hat in the ring after being told he couldn't direct-purchase the White House…and suing because he claimed to have paid more in taxes than said establishment was worth. There's a congressman who goes on and on about America's declining morals, but winds up in a sex scandal himself. There's the congresswoman who promises to tax the rich and help the poor, but mostly helps big corporations and rich individuals save money on taxes. There's the clueless third-party candidate who doesn't know anything and proposes legalizing pot as a solution to every problem.

He breathed a sigh of relief as Shanda shrieked “Clear!” and the monitor rolled a lengthy package introducing the candidates. As pre-recorded bullshit flooded the screen, he looked at the actual people, glad-handing and beaming false smiles at each other. Senators, congresspeople, governors, people who were just rich and bored—all about to get a big surprise.
The package ended and Shanda shouted “Cue!” in his ear, just seconds after he remembered to turn down the volume on his mic pack. He got up, walked around the desk, and marched straight into the crowd of candidates. They all shut up and stepped aside, faux smiles tattooed on their faces.
“Thank you all for agreeing to participate in this historic occasion.” He gestured to the rows of red-and-white striped couches to either side of the group. “Please have a seat, and I’ll explain your first challenge.”
The presidential hopefuls looked first at the couches, then each other. Leave it to the leaders of our country to waste an hour analyzing who sits where and who’s next to who and what will NASCAR dads think if I sit next to a member of the other party?
“Sit directly behind where you’re standing,” Bryan said. “We need to move quickly, as you have limited time for your first assignment. You’ll see why in a moment.”
Reluctantly, the candidates sat, stiff as statues. Bryan turned and walked back toward the desk, stopping at the end of the couches. He was directly between Phil Willard, a Californian who had been in Congress longer than Bryan had been on Twitter, and Sara Finnegan, a former tech CEO who claimed her business expertise would help fix the country’s economic problems.
“Now, as you all know, the By the People, For the People Act says that all challenges must be selected by the voters. So in the previous weeks, we opened up our Facebook page to suggestions, and compiled a list of the ones with the most likes. Then we distributed the list to all of you” —he swept a hand backward, toward the candidates— “and asked which challenges you’d most like to participate in. We will be using the twenty challenges that were least popular among your group.”

“What?” Willard sputtered, slapping the knees of his jeans, which he wore every day with a suit jacket and tie, to show the people of his state he was just like them. Just richer and more powerful.
“Why did you ask our opinions?” demanded Martin Morganstern, a former Wall Street banker and current senator from New York who, like Finnegan, claimed he could fix the economy if elected.
“We asked which assignments you wanted to see which ones you hoped to avoid,” Bryan explained. “Obviously those are the ones that stand the best chance of making you look less like your carefully-crafted images and more like yourselves. By doing those challenges, we believe we’ll get a more accurate representation of what you’re all really like.
“Now, let’s get started. This first challenge was number three on the list of top twenty competitions you didn’t want to do.” Bryan walked over to the desk and picked up a six-inch binder. “Your assignment will be to balance the Congressional budget. Those of you who have served in Congress may be familiar with this process, but you’ll be doing things a little differently today. You will not have the option of shutting down the government if you can’t agree. You will arrive at a balanced budget within the next twelve hours, or you will all be disqualified.”
“Outrageous!” Milton Buckshaw was the morbidly obese, booming-voiced governor of Texas, known more for his bluster than his accomplishments. “You can’t expect us to do in twelve hours what Congress can’t do in two months.”
“And you can’t disqualify all of us.” Sara Finnegan stared daggers at Bryan. “Who’s going to run this country if you disqualify every single candidate running for president?”
Bryan smiled. Out of the corner of his eye, he saw the prompter on the nearest camera blink, a sure sign the network’s automaton, Artie, had updated it with an answer to the question she’d asked. It was a reasonably accurate program, but he didn’t need a script to handle this one. In fact, he’d been waiting for someone to ask.
“That won’t be a problem, Ms. Finnegan. You lot are just the A team. We’ve got a B team ready to go if you all wash out by episode two. There’s also a C team.”
The candidates gawked at him.
“This is exactly why I voted against the By the People, For the People Act,” said Fred Haverty, an Ohio senator who had earned an early advantage in the presidential race by naming every one of his mistresses before the press could dig them up, thus, in his words, proving he was honest. “This country could wind up being run by someone who didn’t even make the first cut.”
“We were all top contenders in our parties before the act passed.” Buckshaw yanked his belt buckle up higher on his massive midsection. “What did you do, ask the cleaning staff at your hotel if they’d like to run for president?”
“Yeah, I’d like to know who’s on this B team,” Willard said.
“All sorts of people who have wanted to be president at least as long as you all have. In some cases, much longer.” Bryan leaned against the carved desk and scratched his head, trying to look deep in thought. ACT NATURAL AND TRY TO SOUND LIKE YOU’RE ADLIBBING, prompted the prompter. “Let’s see, several people from the Green Party, besides the one who made it onto the A team” —he nodded at Bob Fuller, who was only on the show because Shanda thought adding a “no-chancer” would make things more interesting— “a bunch of Libertarians, Kanye West, some guy named Ross Perot who says he’s been running since before my parents were born, guy who goes by the name of Joe the Plumber—”
“This is ridiculous!” Buckshaw hefted his considerable girth off the couch, causing Finnegan and Willard to scramble for higher ground. Rumor had it he was in talks with the network to appear on the next season of Lose the Lard if he didn’t win this show. “You can’t possibly think one of those clowns would make a better president than one of us.”
“It’s not up to me.” Bryan flashed the smile he used to reserve for people who had just been voted off Sing Your Heart Out and weren’t going quietly. “These are the rules the network decided on, all approved by the American people through Facebook polls.”
“Then the American voter is failing to grasp the gravity of this situation,” Haverty said. “Surely the voters didn’t think some guy with a plumbing show would be better equipped to run our country than me.”
“I think the American voter is tired of taking crap from politicians.” He was supposed to sound like he was adlibbing. “The idea is not to elect an inexperienced unknown, but to force all of you to do the job Congress keeps failing to do. So if you think anyone in this room would make a better president than Joe the Plumber—who does not have a TV show by the way—then I suggest you all work together and balance that budget. Because if you don’t, you’re proving that you care more about your own egos than you do about America having a capable leader.”
With that, he walked off the set, leaving the candidates squabbling in the background.