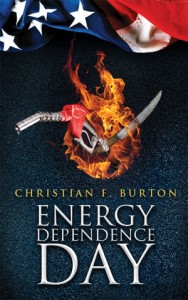 Two countries, different in almost every way, yet bound by the common thread of oil. What would happen if that thread broke? When the turbulent waters of the Arab Spring reach Saudi Arabia-the birthplace of Islam and home to fifteen of the 9/11 terrorists-the United States will need to balance conflicting ideological goals, and learn how to determine when old friends turn into new enemies.

Energy Dependence Day weaves a tale through the political, social, and religious differences of the United States and Saudi Arabia, experienced through the lives of two men, both orphaned as children. One has lived his life in terrorist training camps while the other entered the military and then law enforcement. Each is loyal to the world in which he was saved, moving them on a collision course that will affect the future of the world.

What Inspired You to Write Your Book?
As a parent, you obviously want your children to have safe and prosperous future. However, as I look at the state of our nation, I don’t feel that the members of my generation have been the best stewards. I don’t always feel that my daughters’ futures are necessarily going to be brighter or safer. Our national debt puts future generations at a disadvantage and limits our ability to effectively respond to crises both at home and abroad. While I’m not necessarily a big JFK fan, we are certainly not a nation that asks what we can do for our country.

Radical Islam is a key factor in fomenting violence throughout the world. However, our nation’s inability to reduce energy consumption, diversify our energy mix, and limit dependence on foreign sources, puts a sword in the terrorists hands. Regardless of whether we get our oil from Mexico, Canada, or here at home, unrest in the Middle East still has a huge affect on prices. Yet, instead of doing everything we can to insulate ourselves from Middle East strife, we coddle, cajole, and cozy up to dictators and oppressive monarchs in hopes of maintaining the status quo.

How Did You Come up With Your Characters?
Throughout the novel, my characters often represent opposite sides of the same coin. As the story plays out, I investigate how different characters deal with hardships, challenges, and loss. Do they use their life experiences to excuse their behavior or to shape their character? What choices do they make? It is these choices that define who they are.

Book Sample
Cut off from the parking lot and sandwiched between increasingly angry protesters and the military, Kalila was now officially scared. Finally, she understood why her father thought this was a bad idea. While Kalila tried to collect her thoughts, the other demonstrators’ chants rang down around her. The woman leading the chants screamed, “No one is!”

“Above the law!” the crowd responded.

Suddenly, four riot policemen pulled the woman down from her perch atop the stone bench. She continued to scream, but after the megaphone was wrenched from her hands, she was only mouthing the words. Still, the crowd answered her absent call, “Above the law! Above the law!” Over and over, the crowd chanted. The sound was deafening. Kalila couldn’t even hear herself think. Then, without warning, a great push came from behind. Everyone in the front was slammed against the line of soldiers and riot police.

“Stop!” Kalila yelled, but she couldn’t even hear her own voice. Screams rang out all around her. The line of riot police waved back and forth against the tide of the crowd. In a matter of seconds, Kalila lost sight of Inaya and her parents. Angry men pushed by her and attacked the police line. The force created by the flood of protesters lifted Kalila’s feet off the ground.

“If I fall, I’m dead.” Gritting her teeth she clawed forward hanging on tightly to the shoulders of anyone around her. “I’m not going down. I won’t be trampled to death.”

Suddenly the crowd surged forward, knocking the policemen back. Kalila found herself pinched against the edge of the fountain. With her legs pressed tightly against the concrete fountain, she was certain they would break. With all her might, she threw her shoulder into the person next to her. Momentarily, her legs were free, but the subsequent wave of humanity toppled Kalila into the fountain.

Now, a new fear gripped her, the fear of drowning! As she fell into the water, Kalila somehow grabbed a breath, but getting back to the surface was a struggle. Her habiya, now soaked, felt like it weighed a ton. Her feet slipped on the fountain’s slime-covered bottom as other protesters knocked her over, trying to escape. Every breath was a battle.