You are here: Home / Fiction / Fantasy / Blood and Shadows by Dayne Edmondson 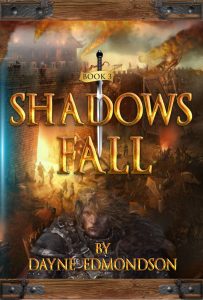 The end is near. The fantastical city of Tar Ebon is under siege. An alien race called the Krai’kesh have laid siege to the city and seek to bring ruin to it and, if Tar Ebon falls, the world.

To combat the Krai’kesh, a band of heroes from Earth are sent to request the aid of the six nations on the Tar Ebon continent. They must face various challenges to bring these nations to their side. But the greatest challenge remains when the final battle against the Krai’kesh goes wrong….

What Inspired You to Write Your Book?
It is the third book in my trilogy and the trilogy had to be ended so that I could then continue in my universe. This book was such a pleasure to write because it has some epic battle sequences and amazing imagery, if I do say so myself.

How Did You Come up With Your Characters?
I originally came up with many of these characters at 15 years old in high school. The characters grew in my mind and I added new characters over the years and condensed others. I designed some characters after friends I had in real life, while others were characters I wished I could adventure with.

Book Sample
Sunlight warmed his face as he stood watching the horror unfolding before him. Dawyn, having been thrown against the wall, was in danger. Bridgette had shifted moments later, and John assumed she was going to help him. The line of soldiers was barely hanging on, while the Krai’kesh leader bellowed unchallenged.
Closing his eyes, he cast out his mind and felt the sunlight. Memories of Alivia explaining sunlight rose to the surface of his memory. Because sunlight acted neither as a wave or a particle exclusively, it was one of the most difficult forms of energy for a mage to manipulate.
John grasped at the sunlight around him, his mind trying to contain the light. It flowed out his mind’s grasp like water flowing from a strainer. Then a thought came to him. Memories of his childhood, when he had used a magnifying glass to burn a small patch of grass in his backyard. Drawing upon all his power, John created a funnel in the air above him. But instead of holding water, it held light. In an instant, the world went dark. No light reached anything – it was pitch black. Nearby soldiers cried out at the lack of light, but John remained calm, his mind rather than his eyes guiding his actions.
John held his sword high and directed the bottom of the funnel toward it. Light flowed down like a lance and struck the blade, sending light cascading across the battlefield once more, like a massive bonfire. At first nothing happened, but then the air began to warm. The blade began the glow first yellow, then orange, then transitioned to white. The speed of its color change surprised John, and he scrambled to mold a shield of energy around the blade, to contain the heat. The blade began to melt in his hands, and he tightened his shield around it, causing the blade, now a flowing mass of plasma in the shape of a sword, to retain its shape.
The transformation of his blade complete, John released the shield of energy and the light returned to the battlefield from above, illuminating in full the scene.
Looking toward the Krai’kesh lines, he focused on their leader. Raising his voice he shouted, “Out of my way,” before charging forward, sword held high in the air so as not to burn allies.
After several meters, he reached the front of the Krai’kesh lines. The first creature he faced raised its claws in a defensive motion. John swung his sword two-handed right toward its claw. Instead of being stopped by the claw, the blade melted through the flesh, instantly cauterizing the wound and causing the claw to drop to the ground. The blade continued on its path and sliced the creature in half. Staring in wonder, John watched as the creature fell to the ground, bisected.
Feeling rejuvenated with energy, as if feeding off the power in his hands, John raced forward. Two more Krai’kesh dropped to his blade as he ran between them and swung left then right. The creatures seeming to learn from the mistakes of their fallen brethren, shied away from John and continued going after the men John had left behind as he rushed forward.
At last he neared the massive creature. It was engaged in a heated battle with a figure that danced around it, disappearing and reappearing in a symphony of shadowy pockets of mist. Bridgette would strike, the creature would turn and try to slam its claw into her, but she would be gone a moment later.
Racing forward, John came behind the creature. “Hey, you big oaf, over here!”
The massive creature, several times larger than any of the other Krai’kesh, turned toward him. John lifted his blade and, rather than charging forward and striking the creature, threw the blade toward it. As the blade moved, he expanded his mind outward and smoothed the air around the blade, making it move as if in a vacuum, for it did not spin. The blade slit into the skull of the creature with ease. It began to roar in agony and thrash about, its brain being fried from the inside. Releasing the energy field from around the blade, John watched as molten plasma dripped out of the wound in the creature’s head and began searing down its body, melting everything it touched. Within moments, what had been a towering behemoth was a puddle of cooling metal mixed with organic material.

Buy Blood and Shadows On Amazon