You are here: Home / Fiction / A Matter of Temperance by Ichabod Temperance 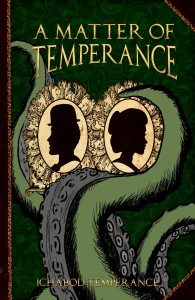 “Hello, is anyone there?”
“This is Ichabod Temperance transmitting from the year 1875.”
“Do you read me?”
“Oh my Goodness, we’ve got trouble, y’all!”
“Ever since that strange comet passed our world, not only have there been more than just an overwhelming amount of steam and spring inventions popping up all over Earth, but there also have been uncanny monster sightings! Well, almost sightings, as these inter-dimensional, over-legged, eyeball-clustered beasties are nearly invisible to the human eye! That is where my own enhanced ability has gotten me into misadventure as I alone have created a device that allows me to see the hippo-sized craw-daddies!”
“Maybe Fate had a hand in my goggle development, for it led to my meeting the most beautiful girl in the world. Now it’s up to me and Miss Plumtartt to save our planet from being gobbled up gone!”

What Inspired You to Write Your Book?
I am closely associated with indie professional wrestling. Some indie fim maker friends invited me to be a stunt man on a sweeping, no-budget steampunk epic. This introduced me to the genre of steampunk. I immediately embraced the notion and joined a facebook-like group, ‘The Steampunk Empire’. Here, it is encouraged to develop a steampunk persona. I wrote this story as a blog entry serial to give background to my character. Afterward, I decided to make it into a novel. Prior to this, I had never written so much as a grocery list, but I think a bug was awakened because now I can’t stop!

How Did You Come up With Your Characters?
I base my characters on myself and my friends. My girl and I are the protagonists, Ichabod Temperance and Persephone Plumtartt. Supporting characters and villains are based on my friends in pro wrestling.

Book Sample
“Note from the bridge, sir.”
“Harumph. Yes. Thank you. What’s this then? ‘Strange glow seen to rear of ship?’ Harumph. Nonsense.”
Mr. Temperance looks at me with eyes the size of tea saucers.
“Get to the back of the boat,” I command sternly. He bows to my request.
There is definitely a green glow from behind the ship. What’s more, I am not the only one able to see it. Everyone can see it.
A horrible sensation runs through me.
I stagger and nearly fall, my loyal companion catching me in support.
Such a concentration of malignant horror I have never felt. An overwhelming wave of fear clutches my heart, my soul, my nerves. I lose control of my composure. I tremble violently and almost start to cry.
I feel like a small child, helpless and afraid.
“Mr. Temperance.” My voice shakes with uncontrollable fear. “Something big is coming for me.”
The decks are alive with excited crew and passengers.
The glow now surrounds the ship. Something is rising from the depths.
“There!” call many people around us, pointing astern.
A great cry goes up from the throngs of passengers that now crowd the decks.
Something has risen from the deepest depths of the Ocean.
Intuitively, I sense this is something ancient, something that should no longer exist in our world.
It is something my own father summoned back into this universe.
Several hundred yards behind the ship, an island has risen. It is smooth, and featureless, until it pulls back its great lids. Unstoppable, a scream rips from my own lungs as the ghastly thing opens its horrible, great eyes!
It looks upon us!
Every set of lungs that has the dubious honor of witnessing those lights fall upon their owner immediately and helplessly begins to scream in panicked terror.
Tentacles of titanic proportions emerge from the water, hover hundreds of feet in the air, and then slam down with devastating force upon the unlucky ship.
Thousands of tiny little humans scream in helpless fright, as squid and octopus arms, on a scale that dwarf even this enormous ocean-going ship, grip our doomed vessel.
What was moments ago one of the greatest achievements of Man, is now a playtoy next to this leviathan.
More tentacles descend upon the ship. They begin to constrict.
The Nipponese on board excitedly say a name: “Gojiro.”
Many of the crew who were struck dumb, now come to a realization.
“The Kra-Ken!”
The name is taken up throughout the ship.
“Kra-ken!”
More tentacles encircle the ship.
Lifeboats are lowered and rope ladders are deployed.
Passengers blindly panic as they desperately search for a way to flee this cursed boat.
Great, monstrous tentacled arms squeeze the life out of this poor ship.
The body of the monster is steadily drawn closer by its many appendages. More of the creature’s form is pulled above the surface of the water until its mouth is revealed. Tentacles actually extend from its gaping maw. It seems the monster means to devour the ship. The bow starts to rise, as the stern is supporting the gross weight of the foul beast.
{{{KER-SNAP!!!}}}
A great tremor runs through the ship! I know immediately that Victoria’s massive steel keel has been broken. There is no saving her. The Victoria’s fate is sealed. This ship is doomed.
As fast as I am able to reach that conclusion, Mr. Temperance has already swept me up in his arms, and pitched me over the rail into a lifeboat on its way down.
“Hold that woman!”
I see his features harden with grim resolve. A resolute visage locks into place and I know that he is about to act in a reckless manner.
Then he stops. The hard face of determination relaxes into the kind features of my little friend.
His face regains its playful sweetness as he casually tosses me his derby hat.
Time seems to slow as he and I are taken in a temporal aberration, a little bubble of serenity and quiet outside of the tumult around us.
A heartstopping foreboding comes over me.
Mr. Temperance and I are in our own world, outside the panicked maelstrom around us.
Blushing, in his shy manner, he smiles.
“I love you, Persephone.”
Then he’s off!
The time bubble pops and the moment is broken, returning me to the uproar of Victoria’s tragedy. Hundreds of panicked humanity press for escape, yet all I see is that foolhardy man. Mr. Temperance struggles past passengers fighting one another trying to go in the opposite direction.
Now he is free of the maddened crowd and the clear decks allow him to pick up speed. Instincts bordering on premonition, give him the ability to dodge tentacles the size of subway cars. The deck of the Victoria tilts towards the stern. The downhill slope increases his mad velocity.
Dodging tentacled obstacles, he runs directly to the monster. Never slowing his stride, he jumps to the stern railing, and leaps, propelling himself out and high into open space.
Once again, time slows as my precious Ichabod has launched himself in a trajectory directly above the monster.
He arcs high, hangs in suspension for a moment, then he drops, disappearing from view forever.

Buy A Matter of Temperance On Amazon