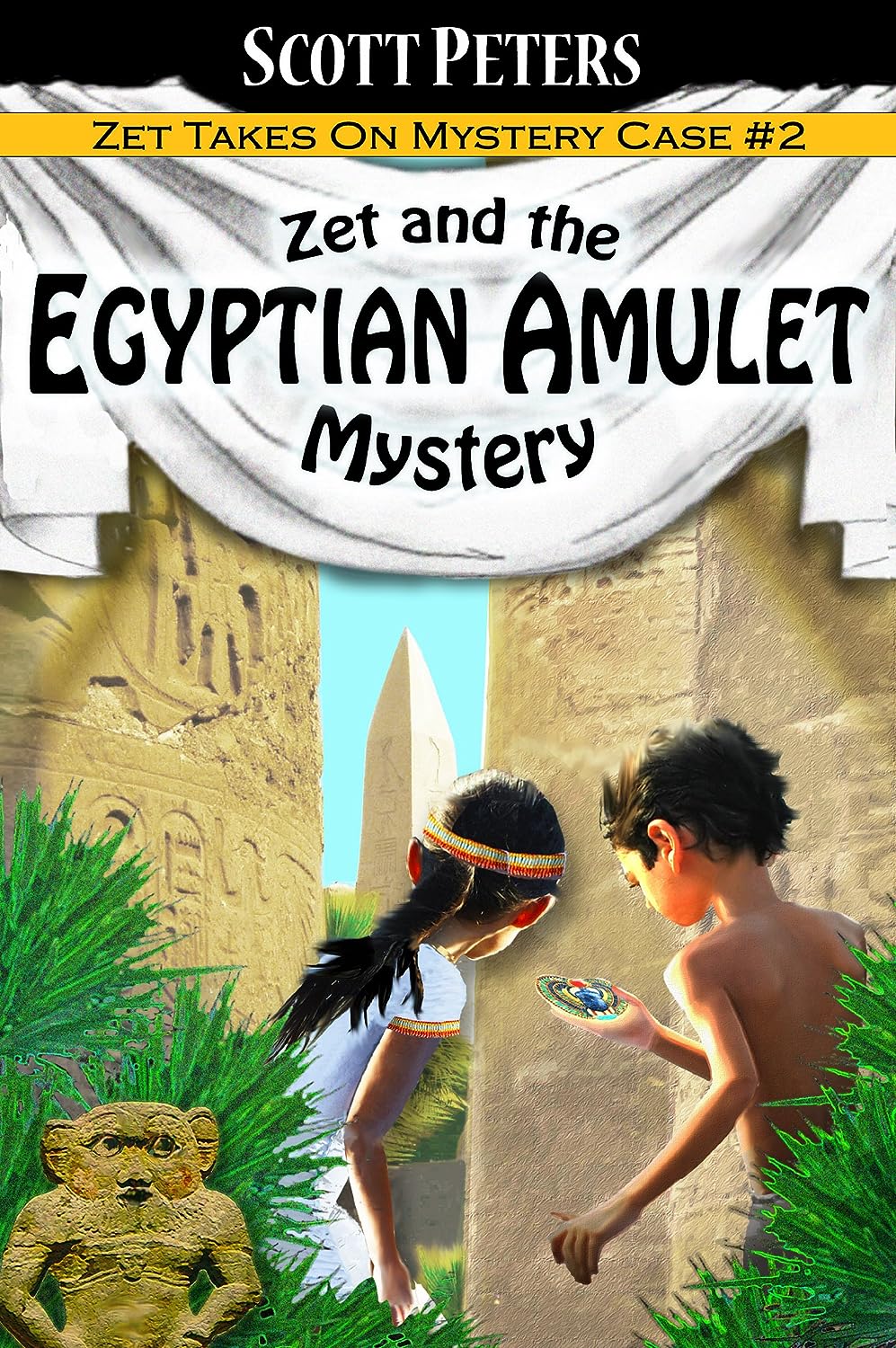 Zet and Kat are back.

When the Nile town of Thebes is threatened by a scarab-amulet eating ghost, Zet is determined to uncover the truth. Is the ghost real?
Meanwhile Zet’s best friend, a jeweler’s apprentice, is in trouble. Could the ghost and his best friend’s ominous master be connected somehow?
As if he didn’t have enough trouble to deal with, special orders have gone missing at Zet’s family pottery stall. With angry customers on his hands, his family reputation is going downhill fast. Soon the investigation becomes a race against time. Zet and Kat must solve the ever-twisting puzzle before it destroys the people they love.

What Inspired You to Write Your Book?
Q: Why do you think people love ancient Egypt?
A: Most readers will agree–something magical happens the first time you hear about ancient Egypt. Maybe you see a mummy movie or visit a museum. Or, like me, a teacher hands you a mysterious worksheet at school. At that moment of discovery, a jolt grips you with intense curiosity.

Q: Fascination draws you in?
A: Exactly. Who were these people? What did their strange symbols mean? How did they create such intense history and what were their daily lives like? You wonder what it would be like to walk the streets of ancient Egypt and see what they saw.

Q: What defining moment made you write about ancient Egypt?
A: On a school field trip to a museum, I saw a mummy in a glass case. The mummy’s fingers were poking through the wrappings. When I got over how wonderfully creepy it looked, something happened. It dawned on me that those fingers, that hand, once did normal human things; tucked a child in at night, held another person’s hand, brushed hair out of eyes on windy days. All thousands of years ago. Somehow, the emotion of the person was still there in that mummy. He wasn’t just an artifact. He was a person with stories to tell. I decided then and there I wanted to give life to the ancient past in a way that was fun and approachable.

Q: What message do you have for your readers?
A: I know many of you are Egypt obsessed like me. Thanks for letting me share my love of ancient Egypt with you.

How Did You Come up With Your Characters?
I grew up with two great siblings, and in a neighborhood with half a dozen kids our age. We loved to imagine that we were on adventures in far off lands. When I sat down to write this series, memories of those great times came back to me, and I’m certain their influence and personalities rubbed off on my characters. I hope you care for them as much as I do.

Twelve-year-old Zet stood outside a tall, narrow gate in the artisan quarter of Thebes. Time had blackened the metal with soot and age. It had taken human hands, however, to sharpen the tops of the bars into knife-like blades. Zet studied them a moment.
They’d be hard to climb over without getting ripped up pretty bad.

All around him, late afternoon shadows crouched low and dark. The dank smell of a leather tannery drifted from somewhere nearby, tugging at his stomach. It smelled like old urine. He tried breathing through his mouth. It didn’t help.
“Hello!” he shouted through the gate.

He rattled the handle. Locked.

It was hard to imagine his best friend Hui locked up in this creepy place. Locked up probably wasn’t the right word, since Hui was there as a jeweler’s apprentice. Still, it seemed like a jail, with its big, ugly unmarked entry.

Zet had been angry the whole way through town. You’d think Hui could’ve answered at least one of his letters in six months. Sure, Hui was probably busy. But that busy? Who forgets their best friend just because they land an important position at the Kemet Workshop?

He gave the bars a hard shake. It was still working hours. Where were these people? “Anyone home?”

A big man lumbered into view on the far side of the gate. His shoulders almost filled the narrow entrance as he approached. He was stripped to the waist, and sweat stood out on his barrel-shaped chest.

“Get away from here,” he said.

“I’m looking for a friend. He’s an apprentice here.”

“Apprentices don’t get visitors. So beat it.”

When Zet didn’t move, the man cracked his meaty fingers. He took a key that hung from a loop on his leather belt and unlocked the gate. Zet stepped back a foot or two, but the man grabbed his arm and twisted Zet into a headlock.

“Makes a funny noise,” the man said. “When your neck breaks. Crunch-like.”

The man spun him lose with a laugh, and Zet slammed face first into the dirt. Zet got to his feet, furious but trying not to show it. What would be the point? It was obvious the man would win any fight.

The man grinned, showing a set of jagged teeth. “We don’t like snoops.”

“I wasn’t snooping. Just tell my friend Hui I was looking for him.”

Immediately, Zet wished he hadn’t said it. What if he got Hui in trouble?

Snaggletooth went inside and slammed the gate shut and locked it. “Hui,” he repeated with a nod. “I’ll tell him.”

The thug walked away, knuckles cracking as he ground them into his fist. Zet swallowed and watched him go.

Something strange was going on behind that gate. Maybe there was a reason Hui hadn’t answered. Zet wanted to climb over the knife-like bars, sneak past the guard and find him. But the workshop was probably a maze of rooms and corridors.

And who knew how many other Snaggletooth-like men lurked back there?

Running a hand over his short-cropped hair, he let out a frustrated breath. It took all his determination to turn his back on that gate, on Hui, and head for home.

About the Author:
Scott Peters writes ancient Egypt adventure stories. Peters has always had a fascination for all things ancient Egyptian. In addition to writing, Peters has created over 300 museum, science center and theme park installations for such places as the Smithsonian, the Washington Children’s Museum, Walt Disney World and Paramount Pictures. Peters also helped design an interactive TV show for the Nickelodeon Channel.