You are here: Home / Children and Young Adult Books / Wizards’ Secret Service. Classified: The Brotherhood of Darkness by George A. Kos 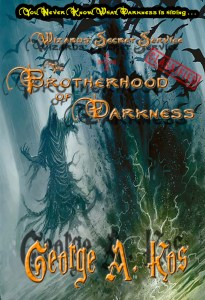 An ancient evil revealed itself in our world. Radimus Dorret – head of Wizards’ Secret Service in New York – has to disclose the classified information about two young wizards, Henry Jones and Billy Dixon, who found out about the existence of an ancient Brotherhood, which everyone considered disappeared.
Henry Jones – a famous young Detective of the magic world – finds a strange message on a crime scene in Paris, but after his return to his hometown Larack, Henry learns about another murder. Now Henry Jones realizes that these crimes are not simply related to each other, but conceal some secret. The investigation takes Henry Jones and Billy Dixon into the depth of the secret life of human and magic worlds, where they find out about the greatest secret of all times. Can Henry Jones confront an ancient organization? Why Henry and his friend are so important for Wizards’ Secret Service?

What Inspired You to Write Your Book?
My love and interest in secret organizations and detective stories.

How Did You Come up With Your Characters?
There are many stories about young Detectives, but so few about those who are also Wizards.

About the Author:
After graduating with two degrees in International Economic Relations, George A. Kos worked on specialty jobs. However, his interest in the history of secret organizations, and love of reading fantasy stories, would often steal his focus. Kos would imagine different and unusual stories. He knew at that moment there was no turning back–he had to pursue his passion. Kos is very happy with his career choice to pursue writing. He enjoys sharing his stories with others and allowing them an escape. With the help of books, video/computer games, movies and cartoons, Kos finds inspiration for new stories. His niece, Diana, is a main source of his energy and passion for writing children’s stories.