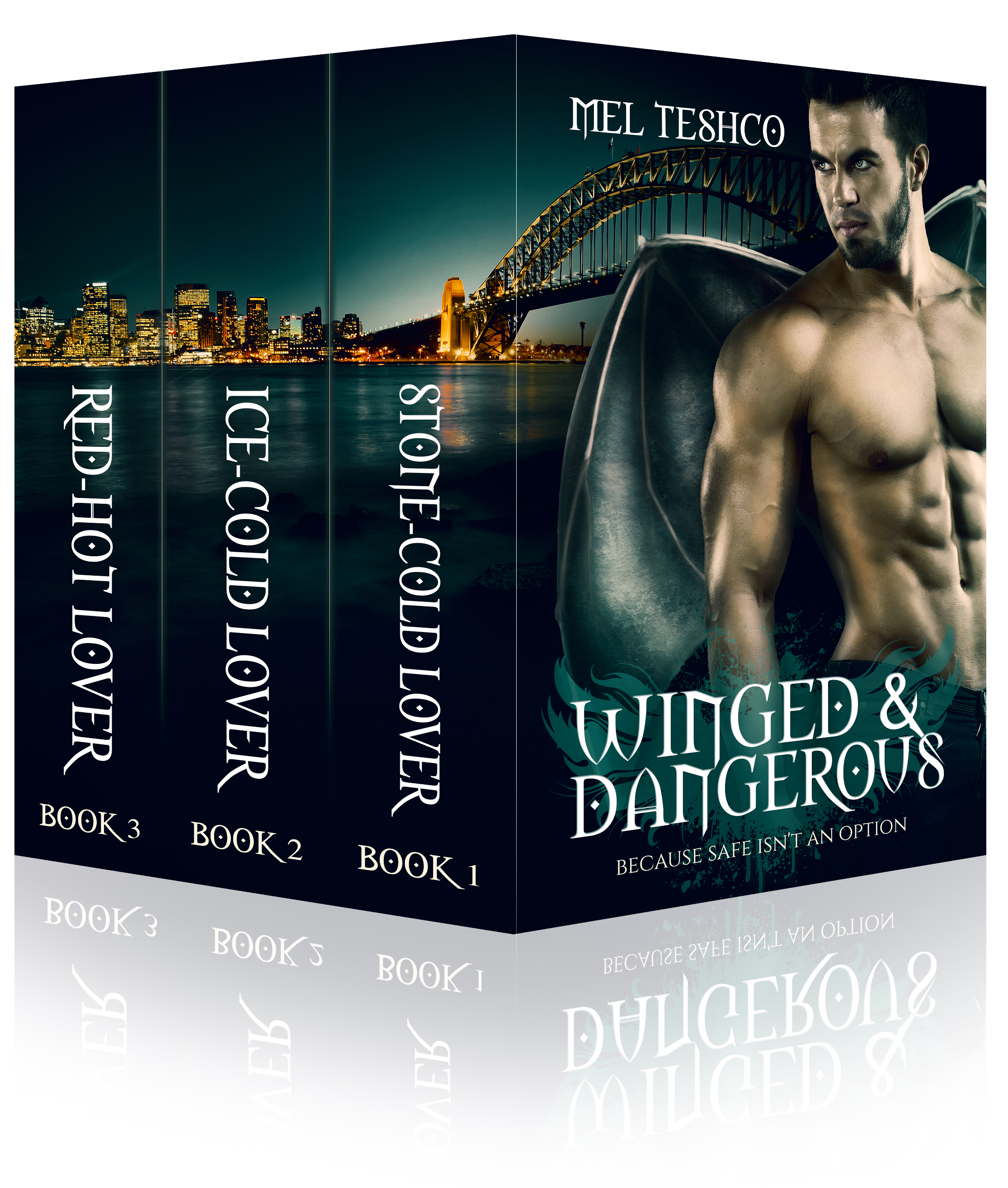 STONE-COLD LOVER
Book One in the Winged & Dangerous series

Heiress Loretta Shaw is notorious for her loose morals and sexual needs. Trouble is, it’s taken her one too many one-night stands to realize that no man can extinguish the sexual fire she feels toward her guardian, Cray Diamond.
A long-ago curse made Cray immortal—a gargoyle, a guardian, who is impelled to protect a human chosen by the curse. He is imprisoned in stone during daylight hours but dusk returns him to flesh and bone to carry out his immortal duty.
That Cray can shift between human and living gargoyle at night bothers Loretta not one bit. She’s seen him naked many times and her desire for him—in any shape or form—knows no bounds. She’s tired of his resistance. He’s her gargoyle … and she wants him in her bed.

ICE-COLD LOVER
Book two in the Winged and Dangerous series.

Celeste has been having vivid sexual dreams starring Pascal Daniels. The son of a mobster, he is every woman’s most dangerous fantasy. Pascal leads a charmed life and can have any woman he wants, any time he wants her. Celeste is determined to have him—but just once. Because she has a secret she will fight tooth and nail to protect. She is human in every way but one—hideous bat-like wings, a permanent legacy from her once-cursed gargoyle father, Cray.
Pascal is used to attention from women, but he’s looking for someone special. He’s interested in the ice queen, Celeste Diamond. He thinks hers is the perfect female form, one he’d do anything to possess. Pascal has decided it’s way past time to warm up the mysterious, elusive Celeste.
And perhaps he’ll share some secrets of his own.

A hot-blooded gargoyle, Zahlee knows that Steele, her gargoyle lover and leader of the Triskellon clan, is her perfect match in every way. But she burns for just one more touch from Saul, the human lover she left behind so many years ago. The same human she entrusted to raise and care for her son, Pascal—to keep him safe from the dangers of the gargoyle lifestyle.
Steele banishes Zahlee from the Triskellon clan and forces her to return to Saul and extinguish all yearning for her mortal ex. She quickly discovers a renewed lust for the only man she has ever loved. Their chemistry cannot be denied and combusts into a raging wildfire she never wants to end.
Zahlee yearns for happiness with her son and her human lover. A gargoyle must sacrifice much to live in the human world, but she is willing to give all for their love.

What Inspired You to Write Your Book?
I wanted to write something different than the usual vampires and werewolves (not that I don’t love them too – I’ve written a story or two on them) and knew that nothing less than a gargoyle would do. I loved that they can only glide through the air – being able to fly gives them too much power, and I like cracks in their armor, so to speak – and with self image problems added to the mix, it creates a really unique hero or heroine. Being that this is a boxed set, I have three gargoyle stories, for three times the enjoyment =)

How Did You Come up With Your Characters?
My first story was pretty unique – my gargoyle was only a gargoyle because of a curse, which also compelled him to be a guardian. He falls for a spoiled heiress who looks for love in all the wrong places. My second book is the daughter of the gargoyle from book one. She is human in every way, except for her permanent wings she keeps tucked away inside a corset. She falls for someone completely unsuitable – a man who is a womanizer and loves to touch. My third story is based on a gargoyle clan, whose leader throws out the woman he loves so that she can be with the human mobster she’s never stopped wanting. All three stories came to me in scenes in my head – I had a lot of fun making them all work!