You are here: Home / Fiction / Action & Adventure / We Are Savages by Jessie Atkin 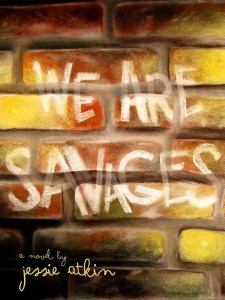 We Are Savages is the story of 12 year old Tris and what she finds when she runs from the responsibility of her household and descends through a rain grate into the child run world of Nowhere. “You go to bed angry or sad enough you can wake up just about anywhere,” the Savages tell her. Nowhere is a brick utopia hidden in the sewers; made up of sweets, sports, hammocks, and fireflies. But even this haven, free of parents and protocol, is not everything it seems. Haunted by dark specters known only as Phocydes, feared for their reputation of consuming children whole, Tris works both to hunt and to hide from these hooded shadows. But something about them is familiar; something about them fires her curiosity more than her fear. And Tris slowly begins to realize that, no matter where you go, fear and responsibility are not things you can escape. The only thing to do is face them.

What Inspired You to Write Your Book?
When I was cast as Michael Darling in “Peter Pan” in college I began to wonder what Neverland would look like today, rather than in 1904 when Barrie was writing.

How Did You Come up With Your Characters?
My main character, Tris, she sort of found me. I was in college when I started writing, “We Are Savages” and I really missed my family dog. So Tris, and her dog Mars, sort of represented me at that time. But Tris grew into her own person as I wrote. I never outline, I let the story and characters speak to me (particularly in the first draft).

Book Sample
Tris moved quickly to the wardrobe and pulled on a pair of jeans, and a T-shirt to go with her basketball sneakers. Lastly, she moved toward her bed and rescued one of her favored shirts from its hiding place beneath the mattress, tying it about her waist. Mars circled the floor and sniffed the bag before Tris shouldered it. He seemed to approve. She nodded at him, and he followed without a sound.

Tiptoeing, as only children seem capable of doing, Tris placed the collection of dolls, accessories, and magazines at the threshold of her parents’ room at the other end of the hall. She couldn’t face them, but she would leave her mark. To further emphasize the statement she intended the pile to make, Tris pulled off her name bracelet, the only item in her possession engraved with her full given name, a name not even Mr. and Mrs. Simon dared use anymore. It had been a gift from her mother a long time before Tris would have any memory of being given it. She placed it atop the pile. Perhaps if her mother returned it to whatever store she’d bought it from, she could then use that money to pay for the light in the hallway that she so desperately wanted repaired.

Mars neither barked nor begged as the pair made their well-practiced way down the stairs. The hallway was once again empty and free of glass. Nighttime excursions were no novelty where Tris and Mars were concerned. Spies work better in the dark, and, if you set the volume right, you can watch whatever you like on TV. It was the front door that the pair had never needed to work with before, and Tris struggled to find the right key on her father’s ring. But Mr. Simon only had so many keys, and eventually the door had to click.

Tris let Mars out first and followed without so much as a second glance at the hallway behind her. The door snapped shut. It didn’t sound loud or disturbing, but resolute and final. The air outside was still as death, and silent as it too. The rain hovered above, unable at this late hour to free itself once more. There was not a star in sight. The ground remained slick underfoot as Tris and Mars headed together toward the end of the driveway, Mars stopping every few paces to make sure Tris was still behind him.

The neighborhood was dark, as any obedient suburban street should be at such an hour. There wasn’t a lighted window or car in sight. It was only by the streetlight that Tris could be sure to step on every crack in the sidewalk as she went along. Every good memory Tris possessed seemed to have taken place within five miles of her home address. Her first day of school, bike riding, learning to swim, birthday parties, finding Mars—everything existed in the bubble that was five miles around. Outside of that bubble lurked Mr. Simon’s bank, Mrs. Simon’s lunches, the doctor’s office, and the department store. Tris could tell the bubble was slowly beginning to burst, and she was prepared to move both herself and Mars out of its path.

Tris turned onto the main road leading toward her school, continuing to stretch for each sidewalk break. Mars seemed to be stretching for every puddle. Tris could feel the tops of her socks slowly soaking through to her skin. The splash of the puddles and the tap of Tris’s sneakers created a comforting rhythm among the dead night air, so it was a few moments before Tris heard the trickling of water clearly.

Spotlighted in the streetlight ahead was a large drainage grate that sparkled and gurgled through its round, covered mouth. Mars trotted ahead to take a sniff. His fur seemed to glow especially red in the spotlight and the watery mist that hung in the air. Tris stood mesmerized by the great breaks in the lid, opening purposefully into the gutter below. She began to skip toward her target.

Tris pounced for ultimate effect and felt the ground disappear. There was nothing but air around her feet, no solid substance of any kind. The grate had given way beneath her, seeming to swallow the street and the lamppost with it.

Tris gave a yell and found herself in true darkness, snaking down a huge, wet pipe, Mars barking at her heels. Tris struggled around her backpack in an attempt to reach Mars behind her, but the drain snaked again throwing her hard on her side. She couldn’t see her own hand in front of her face and could not tell where and when another turn would whip her sideways again.

The water rushed beneath her, soaking her to the skin. Mars barked again, but he did not sound scared. The rushing of the water grew louder as Tris descended the slime-covered slide, until a roar of water engulfed her ears and she found herself soaring through the air once again before splashing down into a great surging river below.

Buy We Are Savages On Amazon