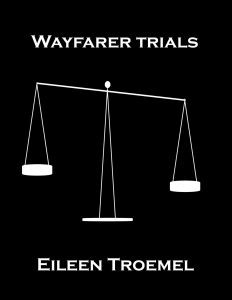 Returning from their honeymoon, Decker and Adara are thrown in the deep end of the cases under investigation. Women are being attacked and taken by an unknown group of people. Franklin and the rest of the investigators work to close the complicated case against the Castitate Colony and Patrick Richardson, putting the Pritchard and her crew in grave danger.

What Inspired You to Write Your Book?
With this book, I wanted to show the complexity of life as an investigation ship. I delved into trafficking of sentient beings, treatment of women, organized crime, and how it all affects those on the ship. I also wanted to continue with Adara’s broadening roles.

How Did You Come up With Your Characters?
Returning on a wave of bliss from their honeymoon, Decker and Adara face emergencies even before they return to the Pritchard. I wanted to explore how marriage works and changes the main characters in this book. Decker keeps threatening to lock Adara in their rooms but she keeps insisting on doing her job.

Book Sample
Owyn stepped into med bay. He didn’t want to see the healer, she would know immediately he had bruised ribs again. Rubbing them unconsciously, he looked around for Healer Tome. Cara stepped into the main room of med bay. She could see the young man had been fighting again. “Come with me,” she said. Leading him to a secluded exam room, she said, “Take off your shirt.”
“There’s no need,” Owyn denied knowing it was futile to argue with her.
“The bruised ribs on your left side say otherwise,” Cara said. “Why do you keep fighting?”
“A question I’d like answered,” Adara said as she stepped into the exam room.
Owyn started to rise, “Clan Leader Stone.”
Adara waved a hand for him to stay seated. A black, blue, green bruise marred the left side of his ribcage. He had the remnants of a black eye. If she wasn’t mistaken his nose had recently been broken. “Healer Tome will you give me a moment with my clan member, please?” Adara asked annoyed to see one of her clan members battered.
Cara Tome handed Adara the salve she used for bruises. “He needs a good coating of this on those ribs,” she said.
Adara took the salve and moved towards Owyn. “You shouldn’t do this,” Owyn said. “You’re my clan leader.”
“You think clan leaders don’t put salve on their injured? Lift your arm,” she commanded. She rubbed the peppermint smelling salve on his ribs not slowing when he winced, “Why are you fighting? And don’t you dare give me some ridiculous excuse about it being training injuries. If it’s truly training injuries, I’m going to file a complaint with Lena about her training methods.”
“Ma’am,” he said formally. “What I do in my off time is really no one’s business.”
Adara rubbed more vigorously, “You forget who you’re talking to. Everything you do on this ship represents our clan. Owyn is someone giving you a hard time?”
“No, ma’am,” Owyn said scowling at her.
“Are you doing it for credits,” Adara asked.
“No. I make plenty as a private in the services,” Owyn said.
“Who and why are you fighting,” Adara said.
“Ma’am,” Owyn said. “It doesn’t matter. I’m handling the situation.” Adara stared at him. He squirmed and blurted, “There are fighters who are betting on you.”
“You mean the baby pool,” she said.
“Yeah,” he said. “It’s disrespectful.”
“You’re fighting for your clan leader’s honor,” Adara asked.
“Yes, ma’am,” Owyn said. “They shouldn’t speculate about private matters.”
“Owyn, you and most other Wayfarers can see, can tell when a woman is pregnant. Humans can’t,” Adara said.
“You’re a Lieutenant Commander,” Owyn said.
“Who is married to the captain and is a Wayfarer clan leader and a services negotiator,” Adara said. “Most of those fighters were there when they rescued me from the Barions. It isn’t a disrespectful thing. It’s more they’re curious and hopeful.”
“And they want to win some money,” Owyn said.
“That too,” Adara said. “Do you start the fights?”
“I tell them to stop gossiping and betting on you,” Owyn said.
“When they don’t, do you throw the first punch,” Adara said.
“No, ma’am,” Owyn said with a quick grin. “I finish the fight.”
“You know the best way to finish a fight is to not get in one to begin with,” Adara said. “Lena says you have a promising career ahead of you, unless you continue with this fighting.”
“Did she,” Owyn eyes sparkled with pleasure and pride. “Did she really?”
“I could see you as a sergeant,” Adara said. “You should make a point of finding a mentor who can lead you to your goal, if it’s one you want.”
“It is,” Owyn said. “Do you think Sergeant Letto would mentor me? I’m just a kid, I know but she has such a good reputation. When I was training they talked about her a lot. She’s good. She’s really good.”
“Do you see her fighting like you are,” Adara said.”
“Of course not,” Owyn said. “Oh. I see what you mean. Clan Leader, are you going to punish me?”
“No,” Adara said. “Not this time. If you get in another fight, I will see if cook has some pots to clean up or decks to mop.”
“Thank you, ma’am,” Owyn said.
“You better figure out how to make it right with your sergeant,” Adara said. “She doesn’t like it when her fighters don’t come to her with their problems.”
“I… you want me to go tell her what’s been going on,” Owyn said. “Don’t you?”
“What do you think Lena would want,” Adara asked.
“I’ll do it,” Owyn said hanging his head. “It might cost me my position.”
“Whose fault would that be,” Adara said. She knew it wouldn’t but it didn’t hurt for him to think it would. Maybe he would think before he acted next time.
“Mine,” he said. “I’ll go to her right now.” He reached for his shirt.
“You will get clearance from Healer Tome first,” Adara said. “Owyn,” she poked his ribs making him flinch. “No more fighting over betting pools.”
“Yes, ma’am,” he said.