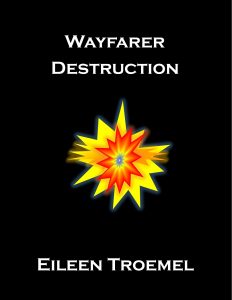 While the Pritchard gets repaired, Adara and Decker fall into life at Command. Sabotage and danger shadow them on the station. Once the ship is repaired, Decker, Adara, their crew, and Adara’s pilots head out to make contact with the Hettians. Along the way, Rhia, Franklin, and Avin face a serial killer. Adara can’t shake her bad feeling. Maddock is kidnapped and Oakes predicts another loss.

What Inspired You to Write Your Book?
I wanted to bring in contradictions in this book. Adara has to deal with a diplomat who doesn’t like aliens. She learns tact and command from the situation. Danger and loss are the key themes in this book.

How Did You Come up With Your Characters?
Obsession drives many people to do rash things. In this book I take a closer look at people who are obsessed. Additionally, my characters are all in a high stress, dangerous situation. It was interesting to explore how to have them cope with the situations.

Book Sample
Testing a new ship meant the ship was hauled out into space, a dead area of space where no traffic was, and the engine started in space before being put through its paces. First flights meant a number of things could go wrong. The pilot’s area had to be separate from the rest of the ship so the pilot could escape. This didn’t always ensure the pilot survived if there were a catastrophic failure.
Adara wore a safety suit, which would prevent her from burning if there were a fire in the pilot’s area. The helmet gave her oxygen if she were evacuated into space in the worst case scenario. Before donning the helmet, she kissed Decker, “I’ll be fine. It’s a short twenty minute flight.”
“Come back to me Adara Stone,” Decker said against her lips.
She kissed him again, put on her helmet, and stepped into the new sleek shuttle. The hatch closed behind her. Decker went to the observation area with his father and Cara.
“The engine’s been tested before,” Joseph assured him. “It hasn’t been tested in this design. It should be a quick and easy flight.”
Decker said nothing watching as the shuttle was towed to the test area. The tow vessel disengaged and moved away a safe distance.
Over the com, Tom Riley said, “Adara, you have a go for starting the engine.”
“Starting the engine now,” Adara said. “Readings appear normal. Tom did you change out the engine?”
“No, it’s the same engine that was in there yesterday when you inspected it,” Tom said.
“Sir,” a blond technician said. “It was changed out last night.”
“What? Why? Under who’s orders,” Tom asked.
“Orders came down from Command to try the updated engine with the new exhaust,” the tech said. Decker gripped the arms of the chair he sat in. Cara placed a comforting hand on his shoulder.
“This is not the same engine,” Adara said. “It’s overheating. I’m shutting it down.”
“Shit,” Joseph said. “Look at these readings. She definitely needs to shut it down. It’s redlined in under two minutes.”
“Adara,” Tom said. “Shut it down.” He turned to the technician. “Why wasn’t I informed about the engine change?”
“I don’t know, sir,” the technician said. “I assumed you knew.”
“Send the tow ship…” Tom broke off as Adara came over the com.
“The engine won’t shut down,” Adara said. “Trying a manual override.”
“She’s topped out all the readings,” Joseph growled.
“Manual override isn’t working,” Adara said. “I’m going to have to eject.”
“Adara, try moving her, maybe shifting her some distance will lower the heat and prevent the overload,” Tom Riley suggested.
“Engaging forward movement,” Adara said. “I have no movement. I’m stuck, well and truly stuck. She’s going to overheat, she’s going to overload. I’m going to eject.”
“Yes, eject and we’ll have the safety ship pick you up,” Tom said. “I want to know who ordered the change,” he growled at the technician.
Decker rose, cursing as the shuttle exploded in a ball of bright orange fire. “Adara,” he whispered, agony ripping at him.
Static fuzzed on the com while the room erupted into chaos. Calls to the safety vessels went out. Joseph sat heavily in his chair, head in his hands. “Oh, god,” he muttered.
The drone of the static broke, fuzzed, droned again. “…right. I’m all right,” Adara said. “But I could use a lift back. My suit’s damaged.”
Tom Riley swallowed hard, relief thundered through him. “Get me that name. I want it ten minutes ago,” he growled at the technician.
“Yes, sir,” she said leaving her station.
“Safety vessel alpha to base,” squawked the com. “We have her on board. She’s a little singed but in one piece. Ten minutes to return.”
“Where,” Decker said. “Where will they bring her back?”
“I’ll take you,” Tom said. “Healer Tome, please tell me what you’ll need.”
“Mr. Flannery, the elder, needs some tea. It’s in my bag. At a guess, once Decker has Adara in his arms, he will need some as well. As for Adara, I won’t know until I see her,” Cara said calmly as they headed towards the landing bay for the safety vessel.