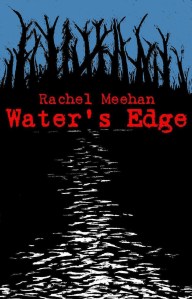 THE CLIMATE IS CHANGING.
Thousands are fleeing the chaos and social unrest.
With their own water and power supplies, fourteen year old Nairne and her family are well prepared, but most people are less fortunate. When Nairne persuades her father, Daniel, to house some of the evacuees on their small holding in the south of Scotland she plunges the family into a world of violence, deception and murder.
With society at breaking point, she has to grow up quickly as she discovers that the fortress Daniel built to give his children a chance has become the prize in a struggle where winning can mean the difference between life and death.

What Inspired You to Write Your Book?
I love reading young adult fiction and so it seemed natural that I would write for this age group. The idea for the Troubled Times series of which Water’s Edge is the first in a series of three was a long term interest in the environment and our impact on the planet. I wanted to explore how developed countries would cope when faced with the realities of climate change, which many poorer countries are already facing. I also wanted it to be set somewhere i know and be based around a family and the impact of change on their lives, relationships and future.

How Did You Come up With Your Characters?
My main character Nairne, is a fourteen year old girl and I guess I wanted her to represent all the complex struggles which many teenagers face. She is a strong female lead, which I think is important in an age when young girls are often stereotyped and appearance is rated more importantly than character.

Book Sample
The sun beat down on Nairne as she crossed the garden; her hair, damp with sweat, clung to the nape of her neck. She placed the steel watering can beneath the water butt and turned the tap. Lifting the lid of the butt she peered at the cool water; only the slightest ripple indicated that the precious liquid was seeping away. She filled the can three quarters full so it was easier to carry and there was less danger of spilling it. She watered the lettuce, carrots, tomatoes and finally the beans, but there was insufficient water for the potatoes; they would just have to take their chances.
Placing the spout close to the base of the plants she watched the dusty soil turn a chocolate brown. The liquid puddled on the surface then sank in slowly. Nairne liked this part of the day: better than hoeing, she thought, as hours had been spent shearing off the weeds between the regimented rows of vegetables. She glanced at her watch: it was six fifteen, but there was still no sign of her brother Zane, or Dog. Their stomachs would tell them it was time to come home. They usually spent the afternoon in the woods shooting rabbits, but with the drought rabbits were scarce this year. So Zane would be fishing or more accurately lying on the riverbank dozing, with Dog resting patiently next to him; another of their favourite pastimes.
Nairne heard her father’s pick-up truck rumble up the potholed driveway long before it came into view. He parked outside the front of the house and waved to her before taking a couple of shopping bags inside.
As she gathered the tools and returned them to the shed another car approached more cautiously, trying in vain to avoid the most damaging holes. It swung into view. The driver emerged first, a tall man with black trousers and a dazzling white shirt. From the passenger door, a young woman appeared; she put on her hat and together they marched up to the front door and rang the bell. Her father let them in.
Zane’s in for it now, she thought. It wouldn’t be the first time one of them had got into trouble, but the police; what has he been up to, she wondered? Several minutes passed before her father reappeared.
“Nairne, where’s your brother?”
“How should I know?” she responded, but his expression showed this was not a time to talk back. “I’ll go and find him,” she added and ran off towards the woods.
“Zane! Zane!…” She raced through the trees towards the riverbank. Her instincts were right; she could see his prone figure, hat covering his eyes and fishing rod lying abandoned at his side. Her call startled him. Dog lifted his head, barked and bounded towards her.
“What’s the matter?” Zane mumbled, having just woken. “What’s all the noise for?”
“You tell me – come on, get your shoes on. We need to get back to the house. The police are here to see you!”
“Yeah, very funny….” He paused. “Really?” He could see from Nairne’s expression that this was no joke. He slipped on his trainers and charged after her, while Dog ran backwards and forwards between them.
“Hang on Nairne, wait for me. I don’t understand. I haven’t done anything!”
“Well, the police are here and dad didn’t look too pleased so you must have done something.” Although she was desperate to know what he’d done, she was also very protective of him. Zane was fifteen and a half, older than her by almost two years, but much younger than her in many ways. He was simple; at least that’s what the other kids at school said. Dad said Zane was special. She liked ‘special’ better.
“Oh come on, it can’t be that bad,” she paused to let him catch up. She could see he was scared.
As they entered the house, Zane grabbed her hand. The policewoman was in the living room with their father, who was leaning against the mantle shelf. He did not turn round. The other officer was in the kitchen making tea. No one spoke. Nairne glanced at the female officer. She was young with a plain face, which wore a look of professional concern.
“What’s wrong?” Nairne could feel her stomach knotting and a rush of anxiety. “Dad, what is it?”
Zane squeezed her hand; she could feel his breath on her neck. Their father did not move. The policewoman spoke.
“Nairne, Zane, I’m sorry, we have some very bad news for you, why don’t you come over and sit down?”
“No, we’re fine here. What is it?” Nairne replied curtly.
“I’m sorry to tell you – it’s your mum – I’m afraid she passed away yesterday.” The silence was broken by the sound of Zane’s sobs. He rushed to their father who hugged him tightly.
“How did she die?” Nairne asked.
“It was a fire; you might have seen reports on the news. The block of flats where she lived had been quarantined; it was at the centre of a dysentery outbreak. Several residents had already died; your mum was on the list of those infected and was due to be taken to hospital the next day. Unfortunately a rumour started circulating that infected people were trying to leave the building and there was a disturbance. Local people took matters into their own hands and someone set fire to the building. Your mum is one of those reported missing, presumed dead. The blaze was ferocious.” The policewoman’s voice was soft. “I know it’s a terrible shock, but it’s OK to cry.”
“I’m not going to cry. As far as I’m concerned my mother died years ago,” Nairne replied.

About the Author:
Rachel Meehan lives in rural, southern Scotland and has been writing fiction for a number of years, concentrating on the young adult genre. This passion for writing comes from Rachel’s artistic background and reflects her own interests in plot-driven writing that has its context in real life.
Rachel loves reading fiction especially, young adult, end of the world and dystopian novels. Her favourite authors include Gudrun Pausewang, John Christopher, Alex Shearer, Patrick Ness and John Wyndham. She also has a keen interest in the environment.
Rachel lives with her partner, and their house is situated well above sea level where they grow much of their own food and generate some of their own electricity.
Rachel checks her garden and surrounding areas regularly for signs of triffids……