You are here: Home / Fiction / Fantasy / Torn by Charissa Dufour 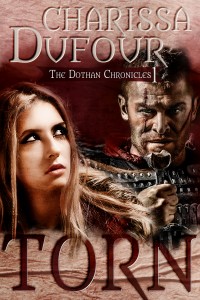 *This is a completed series*
King Wolfric Eberhand battles the last nation to stand against his raging armies. With help from the deadly knight, Sir Erin Caldry, he hopes to conquer the land of Dothan once and for all. Using his wealth and power, he has formulated the perfect plan to finally take their rich land. What he doesn’t realize, is the youngest Dothan princess is currently a slave within his very own castle walls.
While out visiting the remote estate of a relative, Princess Bethany Kavadh is kidnapped by slavers. Bedraggled and weary, she finds herself sold into slavery. To her horror, she soon discovers that her new owner is none other than her family’s worst enemy, King Wolfric. To fight her rising despair and to keep what little sanity she possess, Princess Bethany begins to fight back, sabotaging the efficient running of the House and function of their Armies.
But what happens when they realize her true identity?
Will they ransom her for the wealth of her nation?
Will they keep her as a slave? Or will they inflict an even crueler punishment?
The only things for certain are: The war between two nations will escalate, and one young princess’s life shall forever be TORN.