You are here: Home / Fiction / To Have and To Hold by Trae Stratton 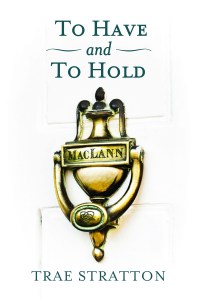 Colin MacLann is getting married and you’re invited.

As the hour of the ceremony draws near, Colin, his family, and friends, can’t help but recall the many poignant moments that have shaped and led him to the altar. Utilizing a sentimental blend of flashbacks reminiscent of “The Notebook” and How I Met Your Mother,” these memories propel the story forward by closing in on the present and offering clues as to who the bride will be: Cindy, Haley, Tessa, Monique or Cara.

Written almost exclusively from the perspective of the groom and his family, “To Have and To Hold” is a rare reversal of romantic focus that turns a simple love story set in the suburbs of New York City, into a timeless family saga. Fun and light with a compelling subplot involving the identity of the bride, this novel is sure to charm anyone who enjoys happy endings, mysteries or both.

What Inspired You to Write Your Book?
As a kid I was inspired to write and create by comic books and Dungeons and Dragons, so it was a big surprise when this family saga/contemporary romance came out first! As an adult, I think its life’s natural magic. The spine tingling moments, the lump in the throat moments that happen to us all every day. Trying to capture them on paper is what inspires me now. For this book in particular, it was the bride’s entrance to the church that got the ball rolling. It’s such a dramatic real-life moment, and I thought it would be really cool for readers if I could make that moment larger than life by keeping the bride’s identity a mystery until she walks in. The whole book grew from that initial seed.

How Did You Come up With Your Characters?
Organic trial and error. I needed a big family to introduce my bevy of “suspect” girlfriends and deliver the clues as to which of them would be walking down the altar. So just the setup of 5 girlfriends, the groom and his friends and family populated the book with 13 characters to start with! Obviously some are more developed than others, but the girlfriends were hardest because I wanted the reader to be conflicted with who they would root for to be under the veil or there would be no mystery. Two of the most rewarding comments I’ve received about the book so far are: “I think Colin married the wrong girl…” and “I hate that guy Foster, how can Colin even be friends with him?” When I hear that, it makes me feel like I’ve done my job well as a writer.

Book Sample
At the heart of “To Have and To Hold” is the strong central bond shared by the MacLann family. For them, and all of us I suppose, happily ever after isn’t the final result. It needs to grow and breathe and mature through crisis if it’s going to survive and thrive in the future. This is one of the lighter “crisis” moments of the novel, and very illustrative of the uplifting, light, feel good tone you can expect from “To Have and To Hold.”

About the Author:
I was lucky enough to grow up in College Point, New York, at a time when kids could still be kids and sometimes were for too long. Today I still reside just outside The City, and can’t imagine living anywhere else.

I graduated from Wagner College, where as a senior, I won the Jack J. Boies Award for Creative Writing with a science fiction story called “Guns.”

Growing up, my friends and I played a lot of Dungeons & Dragons, so you can imagine how elated I was when my first published work, a mini-adventure called “Mayhem at Midnight,” appeared in the pages of DUNGEON Magazine (Issue #43).

Writers need stories to tell. They also have to pay the bills, so I joined the NYPD in 1992. Ten years later, on the strength of a work sample that eventually became the basis for No Regrets (THTH Chapter 10), I was transferred to the Department’s in house magazine: SPRING 3100. After collecting lots of great stories (and hopefully writing a few too), nine years of Medal Day Madness, earning a Certificate in Journalism from NYU, meeting lots of interesting people, and quite a few memorable Christmas parties, Detective Stratton retired to fill an urgent opening in a newly created position at home: Mr. Mom.

​I work harder than ever now, but I also laugh much more, and get to do it in “civilian clothes” all day, and more often than not, my pajamas for most of the morning.

While working full time, getting engaged at the Empire State Building, getting married, buying a house, coping with 9/11, and becoming a father, my first novel “To Have and To Hold” took me over 12 years to write, edit and publish. Set just before the advent of the digital age, it’s a heartwarming walk through yesterday, a time not too long ago when your neighborhood really could be your whole world.

Going forward, I hope to have better luck outwitting the forces of time and space to make time at the keyboard and complete subsequent novels at a faster clip.