You are here: Home / Fiction / Action & Adventure / TITAN: From Earth’s Past A Hero Rises – Adventures of an Olympian Book 1 by Jeff Fuell 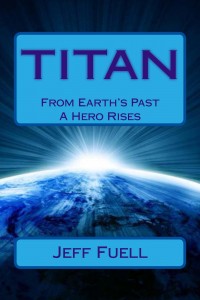 Gaius Richards is a teenage boy born of two worlds who just wants to go to high school and live a normal life as he connects with his mortal roots. As the hero “Titan,” an immortal from Mt. Olympus and the son of Gaia, he is also the strongest person to ever walk the face of the Earth. Christine is a smart, overly-serious girl who accidentally stumbles onto his secret, and through the wisdom of the gods finds that maybe it was not an accident that they were meant to find each other. As they fall in love, the two of them will together face the greatest adventure of their lives as Gaius, Earth’s sworn protector, will face the greatest battle of his life as he attempts to stop a human killing machine long thought dead from wrecking havoc on his adopted home. Can an Olympian die, or will he be able to find the strength to not only save himself, but everyone he holds dear?
From the author: I love super heroes. Comic books have been a large part of my life for three decades and I have fond memories of losing myself in those colorful pages for hours on end. When I set out to write this book I wanted to capture the essence of those wonderful books that I read when I was a kid and put it into novel form. Hopefully, I have succeeded.

What Inspired You to Write Your Book?
I have always loved super heroes and comic books, especially considering the fact that own over 133,000 of them. It seemed only natural that I would eventually get around to thinking up my own hero and writing a book about him. Going into it I knew two things – I wanted him to be incredibly strong and I wanted him to be a teenager. To make the story as believable as possible I knew I had to tie the character into history, which is how the Greek Mythology angle came to mind.

How Did You Come up With Your Characters?
I love comic book and when I decided to sit down and write about Gaius, who is the hero of the story, I did a good amount of research on Greek Mythology. As I was doing so that I was when the story started to really flesh itself out.