You are here: Home / Fiction / Fantasy / The Wolf Queen by Kelley Heckart 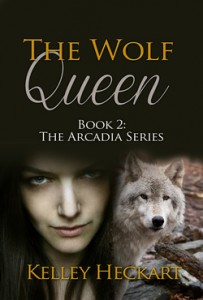 A new twist on Beauty and the Beast and the Greek myth of Lycaon the werewolf. A Bronze Age fantasy, adventure, and romance set in Arcadia, the wild forests of the goddess Artemis… Game of Thrones meets The Iliad…

A tormented wolf man… A mysterious girl with a terrible secret…

Alara, a princess from a foreign land, is forced to wed the sorcerer-king Aramon, a power-hungry warlord, who discovers her dark secret and wants to use her to create an invincible army. When she meets Lycaon, she must decide if she should trust the cursed, tormented half-man half-wolf who might be her enemy or her true mate.

Lycaon, once a great king until he was cursed by Zeus to be a werewolf, is drawn to the mysterious princess. He is torn between helping Alara escape and using her to gain power over those who despise him.

Secrets abound and old enemies are reunited to battle Aramon before his terrible plan is unleashed. Time is running out as the dark moon approaches. Soon, Arcadia will be overrun with an unstoppable, vicious army unless Aramon can be defeated. To prevent his victory, the cost is high. As Lycaon’s affection for Alara grows, it becomes more difficult for him to decide which to save: Arcadia or her.

What Inspired You to Write Your Book?
The Greek myth about Lycaon, the king cursed by Zeus and turned into a werewolf, inspired me to write this story. I finally found a way to incorporate werewolves into a book, something I’d wanted to do for a while. With Lycaon, I also had a tormented hero, another thing I’d been wanting to do, so there is a bit of Beauty and the Beast in this story as well.

How Did You Come up With Your Characters?
I drew on all the aspects of Greek mythology and everything I’d read about Artemis and her wild forests of Arcadia where nymphs, satyrs, centaurs, and other creatures lived. I expanded on this to bring in werewolves, vampires, and mysterious crow women. Lycaon was mostly created from the Greek myths, but my heroine, Alara, is from a foreign land. I wanted her to be different from the people in Arcadia so she would stand out. At first I wasn’t sure if I should make her otherworldly or not, but decided she just might be the real beast of the story. If I say more I might give too much away. Anyway, I had a lot of fun creating these characters. My nymphs are different from the flighty nymphs of most myths because Artemis’s nymphs were huntresses and fierce in comparison to others. They each have an aspect of the elements–earth, air, fire, and water.

Book Sample
Although she had been warned of Lycaon’s band of misfits, seeing them watching her with cold eyes made her skin crawl. “Y-you are a goat man.” She stared in astonishment at the horns, the pointed ears, and goat legs with hooves covered in thick brown hair. Despite being half goat, he was the most handsome man she had ever seen with bright, slanted blue eyes and shoulder-length dark brown hair, some strands knotted into warrior braids. A belted loincloth covered little, revealing a muscular upper body.
He raised a bushy eyebrow. “I prefer satyr.”
The other odd-looking people laughed.
She opened her mouth to speak again, but the circle parted and a man stepped forward. A hood covered his head, so she could only see glimpses of his face—a flash of fang-like teeth, fierce eyes, and lots of dark hair. She shrank back from the man who looked like a mix of human and wolf.
“Who in Tartarus are you, and what are you doing in my lands?” His voice sounded like a vicious snarl.
Transfixed by his appearance, she wondered what the rest of his face looked like beneath the hooded tunic. Towering over her, his muscles strained against the dark brown woolen tunic and deerskin leggings he wore. Masculine power encircled him like a god’s nimbus, in the proud way he carried himself, and in the way he commanded their attention, for even his companions stepped back and looked at him with reverence, even the giant who barely stood taller than what glared at her now.
Alara eyed his large feet covered in laced up leather boots, afraid he might kick her, his anger at her quite apparent by the claw-like hands, partially covered in fingerless leather gloves, fisted at his sides. All she could see were his eyes, framed by heavy, dark, forbidding eyebrows, fixated on her from within the hood. Ice blue and emerald green rings. Fiery golden flecks. Intense and feral. She would never forget them. He held back his anger, but for how long? “I-I came…” His fierce stare made her forget her speech.
****

Buy The Wolf Queen On Amazon