You are here: Home / Fiction / Fantasy / The Water Road by JD Byrne 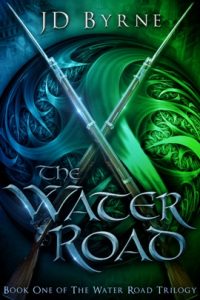 Two women are about to expose a terrible secret that will turn their world upside down.

Antrey is a woman without a country, the daughter of a Neldathi mother and an Altrerian father. She’s found a role for herself in Tolenor, the headquarters of the Triumvirate, that’s given her access to a secret the alliance has kept for generations. When she finds it, she explodes with rage and embarks on a quest to find justice for the Neldathi people.

Strefer is a reporter without a story, desperately working the streets of Tolenor for any kind of lead. When Antrey flees the city, Strefer slips in and discovers her uncovered secret, stained with blood and fury. It’s the story of a lifetime, one powerful forces want to keep her from telling. With the help of a renegade Sentinel, Strefer sets out for a mythical city in hopes she can make the world listen to the truth.

What Inspired You to Write Your Book?
Napoleon, if you can believe it. As I explain in more detail on my blog (https://jdbyrne.net/2016/01/13/water-road-wednesday-je-suis-napoleon/), I thought the arc of Napoleon’s life – rise to power, exile, escape and Waterloo – sounded like the way a writer of a fantasy trilogy would bring back a main character when it looked like he was out of it. He became a she – a blue skinned she of mixed parentage in a world that isn’t our own – and The Water Road trilogy was born.

How Did You Come up With Your Characters?
Antrey, the one with the Napoleonic inspiration, came easily, as she’s the driver of the whole trilogy. I liked the idea of a character who was really in between two worlds, with a foot in each but a home in neither. It’s really about how she’s trying to make her place in her world. The other main character, Strefer, has a similar problem, but goes about dealing with it in a very different way. She’s more comfortable being a fish out of water, to the point that she’s not always aware of how precarious her status is.

Book Sample
“Antrey, you know how happy it makes me to see you so involved with books,” Alban said, adopting a fatherly tone, “but your grasp of history is rather shallow at this point. Bringing together the Guilders, the Arborians, and the Telebrians has brought out the best in all of us. It has shown that we can work together peacefully in common cause.”

“Can you actually hear yourself, Alban?” Antrey asked. “How can you make that argument, to me of all people, in the face of this enthusiastic embrace of bloodshed? I know you, Alban. You are such a good man. If not, I wouldn’t be here right now. Why would you, of all people, defend this?”

“Because it’s worked, damn you!” Alban shouted, all pretence of respect and calm shattered. “Because in the century since the Neldathi revolt was put down and this alliance was formed the Neldathi have stayed where they belong, in those horrible mountains south of the Water Road. Their nature is base. They seek only conflict and know only strife. Better those urges be turned on themselves than on us.”

Antrey staggered under the weight of his words, unable to respond for a moment. “Is that it, then, Alban? No matter how distasteful the means, so long as your people benefit, the suffering of others is all right? You care nothing for the Neldathi who dies, cold and alone in the falling snow, in the wake of some pointless battle?” Although she spoke calmly and chose her words with care, Antrey’s fury was still present and had begun to focus itself. Her initial reaction to the Triumvirate’s policy had been abstract, a rage against something done long ago by people long since dead. All that had changed, however, the more Alban talked. Now the anger in her was directed at the man in front of her. He was her employer, her mentor, and her savior. Still, she hated him for the secret he kept and the way he kept it.

As she had come around the desk, Antrey had somehow picked up the pikti, the ancient Sentinel fighting staff, that was normally propped in the corner of Alban’s office. It was so light that it felt like barely anything was there. The weight surprised her. She had held a sword once, a small one, and by comparison it was a clumsy weapon, a weight that hung on the end of her arm like a dead limb. Not the pikti. Even when she took it in both bands, it felt like a part of her, an extension of her will. As if it would do whatever she commanded. She held it out in front of her, hands about a foot apart.

“Antrey, put that down,” Alban said, raising his hands again. His tone had softened considerably since he, too, noticed the weapon in her hand. “You have no idea what that can do, and you’re liable to hurt yourself. Neither of us wants anyone to get hurt, right?” He started to back away from her slowly.

Buy The Water Road On Amazon