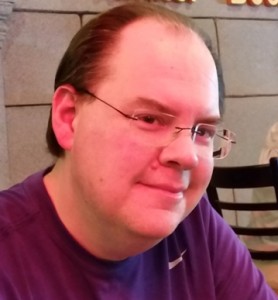 About JD Byrne:
JD Byrne was born and raised around Charleston, West Virginia, before spending seven years in Morgantown getting degrees in history and law from West Virginia University. He’s practiced law for more than 15 years, writing briefs where he has to stick to real facts and real law. In his fiction, he gets to make up the facts, take or leave the law, and let his imagination run wild. He lives outside Charleston with his wife, one-eyed dog, and black cat.

His first book, The Last Ereph and Other Stories, came out this spring. His first novel, Moore Hollow, will be released on October 5, 2015. His most recent short story, “The Destiny Engine,” is currently available at Amazon.

What inspires you to write?
I think there are two different kinds of inspiration.

The first is about why write at all, whatever it is. Part of the reason I write is that I like to play with words, like figuring out the best way for things to fit together. I’ve been doing that for years in my day job, but as an appellate lawyer you are limited to the real facts of a case. Writing fiction adds the joy of being able to tell whatever stories you like. I get a lot of inspiration just from the idea of having stories to share.

The second is more like the “where do your ideas come from?” question we all get from time to time. I’ve always said that inspiration is everywhere, but one of the great things about writing fantasy and sci-fi is that I can take real world inspiration and jump off toward completely different, exciting new places. A blurb on the news or a stray bit of information on the web can be the foundation of an entire story.

Tell us about your writing process.
I straddle the line between those who plan out everything and those who fly by the seat of their pants. I think there’s a happy medium, a place where I have some idea of where I’m going and who my characters are, but I’m flexible enough to let inspiration or need drive me somewhere else.

So I’ll do some notes on the world in which my story will be told and the main characters. Usually I have a solid idea of who those characters are, what they’re going to do, and how they’ll change through the story. But I tend to create the secondary characters on the fly as the need arises, which leads to some fun discoveries.

For example, next year I will have a trilogy coming out called The Water Road. It’s fantasy and I needed to do some serious foundational work before I started writing. I’ve got a crude map of the place where the story takes place, notes about the religious beliefs of one of the races involved, and a glossary of terms and character names to help me keep them all on track. But none of those survived intact during the writing process. The map got hasty additions when I needed a new place for characters to go and the glossary grew and grew.

As a particular character example, I’m working on a second draft right now of The Endless Hills, which is part two of The Water Road. I didn’t realize I needed a particular character before I got to the part of the story where she was needed. I pulled her out of thin air and she wound up being really interesting to write.

For Fiction Writers: Do you listen (or talk to) to your characters?
I don’t talk to my characters, I order them around!

I’ve actually never been a fan of thinking of characters as living beings who can talk back to you while writing. One of the great things about writing fiction is that I’m fully in control of what happens, to whom it happens, and when it happens. Having said that, it’s important to make sure that what you want the characters to do makes sense in terms of their motivations, goals, and their personalities as you draw them.

As an example, in my novel Moore Hollow (out October 5) the main character, Ben’s, story was originally about finding the answer to this old mystery and finding this small town’s secret. But by the time he did that it was much more interesting for me to explore what he’d do with that information once he had it. It gave the whole story a structure I hadn’t originally intended, but I’m really pleased with how it turned out.

I guess what I’m saying is that while I can make my characters to anything I want, it’s better to let them figure out what they need to do on their own.

What advice would you give other writers?
Get out there and be a part of the conversation with other writers and with readers. Listen to what those who have already gone through what you’re going through now have to say. Not everything that works for one writer works for another, but you don’t have to start from scratch in all this. I’ve found other writers to be really friendly, free with their time and advice, and supportive.

How did you decide how to publish your books?
I didn’t really think about publishing when I started writing. I think I wanted to convince myself I could actually do it first, then worry about what came after. Either that or I had this magical idea that all that would fall into place once I had something I could call a “book” on my hands.

When I had said book I started to explore the trade publishing route, looking for agents and whatnot, but it never really connected with me. It was much more appealing to me to be in full control of things, even if it meant a lot more work on my end and more risk. Whatever else is true, I can’t blame anybody else for how my books perform. That’s frightening at first, but ultimately it’s very liberating.

What do you think about the future of book publishing?
It’s very much in flux, obviously. I could see a situation where physical books wind up like vinyl records – after a brutal decline in popularity they rebound as a niche item. But I think books as “clumps of words that people read” – in whatever form – are going to keep getting better and better. More writers writing can only be good news for readers. Easier distribution methods means more of an opportunity for writers to find an audience, whether they self publish or work with a small publisher.

What genres do you write?: Primarily fantasy and science fiction, although things rub up against horror at points.