You are here: Home / Fiction / Fantasy / The War Queen by JM Robison 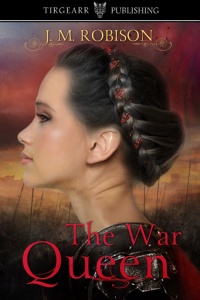 300 years ago, the people dethroned their king and queen to prevent another tyranny. Now instead, the people nominate a State Head every three years and Altarn is the first female to hold the position. She’s used to tolerating the biases of men but Kaelin, the State Head of his territory, has declared her incompetent and has even, according to Altarn, threatened to steal her land – she believes he wants to make himself king. Believing she must “dethrone” Kaelin, Altarn rides to her last ally to ask for aid in the war against Kaelin she knows is coming. But in her absence an army launches an attack… and it’s not Kaelin’s.

Taking advantage of the startling situation, Kaelin kidnaps Altarn so he can take her land without her in the way. Soon realizing he needs her help to fight this army instead, he releases her and, since Altarn’s army is too small to win the war alone, she is forced to accept his help, but payment for his help will be her land. No one believes Kaelin is secretly trying to make himself king, so after the battle is won, alone in her knowledge and lacking allies, Altarn must become the War Queen of legend to dethrone another king… though she unexpectedly dethrones his heart instead.

What Inspired You to Write Your Book?
I conceived the idea for The War Queen In 2008. I'd gone for a midnight walk to the pillars above ISU campus in Pocatello, ID. I'm fairly imaginative and always creating stories and scenarios in my head, so while sitting beneath the pillars by myself, I imagined that some god had fallen on the pillars and that's why they were broken. And so I began to write.

How Did You Come up With Your Characters?
I fashioned Altarn after me. Seeing we are both military and in the minority when it comes to our jobs, it made sense.

Book Sample
The daggered truth stabbed her. She sucked in a sharp breath, which left little room for words to defend herself. His apologetic eyes made it worse, like he was being truthful though she wished he’d said it just to be ugly. She didn’t know how to defend against the truth.
“I fail to see why you care,” she snarled. Her exposed weakness left her more nervous about leading an army, and the bucket of white paint became so obvious now and Japheron’s comment about it laid her entire self open, naked and ready for Kaelin to dress her as he pleased.
“I care,” he said, lifting a finger as if he could shove the understanding into her skull, “because you showed up to a war council in a dress.”
She laughed at the ridiculousness of his concern, but his eyes didn’t change.
“You’ve never had a dress in a war council, so I can see how it would appear odd to you.”
He pressed his lips together, and Altarn wished the real concern she saw in his expression wasn’t so earnest.
“You’ve never been to a war council, have you?”
“I don’t see how the proceedings are any different than a regular court session where other problems with equal importance are discussed. I have been doing that for a year.”
He exhaled and leaned back, crossing a boot over one knee. “It’s different for Ruids. We discuss war plans every week because of our pirate problem. The mood is different, the light in our eyes is different. It’s life and death we speak of, and that holds a special kind of ceremony we honor in our speech, in our manners, and our
dress.”
“Why would my dress not honor this ceremony?”
“It might…except you look like a damn princess. I don’t know about Blindvar, but we killed our princesses long ago. Your people don’t want a princess. They want a war queen. A princess can’t handle the emotional responsibility of sending people off to their deaths, but a war queen can. “You’d be surprised how willing your soldiers would be to die for you, so long as you did it without crying as they march away. They need to be reassured you’ll hold your ground when they cannot.”