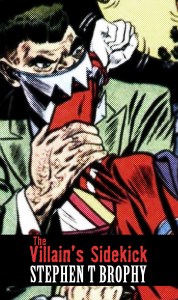 When professional henchman Duke “HandCannon” LaRue runs afoul of the city’s protector, Nightguard, and his spritely sidekick Twiliter during a routine smash and grab job, everything he thinks he knows about villainy, heroism, and making a fast buck is about to get turned on his steel-plated head. The job goes south in a hurry, and his supervillainous employer, Dr. Eye, is none-too-thrilled about it. But those complications are nothing compared to an unexpected custody visit from his six-year-old daughter, the kind of kid who thinks her deadbeat dad hung the moon, not tried to blow it up.

What Inspired You to Write Your Book?
I started calling myself a writer in the 2nd grade, and after hundreds of false starts, I found myself doing it professionally by the time I hit my early 30s. I moved away from writing narrative fiction into script writing, but after a long time creating things that were rarely read, much less produced, I started longing to return to prose and projects over which I had complete control. I’ve been working on a much more sprawling novel with similar subject matter, but have been stuck on the climax, so I decided to take a break and dash off a short story idea I was kicking around. As I wrote, that short piece evolved into this novella, and with a few ideas in mind about self-publishing, and a great piece of cover art a friend threw together, I went ahead and made the plunge and put it out in the world. The reception has been terrific and sales have been middlingly respectable.

How Did You Come up With Your Characters?
I’ve been reading a lot of comics in the midst of my mid-life crisis and in the last few years I stumbled across this subgenre of superhero prose (some call it capepunk, which I kind of like). I wanted to write something in that vein, and I hit on the idea of telling the story of a minor henchman with a machine gun arm and a steel jaw, the sort of character that would be portrayed very one-dimensionally as he gave the heroes hell in a mainstream superhero story. But I started to wonder what his regular life and mundane habits might be like, what his apartment was like, did he have pets, friends family, etc. I’m a recovering addict so my guy’s a 12-stepper. So the character of HandCannon was born, and I’ve since fallen in love with him enough to write a companion prequel and the full length sequel I’m working on now. Most of the other characters are extrapolations/homages based on various popular comic book archetypes, from Batman and Superman to Black Widow and Batgirl.

Book Sample
I am in the middle of getting my ass handed to me by Houston’s favorite urban vigilante, Nightguard, when I remember I forgot to feed Mrs. Lady. As his armored shockwave glove sends me a good seven inches into the side of a brick wall, I feel the steel plate beneath my shaved skull vibrate, and probably dent a little, but I’m really thinking of little else besides my sweet girl howling at no one as she stands next to an empty food bowl in a dark, lonely fourth-floor walkup. I mean, what kind of asshole leaves a diabetic cat to fend for itself while he’s out playing dress-up and fighting superdudes?

I know I’ve got to end this quick, and the odds of it coming out in my favor are slim to none. Nightguard’s already managed to jam the barrels of my prosthetic gun-arm, and really, what good is a supervillain’s henchman with the codename HandCannon if the very thing he’s known for is currently useless to him? I lead the fight out of the alleyway and across Wharf St. toward the waterway. The knockdown drag-out started several blocks away on the other side of the ship channel, near the Port Authority and I don’t really remember how we ended up on this side, in a low-rent Houston slum neighborhood off Broadway. Once we’re close enough, I put up a good show like I’m about to unleash my full seven-foot, quarter-ton body-armored and heavily weaponized fury on Nightguard, but instead I let him knock me clean into the water, where the weight of all my prostheses and accessories lets me sink to the bottom of the slime and filth. Once immersed, I quickly plug an oxygen filter over my nose and mouth so I won’t let up any telltale bubbles. I stay down for a long-ass time, knowing full well that he won’t come in after me any more than he believes he’s seen the last of me. The water is absolutely disgusting and so dark I can’t help twitching every time I feel something brush against me, whether it’s fish or garbage or some foul thing that shouldn’t even be, I don’t know. One thing’s for sure, if I live long enough to die of cancer, this’ll be just one of a million possible reasons, along with whatever the hell me and Heatsource were supposed to boost from that shipping container. What happened to Heatsource? If he already ran, screw him, I’ll take it up with him later. If he’s still somewhere back there, in the clutches of Nightguard or his little miniskirted jailbait sidekick, Twiliter, well, screw him twice. He’s on his own.

By the time I figure the coast must be clear and drag my ass out of the Houston ship channel toward home, it’s nearly dawn, that depressing all-night early morning graylight just tickling the horizon. I’m a helluva sight to the few late-night stragglers and early morning laborers who catch a glimpse of me, water-logged and muscle-bound, a hulking behemoth in combat boots, fatigue pants, leather ammo harness peeking out from my unzipped hoodie, my steel lower jaw slightly askew from one of Nightguard’s power-punches, my good eye set to perma-glower while the red light of my optic implant looks even angrier. A cab driver drops his coffee, clearly terrified, while a late-shift streetwalker just sizes me up and smirks at the absurdity of my entire being. The fact that I’ll have to explain the evening’s miserable failure to the moody son-of-a-bitch who’s my current employer just compounds the bad feelings as I do my supervillain walk of shame.

About the Author:
Stephen T. Brophy is a living human male. He resides in the principality of Los Angeles, California USA. He works in television production and makes his living answering the rhetorical question, “Reality TV has writers?” He loves his wife Danielle, his son Ash, his dogs Griff and Tex, science fiction, funnybooks, movies and sleep in more or less that order. Sleep might be higher on the list these days, but he doesn’t want to piss anyone off by bumping them.