You are here: Home / Fiction / Science Fiction / The Vanguard by SJ Griffin 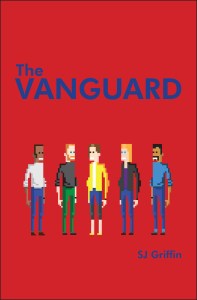 ‘And so a time will come to pass when the vanguard will emerge from the underground to battle the forces of darkness for the first of the final times. There will be five to face these foes. One to speak in tongues, one to cleanse in flame, one to stand beyond sight, one to read beyond the veil and one to move the earth.’

In the city that will not drown but cannot swim, Sorcha Blades keeps her head above water by wheeling, dealing and stealing. But when an accident gifts her and four friends with talents their world has never seen, they must take a stand against the angels and their acolytes before everything they never knew they cared about is swept away.

What Inspired You to Write Your Book?
I have always loved science fiction, fantasy and dystopian books. There’s a lot of things I love in this book and the rest of the trilogy. They are the things that have inspired me. Graphic novels, films, books, even computer games. David Bowie. It’s a long list that was formed over a long time.

How Did You Come up With Your Characters?
The main character just sort of fell into my head. Named. Dressed. With a voice. It was a very odd gift. The rest of her gang sorted of siddled up to her and then the rest of the cast fitted in with them and the story. The whole trilogy was very character driven in a way, which I suppose is unusual for that kind of book. Naming them was great fun.

About the Author:
SJ Griffin became a woman after successfully completing many years as a girl. After stints as an actor, a petrol station attendant, a copywriter, an editor, an amateur bike mechanic, a burger flipper, a playwright and riding an old fashioned bicycle in order to sell melting ice creams it became abundantly clear that the only thing she really wanted to do was write novels. So that’s what she does. As a result she is far more pleasant to be around.