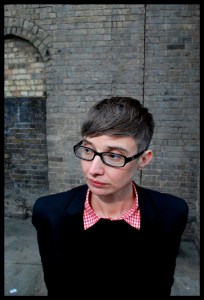 About SJ Griffin:
SJ Griffin became a woman after successfully completing many years as a girl. After stints as an actor, a petrol station attendant, a copywriter, an editor, an amateur bike mechanic, a burger flipper, a playwright and riding an old fashioned bicycle in order to sell melting ice creams it became abundantly clear that the only thing she really wanted to do was write novels. So that’s what she does. As a result she is far more pleasant to be around.

The Vanguard Trilogy is the first stage of a long term strategy to remain pleasant to be around, for the general good of humanity. The final part, or the finale some might say, was published in April 2014. She’s currently working on her fourth book.

What inspires you to write?
Most things, to be honest. With the Vanguard Trilogy the main character fell into my head, well developed and fleshed out and then it was a long process of piecing together a story and a world. There’s a lot of things I love in the trilogy, influences and inspirations, like graphic novels, films, books, even computer games. David Bowie probably. My new book started as almost a tribute to Sam Spade and Philip Marlow but the main character shifted the emphasis a little. I think everything is up for grabs, anything can be inspiring. My phone is full of cryptic notes that I stop in the street to jot down. People are always bumping into me.

Tell us about your writing process.
I write down on a scrap of paper, in a sentence or two, what I want to put in the book. One scrap for each event, action or idea. I might write ‘Sorcha discovers what’s worrying Minos’, ‘the car falls from the flyover’ or ‘the gang meet Prophet’. I end up with a huge heap of them. Then I put them in order. This way I get all the scenes I want in the book out of my head and in some organised structure. And because they’re on scrappy bits of paper they don’t feel precious or fixed. That’s the most useful thing I do, I think. It’s a nice non-threatening way of starting to actually write. Instead of dreaming and hoping the book will write itself. We all do that, right? Ah, the self writing book. How I yearn for it.

For Fiction Writers: Do you listen (or talk to) to your characters?
I think I kind of inhabit them. I did a Master’s at drama school so I think I have a quite actorly approach. Like Brando I am method! I write in the first person so that idea of the writer some how performing the narrative seems to make sense. To me at least. I have been caught gesticulting and muttering while walking down the street but it might just have been a bad day rather than any writing going on.

What advice would you give other writers?
Write. Write everyday, if you can. Intend to write every day. Write. Make it a habit. It doesn’t matter what you write. A journal is great. Tell a notebook what you had for breakfast. I think the idea that you have to write a fabulous short story or create hilarious characters right off is horrible and crippling. Just write about your breakfast and the rest will follow. All the best writers kept journals – make sense. Just write. You’ll then find it’s easier to write than not write if you are a writer. You already know that though.

How did you decide how to publish your books?
I decided to self publish the Vanguard because an agent told me that I would have to wait until I’d written all three books before anyone would look at them because no one had heard of me. I was not pleased. I thought I would publish them via KDP one at a time then go back to the agent. Then I discovered Smashwords and I haven’t bothered to go back. It started off as a bit of a rebellious protest but it’s worked out really well.

What do you think about the future of book publishing?
It’s all a bit cloudy and uncertain at the moment, isn’t it? I think traditional publishers are going to have to add some value to what they offer writers, because the independent publishing community is thriving. And wonderfully supportive. I think a mixture of the two would suit me so I hope the bickering between the new and old schools of publishing gets resolved, and gets results.