You are here: Home / Fiction / The Triple Six by G. Randolph Miller 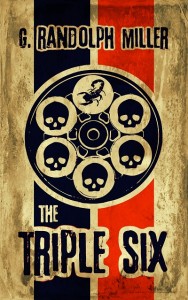 Professional wheelman and former racecar driver, Roland Spivey has been marked for death by a national crime syndicate and the only way he can save his life and the woman he loves is to play a game of death called the Triple Six. Developed by regional bosses for their wagering entertainment and thirst for inflicting abuse on condemned cohorts, the Triple Six obligates the ill-fated to complete six contract kills – with just six bullets – in only six hours. But with lives at stake and millions of dollars on the line is the Triple Six the only game being played?

‘The Triple Six’ is the debut novella of author G. Randolph Miller.

What Inspired You to Write Your Book?
I’ve been writing screenplays as a hobby for nearly twenty years with never truly trying to sell one. I suppose a part of me wanted to sell them but since I was never truly satisfied with the finished product I never really attacked it like I should have. However one screenplay that I kept going back to and the one that people kept encouraging me to try to sell was one titled The Triple Six. Around 1999 I had written a brief, ten page script of it while in a college writing class. From there I took it to a full, feature length screenplay and from there to the shelf, collecting dust. Then I was encouraged by my wife, Alicia to try and sell it as she believed it would make a great movie. So I wrote some log lines and submitted it. It garnered some light interest, but no buyers. That happens but knowing I would never have the money to produce the film on my own it was either leave the story where it was, on the shelf collecting dust or try something new and different. That ended up being the product you see here. This is the novelization of the screenplay, with a revision or two, which according to those who’ve read both makes the story even better. This is my first attempt at writing a book so I appreciate any feedback.

How Did You Come up With Your Characters?
The characters come from my interests in film and sports. I’ve always loved gangster films, car films and sports so I wanted to write a story that could meld the three together.

Book Sample
Maceo Banks had a lavish, loft style office inside the warehouse of his nefarious drug trafficking and chop shop operation. Regaining consciousness, Roland found himself there, zip tied to a chair in front of a sizeable, executive style desk. Maceo sat relaxed in a plush, high backed leather chair across from him. The austere, fifty year-old black gangster delicately picked at his cuticles with a large Bowie knife and patiently waited for Roland to regain consciousness.
“There’s our boy,” Maceo said. “He’s starting to clear those cobwebs.”
Gaining coherence, Roland further surveyed the office. He was not alone with Maceo. Standing to his left was Norton, Maceo’s gorilla-like, armed bodyguard who resembled an older, Elvis Presley on steroids.
“You awake, Spivey?” Maceo asked.
“Uh, yeah, I’m getting there,” Roland weakly replied.
“Better make sure because I want you to be completely cognizant of the serious situation you’re in.”
“I’m awake. What’s going on here, Mace?”
“You’re in one helluva mess is what’s going on. You didn’t bring in the load and you failed to cap the reverend.”
“How do you even know that, Mace?”
“After you showed hesitation on the phone I had my boy Norton here tail your ass. He gave me a call and filled me in.”
“Well did he tell you there wasn’t a load for me to bring in?”
“Oh, I suppose I should take your word for it that this pathetic, half piece is all the reverend had on him?” Maceo asked as he took his knife and cut open the small baggy of product. “It still doesn’t change the fact you didn’t ice him.”
“I’d never kill a holy man.”
“I told you to ice that damn fool!” Maceo screamed as he slung the heroin bag against the wall, sending the powder flying into a cloud of dust. “A man doesn’t become holy by simply toting a Bible.”
“What do you want me to say, Mace? I’m a lousy hit man.”
“That you are, Spivey. However, you are one helluva driver.”
“How is that even relevant, Mace?” Roland asked slightly confused.
“Norton,” Maceo replied as he motioned in Roland’s direction with his knife.
Norton stepped toward Roland and hit him across the left side of his jaw with a powerful right hook. Roland’s head snapped to the side from the jarring shot and he groaned in pain. After allowing him a few moments to recover, Maceo smiled, stood up and calmly walked around to the front of his desk. He then leaned over and pointed the edge of his blade at Roland’s jugular.
“If it benefits me and my organization it’s relevant,” Maceo said with a cold, callous tone.
“So what is it then? Did you get me a ride in the next 500?”
“The 500? No, this is much, much bigger than that.”
“Nothing is bigger than Indy.”
“In racing that may be the case but you’re not a racecar driver anymore. You belong to me. That’s why I’ve contacted the syndicate and arranged for you to run the next Triple Six.”
Roland scoffed, “Like hell I will.”
Maceo looked at Norton and motioned again. Norton didn’t hesitate. He laid into Roland with another wallop to the jaw.
“You’re going to run it because if you don’t, I’ll take this knife and gut you like a dirty pig.”
“Go ahead. I’m not playing that sick game,” Roland said still wincing from the punch.
Norton looked to Maceo for the go-ahead to deliver another blow but was waved off. Instead, Maceo nodded to the door and Norton left the office.
“You are going to play the game, Spivey and you will play it well. And you know how I know?” Maceo asked.
“Enlighten me,” Roland replied.
“Like I said, you’re a helluva driver. You can get from one point to another faster than anyone I’ve ever seen. Now that’s an element many overlook when assigning a Triple Six but I certainly haven’t. That aside, my word against yours and the syndicate is going to think you went rogue on a drug deal out of your assigned territory. That would be very bad for you. But if that’s not enough to get you to play ball, well I’m going to give you some extra incentive.”
Maceo snapped his fingers. On cue Norton returned pushing a bound and hooded woman through the door. He forced her over to the desk and removed her hood.
“Look familiar?” Maceo said with a cold-blooded inflection.
It was Corinne. She had been roughed up. Her eyes were blackened, mouth duct taped shut and she was visibly shaken.
“You piece of shit!” Roland snapped.
“Norton!”
Norton laid into Roland again with a face breaking haymaker.
“You’re going to run the Triple Six because if you don’t, I’ll not only gut you, I’ll gut this two timing bitch you’ve grown fond of as well. And you had the audacity to think I didn’t know. I know everything motherfucker, everything!” Maceo declared with the venom of a hundred cobras. He then took a moment to regain some composure. “Did you frisk and disarm him, Norton?”
“Of course,” Norton answered.
“Then these are no longer necessary,” Maceo said as he took his knife and cut Roland’s zip tie restraints. He then returned to his chair, sat down and looked to Corinne. An evil, slow burn stare that would torch a hole through anyone washed across Maceo’s face. “All this time I thought you only had eyes for me. Take her home, Norton.”
Norton grabbed Corinne by the arm and forcefully led her out the door. Maceo then turned his attention back to Roland.
“So Spivey, back to the-”
“I’ll need a fast car.”
Smiling in victory, Maceo opened his desk drawer, grabbed a stack of bills and tossed them onto Roland’s lap. Roland looked down at the money and saw the brown band indicating five thousand dollars.
“Faster than that,” Roland scoffed as he looked back to Maceo.

Buy The Triple Six On Amazon